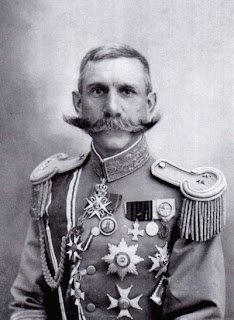 Last week's acquisition of a prized set of Tibetan furniture now gives LACMA "the most comprehensive public collection in the world" of Tibetan and Nepalese art, according to a press release. This comes seven months after unveiling "the largest permanent space devoted to Korean art outside of South Korea." You won't hear many superlatives about the museum's Chinese art, though. It's now been four years that the department has gone without a curator. The museum's sketchy Chinese collection has been off view for most of that time, with no return in sight. Is Chinese art jinxed at LACMA? You might think so, and the man to blame might be General Johan Wilhelm Normann Munthe (1864-1935).
General Munthe looked like he was invented by Terry Gilliam. Indeed he was self-invented, down to his medals. Born in Bergen, Norway, Munthe drifted to Qing dynasty China, taking a job as a customs inspector. Munthe was no man to be satisfied with a desk job. "He loved danger, was the first in a fight, a devil to fight and a devil to love," author Nils Collett Vogt put it (1934). Munthe entered the Chinese military in the age of the Boxer Rebellion, working his way up to General, an unprecedented distinction for a Westerner. Munthe became right-hand man to Yuan Shikai, the Nationalist Chinese President who declared himself Emperor for a few giddy months in 1916. (Four years earlier, Yuan had forced the abdication of the proper "Last Emperor" of the Qing, Puyi.) As China burned, Munthe fiddled with medals. The Chinese had not awarded medals, and Munthe thought that was a bloody shame. He designed the profusion of Euro-style gewgaws littering the chests of Yuan and himself in photos.
Munthe was in the right place and time to collect Chinese art. During the decline and fall of the Qing dynasty, everything that wasn't nailed down was for sale, at a price. From New York, J.P. Morgan negotiated to buy the Chinese Imperial collection — the equivalent of buying the Louvre from Louis XVI. To the great relief of China's aesthetes, Morgan died in 1913 without having struck a deal. This opened the field for smaller operators like Munthe. "In the past year I have been able to significantly enrich my collections," Munthe reported in 1915. "The reason is this: After the revolution, the former major eunuchs had to sell their stuff. One could now buy things…" That, and the guanxi Munthe had acquired in his brilliant career, allowed him to ship crate loads of Chinese treasures to the West, no questions asked.
After a few years of fevered buying, Munthe realized he was as much a creature of the Qing as its eunuchs. Chiang Kai-shek supplanted Yuan Shikai. Munthe elected to call it career and return home to Norway.
That's where Los Angeles comes into the picture. In 1926 Munthe offered to sell his collection of Chinese art to the Los Angeles Museum of History, Science, and Art in Exposition Park. The museum was only 13 years old and had made scant progress in collecting any of the fine things in its name. Museum director William Bryan, an ornithologist, sensed that the Munthe collection would be a way to put the museum's art department on the map. He arranged to take it on approval. When it went on display in 1927, it was hailed as the equal or better of any collection of art then on display in the Western U.S. Some went so far as to compare the Munthe collection to the superb Freer Gallery, which had opened only four years previously in Washington.
Bryan lost no time in lobbying to get the money to buy the works. He knew he had an uphill battle. The asking price was nearly $1 million, an astonishing amount for the time. To put that in context, in 1926 Henry Huntington paid $380,000 for Thomas Lawrence's Pinkie, which was — incredibly — the highest price ever paid at auction for any work of art.
Bryan informed the county supervisors that he had discussed the Munthe acquisition with every Asian art curator in country. At any rate, one expert, Berthold Laufer of Chicago's Field Museum, was brought out to Los Angeles to evaluate the collection, and he endorsed the acquisition enthusiastically.
This convinced the county. In 1930, after the market crash, the supervisors advanced $200,000 to buy Munthe’s 118 ceramics. They took an option to buy the rest of the collection for $400,000. This was the first time the county had ever made a significant expenditure for art. The $600,000 total would be the equivalent of $7.8 million today, more than LACMA has paid for any work of art other than Richard Serra's Band (purchased in 2008 for a bit under $10 million, courtesy of Eli Broad). 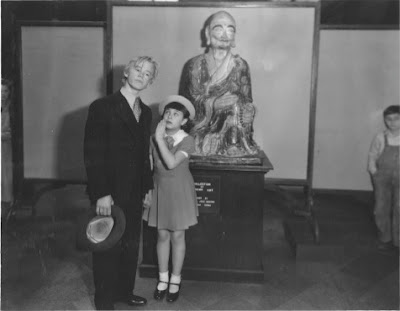 Above is a mid-1930s installation view of the Munthe collection. In best Hollywood style, two comic child actors, Bill Benedict and Jane Withers, upstage the high-art statue. Behind the scenes, there was then bitter debate over the age and authenticity of Munthe's statues — and it was no laughing matter. Sinophiles flocked to Los Angeles, an unfamiliar city for most. Alfred Salmony was the first to declare that the Munthe collection was junk. The collection was a farrago of copies, forgeries, and tourist bric-a-brac. Salmony's views were echoed by many others. It was not until 1940, however, that Bryan’s successor, Roland McKinney, faced the music and admitted that the Munthe collection “is of such doubtful authenticity as to be unworthy of exhibition in this museum.” It's hard to say what Berthold Laufer would have thought: In 1934 he jumped from the top of his Chicago hotel building to his death.
Evidently, Munthe was either a con artist, or a world-class dupe of Chinese con artists. Probably more the latter. The Munthe collection, it was learned, had been offered to every major museum in America. Munthe must have been pretty far down the list when he approached Los Angeles. 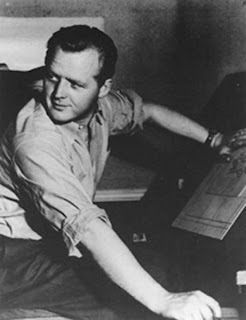 The county supervisors were appalled. They spun into tea party mode, vowing never again to spend a penny for any art acquisitions (least of all for Chinese art, which they understood to be a scam). Munthe still had his supporters, though. One was Millard Sheets (right), the American Scene painter best known for Angel's Flight. Sheets was a pet of museum bulwark Howard Ahmanson, who commissioned him to design artsy facades for his Home Savings and Loan buildings. And Sheets fancied himself a connoisseur of Asian art. In Sheets' humble opinion, the Munthe collection had gotten a bum rap. It was great, it was deep, the eggheads didn't understand it. That view didn't get much traction. But Sheets was a professor at Claremont College. He asked to have the unpurchased Munthe works, including big sculptures, moved to Claremont. Henry Trubner, the Los Angeles Museum's Asian curator, gladly acquiesced. He was glad to get rid of the stuff.
This was in 1947, with Munthe years in his grave. Eventually his estate got around to asking what happened to the collection. The pieces were crated up and returned to Munthe’s hometown of Bergen, Norway, where they are now displayed at the Vestlandske Kunstindustrimuseum (West Norway Museum of Decorative Art). Scholars are still debating what's real and what's not. 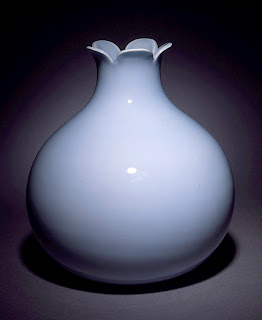 As to the hundred-odd ceramics the Los Angeles Museum bought, at least some are important. One is a voluptuous claire de lune vase in the shape of a pomegranate (right). It was displayed in the permanent collection galleries, back when LACMA displayed Chinese art.
Munthe casts a long shadow. In a few short years, the art division of Los Angeles' flagship museum went from being the West Coast Freer to an encyclopedic museum with a chronic deficiency of Chinese art. That hasn't changed much, even as the art division was spun off into a new museum in Hancock Park. In 2006 LACMA Asian curator J. Keith Wilson left to take a job at the Freer Gallery (the East Coast one). The uneven Chinese collection is one reason it's been so hard to recruit a successor. With no curator of Chinese art, there's no one to lobby for exhibition space and building the collection.
Last year LACMA acquired what could be taken as a memento of the Munthe affair. It's an Asian-influenced screen (below) by Millard Sheets. Believed to date from 1930s, Sheets' screen is evidence of the West Coast's burgeoning fascination with the East, something seen in such different artists as Stanton MacDonald-Wright and John McLaughlin. The Munthe collection was a touchstone for that interest, and Sheets would have been aware of Munthe's Chinese paintings when he created it. 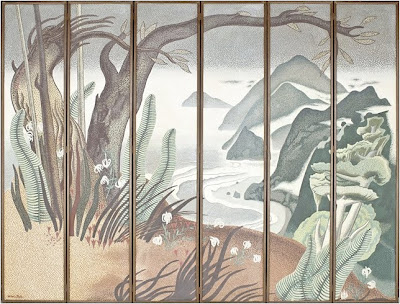 scott davidson said…
What an interesting blog, introduced by a thought-provoking photo. The unusual wall painting of the dwellings is also a strangely modern interpretation. Something like this hieroglyphic view of a park by Swiss painter Paul Klee, http://EN.WahooArt.com/A55A04/w.nsf/OPRA/BRUE-8LT475.
The image can be seen at wahooart.com who can supply you with a canvas print of it.