Big Donation from the Resnicks 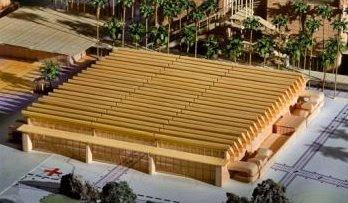 LACMA is to announce a donation of cash and art from Franklin Mint/Fiji Water/Teleflora tycoons Lynda and Stewart Resnick. The money (a new $20 commitment on top of the previously announced $25 million) will go to build a new Renzo Piano-designed exhibition pavilion behind the Broad Contemporary Art Museum and scheduled for completion in 2010. A model looks like a clone of Dia:Beacon. The New York Times announcement (as usual, they scooped the Los Angeles Times) is notable for what it doesn't say. Michael Govan previously envisioned this building as a venue for contemporary art. Now it's the Lynda and Stewart Resnick Exhbition Pavilion, and the word "contemporary" seems to have been dropped from the description. The Resnicks collect Old Masters, and the few pieces that have been lent to the Getty in recent years are unexciting. Tellingly, the value of the promised art donation is pegged at $10 million (which might buy a minor Lancret). No word on whether Lynda will be donating the Jackie O faux pearls she bought at auction - formerly on display at the Franklin Mint Museum in Pennsylvania..
Email Post
Labels: Franklin Mint LACMA Renzo Piano Resnick