Beautiful Science at the Huntington 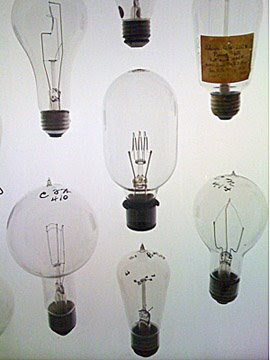 Practically nobody has paid attention to L.A's greatest cultural coup of recent years. It's the Huntington Library's acquisition of the Dibner collection of scientific rare books, manuscripts, and artifacts. Enter the library building's new Dibner Hall of the History of Science, and you'll experience something you can't find anywhere else in the U.S. New York and Washington have this kind of material and never display it. There are Exploratorium-esque science museums from coast to coast, and they're fine things. You can't compare them to this. That would be like comparing Six Flags to the Morgan Library. Between the Dibner trove and the Huntington's existing holdings, San Marino now has the nation's best history of science in objects: a 1279 French gothic manuscript of Ptolemy's Almagest; Newton's copy of Opticks with corrections in his own hand; letters of Darwin and Einstein; first editions of Copernicus, Kepler, Galileo, Franklin, Pasteur, Watson and Crick; monomaniac assemblages of early sundials and Edison's light bulbs. The permanent-temporary exhibition has been titled "Beautiful Science." Many of the books are illustrated and surprisingly beautiful; or failing that, surpassingly odd. Imagine a Getty Research Institute show of the wildest artist's books. It's something like that, only the MFAs couldn't begin to outweird renaissance medical texts.
Bern Dibner was an electrical engineer who assembled a 60,000-plus volume collection. In 1974 he gave a quarter of his holdings to the Smithsonian. Dibner died in 1988 without leaving specific instructions for the remainder. His family lent the cache to MIT, seemingly a suitable home. The MIT deal "didn't click," said library director Philip Cronenwett, citing a "lack of interest that we showed toward MIT and the lack of interest that MIT showed toward us." Dibner's son David launched a nationwide search for a new home for the collection. The 16 candidates included Johns Hopkins and the University of Pittsburgh/Carnegie-Mellon. In 2005 the Pittsburgh Post-Gazette broke the story of "A Plan Afoot to Move Isaac Newton to Pittsburgh." That article may have nixed Pittsburgh's chances. According to Huntington curator Daniel Lewis, an unamed applicant "made the mistake of saying, in the midst of the process, that they'd already gotten the collection. That was it for them when David found out."
In 2006 the Huntington Library won. The Huntington already had substantial holdings of scientific books and papers, and it has the gardens and Blue Boy to draw the crowds. The Dibner material was donated, along with a $11.6 million endowment, on the condition that the Huntington create a permanent exhibition hall and do a temporary show every three years. 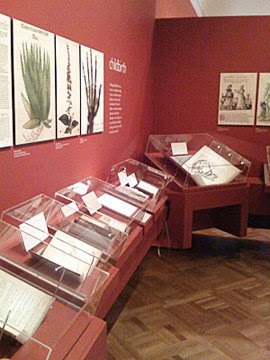 The installation is credited to Gordon Chun Design, which has worked for the Exploratorium and other Bay area museums. The Huntington press releases promised "interactive" exhibits. I was a little leery of that. Suppose they announced interactive exhibits to complement their Wallace Stevens materials. Not a good thing, right?
Fortunately the interactive stuff is relatively intelligent and doesn't overwhelm the old books. The problem is a lack of imagination and maybe money. Gallery design is a subjective thing. Either you feel you're in a good space or you don't. This is less appealing than the main library hall even though it tries a lot harder. The general effect is busy. Wall texts attempt to synopsize the whole history of science. Teacher, my brain is full!
Lately the Huntington has had a serious problem with lucite. Not just here but in the mansion too, objects are encased in lucite cubes. In the Dibner Hall, every single book or letter gets its own vitrine. This creates a distracting maze of edges and reflections. I imagine they did things this way so that it's easier to swap objects in and out. The Huntington promises regular rotations, and that's great. The vitrines aren't.
Free audio phones have actor Michael York reading passages from 14 works. You have to admire the guy. York works Norman Lockyer's Studies in Spectrum Analysis (1878) as if it were The Taming of the Shrew, or maybe a philharmonic society's field-trip narration to Peter and the Wolf. Who is this for? Children? Postdocs? Austin Powers fans?
Email Post
Labels: Albert Einstein Bern Dibner Huntington Library Isaac Newton Massachusetts Institute of Technology Michael York