The Politician Who Paints 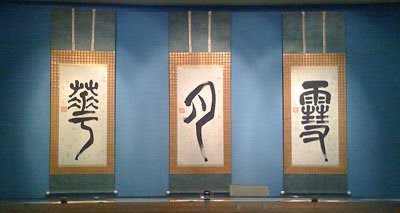 For perspective on the Congressional debate over whether the arts produce "real jobs," consider a 2008 gift of LACMA's Japanese Art Acquisitions Committee, now on view in the Japanese Pavilion. Snow, Moon, Flower is a three-part calligraphy by Lord Tokugawa Nariaki. The artist is far better known as a statesman of the late Edo era. Nariaki's suave calligraphy demonstrates the cultural chasm between Edo Japan and 21st-century America. Can you imagine any American politician achieving something like that? Or wanting to? 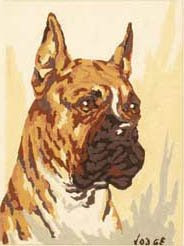 The last, maybe the only, U.S. President to exhibit his paintings was Dwight Eisenhower. While his CIA was promoting abstract expressionism as an instrument of foreign policy, Eisenhower himself was dabbling in the representational mode. He had a studio on the second floor of the White House, where he could stop in to paint between meetings. Eisenhower's letters to Winston Churchill usually swap notes on their respective oeuvres. More alarmingly, Ike took up the 1950s craze for paint-by-number. In 1954 Eisenhower's appointment secretary Thomas Edwin Stevens distributed paint-by-number kits to administration officials, initiating a kitsch renaissance at the highest levels of government. He let cabinet officials believe that Ike wanted them to paint something and would be disappointed if they let him down. 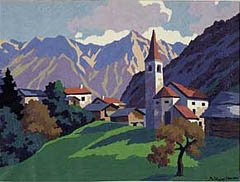 Stevens organized an exhibition of the results at the White House. Two of the efforts: Dog by U.N. Ambassador Henry Cabot Lodge Jr., and Swiss Village by FBI chief J. Edgar Hoover. Maybe the most incredible thing is that the show appears to have generated no controversy. (Can you imagine the press, had W.'s White House mounted a small show of Thomas Kinkade?) Perhaps the gulf between Tokugawa Nariaki's academic style and J. Edgar Hoover's thrift-shop aesthetic wasn't all that great. "All kitsch is academic," Clement Greenberg wrote, "and conversely, all that is academic is kitsch."
For more, see the great website for a 2001 show at the National Museum of American History, "Paint by Number: Accounting for Taste in the 1950s."
Email Post
Labels: abstract expressionism Clement Greenberg Dwight Eisenhower Henry Cabot Lodge J. Edgar Hoover LACMA paint-by-number Tokugawa Nariaki