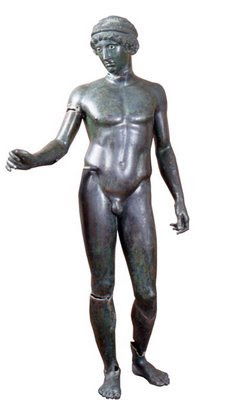 Reuters is reporting that the Getty will restore and display, for two years, two life-size bronzes found in Pompeii, the Ephebe as Lampbearer (pictured) and Apollo as Archer. Both are keynote pieces at the National Archaeological Museum in Naples. Though not reported in the U.S. press, the story is (relatively) old news in the blogosphere; see last month's post in Blogging Pompeii. In any case, it's further proof that Italy is serious about lending major antiquities to the Getty. The Naples Museum owns the original Villa dei Papiri bronze sculptures, copies of which are shown in the Getty Villa's gardens.
Email Post
Labels: Getty Villa Naples National Archaelogical Museum