Dig Him Up and Shake His Hand 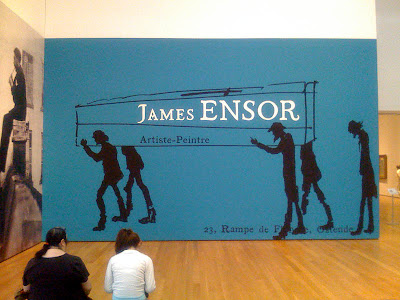 What MOMA wants, MOMA usually gets. Not too many paragraphs into every review of the Museum of Modern Art's James Ensor show is a mention of the fact that the artist's most famous work is not on view. That is Christ's Entry into Brussels in 1889, owned by the Getty Museum and deemed too delicate to travel to New York. Half the reviews insinuate this is another whiny L.A. excuse, like Jeremy Piven and the sushi.
Whatever. The MOMA show is an authentic knockout minus one. It lends insight into Ensor's achievement generally and into Christ's Entry particularly. It's not coming to Los Angeles, but one advantage of the virtual age is the show's website, which includes images and two complete chapters from the catalog.
Ensor is primarily known as a painter of the macabre and phantasmagoric. MOMA acknowledges that with a mural blow-up of one of Ensor's creepy-kooky business cards. Conceivably the best of the many mask and skeleton paintings on view is the Kimbell Museum's Skeletons Warming Themselves. Wealthy museums in the American West really did stake their claim on Ensor. 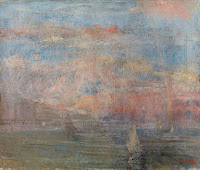 The show surprises by highlighting other phases of Ensor's art. One is the importance of light and abstraction. Around 1880 Ensor was painting luminous, sky-dominated landscapes verging on complete abstraction. In paintings like The Rainbow (After the Storm) (shown at right), he's "ahead" of Monet and the nascent post-impressionists. MOMA's Alfred Barr said as much (at least when he was trying to justify the purchase of Ensor's remarkable Tribulation of St. Anthony). In these paintings, the main precedent is Turner. Ensor nails a certain kind of filmy, humid, late-in-the-day marine light. Not the least remarkable thing about these pictures is that few would recognize them as the work of James Ensor. 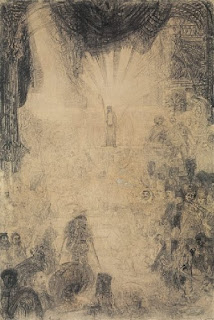 The wall where the Getty painting would have hung shows two large, amazing drawings. Each is a crowd scene is which radiant, Rembrandtesque light distinguishes Christ from the massed, horror-vacui detail around him. (Shown, The Rising: Christ Shown to the People, 1885). Ensor merged the subjects of the two big drawings into a small one, now owned by the Getty (and lent). This in turn was a study for the 14-foot painting of Christ's Entry into Brussels in 1889. 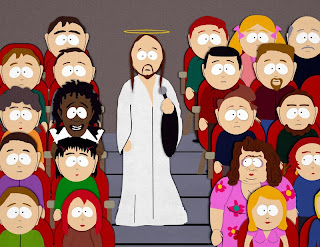 The drawings and numerous prints exemplify Ensor's predilection for what Time's Richard Lacayo called South Park crowds. Ensor uses crowds as a means of establishing vertiginous perspective (most notably in the Getty painting). Faces are multiplied, as if digitally, yet inexhaustibly individualized. A small pencil study of googly-eyed mask expressions is an animation model sheet before the fact.
In number of objects, the show's largest lender seems to be the Thomas and Lore Firman print collection, known to Los Angeles audiences for their loans to Ensor exhibitions at LACMA and the Getty. The MOMA show includes many works on paper not shown in Los Angeles, including a drawing of Ensor's dead father that recalls Man Ray's photo of the late Marcel Proust.
Ensor's reputation might be even higher were it not for his early burn out. Most of what he's remembered for predates his 40th birthday. That would be no problem, had he died at 40. Bummer: He lived to 89. Art history's death panel takes a dim view of that. Ensor spent the last two-thirds of his adult life repeating himself, even duplicating Christ's Entry into Brussels (with an assistant, in gouache) as a tapestry cartoon. MOMA nonetheless offers a room of the disparaged post-1900 paintings. One surprise is a weirdly Florine Stettheimer treatment of The Finding of Moses lent by the Berkeley Art Museum.
The most contemporary thing about Ensor is his refusal to be serious. The show brings together dozens of his satirical paintings and prints, all astonishing, most funny, and most second-rate. The thing is, Ensor's best, most ambitious works are unserious too. (His dullest paintings, from the beginning of his career, are dead earnest.) A Man of Sorrows morphs the Christian icon with a Noh mask and (naturally) a self-portrait. Its adolescent, menacing-hippie vibe is more Helter-Skelter than Les XX.
Email Post
Labels: Getty Museum James Ensor Museum of Modern Art Richard Lacayo South Park They Might Be Giants

scott davidson said…
I pondered to myself recently what were the most important things in my life. The answer seems to be clear that art was up there in importance. Why? Frankly, I don't really know. May be someone here can enlighten me?
As was my wont when I have some free time, I browsed the marvelous site, wahooart.com, where they keep thousands of digital images for customers to select to have printed into handsome canvas prints for their homes.
This image jumped out to jolt my reveries: Still life with bread, by the Cubist Georges Braque. Is art like this picture, as essential as bread and water, or should I say bread and wine?