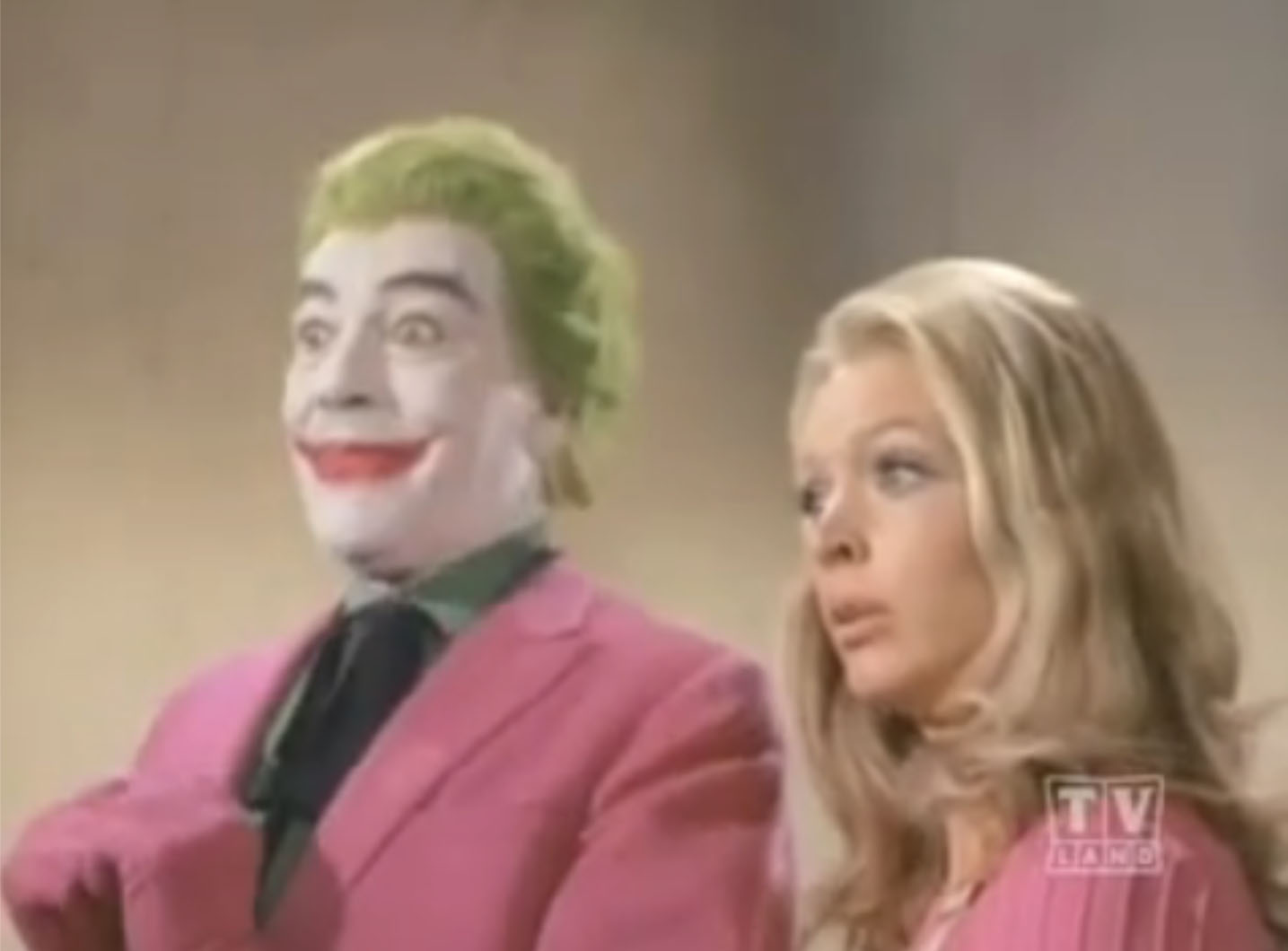 A gay guy in a fright wig hangs out with a bored rich girl named “Baby Jane.” It’s not Andy Warhol and Jane Holzer but a story arc on the 1960s TV version of Batman. In two episodes that aired in March 1967, the Joker (Cesar Romero) takes up art and has an unwitting partner in “Baby Jane” Towser. That name can’t be a coincidence: Warhol superstar “Baby Jane” Holzer had already appeared in several Warhol films, notably Batman Dracula (1964), and been profiled by Tom Wolfe. One Batman episode’s title, “Pop Goes the Joker,” is a clear reference to the pop movement.

Despite that, there’s no pop art per se—unless you count a fight-scene title card that rips off Ed Ruscha‘s 1962 OOF. It seems the Joker has traditionalist tastes in art (“I swear it on a stack of Blue Boys!”) and covets Renaissance paintings. To get them, he turns to the most monstrous of all cons—contemporary art, naturally. The result, credited to TV writer Stanford Sherman, is a time capsule of middlebrow views on the avant-garde.

The Joker begins by assassinating his art-historic predecessors. Victim #1 is an American Scene painter (a version of American Gothic is visible among his works). The Joker shows up at the American Scener’s show and defaces his masterpieces with paint guns. (This prefigures a better-known bit in the Tim Burton Batman.) But the American Scene guy is delighted; he could never get that modern stuff right and now can sell his works as drip paintings. Ergo, Batman can’t arrest the Joker: “We have no choice, Robin. He’s committed no crime; in fact he’s increased the value of these paintings.” 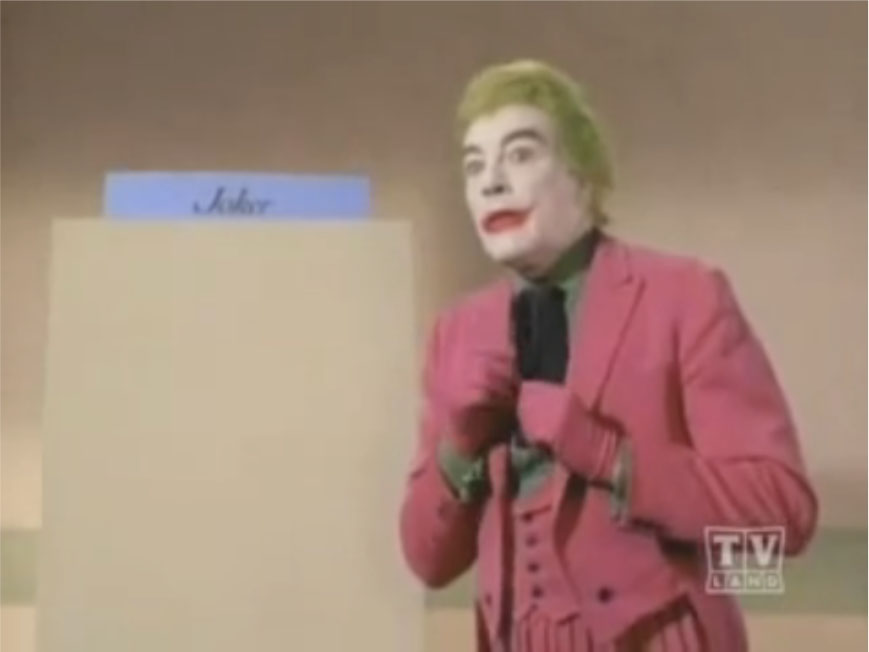 Next, the Joker enters a sort of global biennial of modernists, facing off against a Picas- soid Spaniard and an American called Jackson Potluck. Another artist uses his body as a paintbrush, Yves Klein/David Hammons-style.

“Unrestrained? Governor Stonefeller should declare this place a disaster area!”

The Joker tops them all by showing a blank canvas. His title (“Death of a Mauve Bat”) echos those of the Incoherents, the proto-dadaists who created monochrome abstractions—as jokes— and threw them away 36 years before Malevich. “Baby Jane” Towser (played by Diana Ivarson) adores the Joker’s blank canvas and applauds him as a genius.

“How can they clap for that crook?” Robin asks.

“Don’t forget, this is a hometown crowd, and the Joker’s from Gotham City” — a rather knowing comment on art world geography from the 1967 L.A. perspective.

From there the plot turns to kidnapping, assassination of Robin on a murderous mobile, and theft of the Renaissance collection of the Gotham City Art Museum. “Baby Jane” is repeatedly mystified to learn that the Joker’s pomo conceptualism is just a scam to amass Old Masters. How many Balloon Dogs did Jeff Koons have to sell to buy his Cornelis van Haarlem Hercules and Achelous? 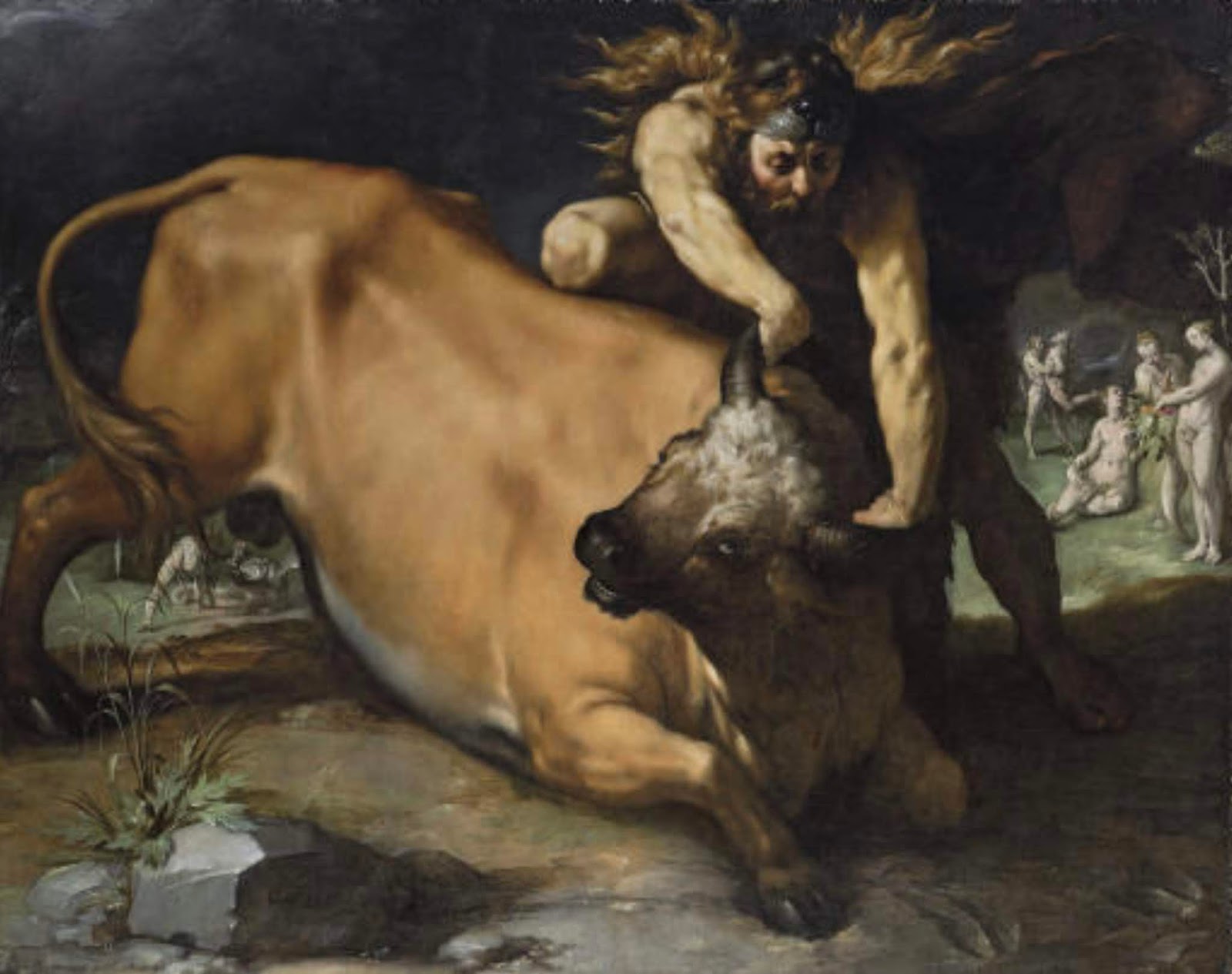 The Joker creates a process art piece on Daddy Towser’s “priceless antique table.” It’s interesting what the prop department thinks corresponds to that description. It’s also interesting that the Joker’s art looks amazingly like a Lynda Benglis pour of the 1970s. The table is smashed to bits (“Out with the old, in with the new!”) and the fragments hung in the Gotham City museum. They look, disappointingly, like little Elizabeth Murrays.

The Joker is in short the American archetype of artist as trickster-con-man-freak. He is enabled by conniving dealers (the one here switches price tags on a painting while the “mark” gazes at it) and wealthy dim-bulb collectors. The Joker’s rhetoric draws on the anarchic phase of modernism, from futurism to fluxus, and the perpetual manifesto plank that art and museums must be destroyed to make way for whatever it is that comes next. To make art, the Joker destroys art, then destroys his own creations, which he knows to be worthless. He is scrupulous about nothing beyond market value and the signing of his works. In fact, the Romero Joker resembles Salvador Dalí more than Warhol, and Dalí was pretty good at signing things. The Joker fools everyone—except, implicitly, the common folk who know nothing of art. (Shown, Ben Vautier’s Total Art March-Box, created the year before the Batman episodes.) 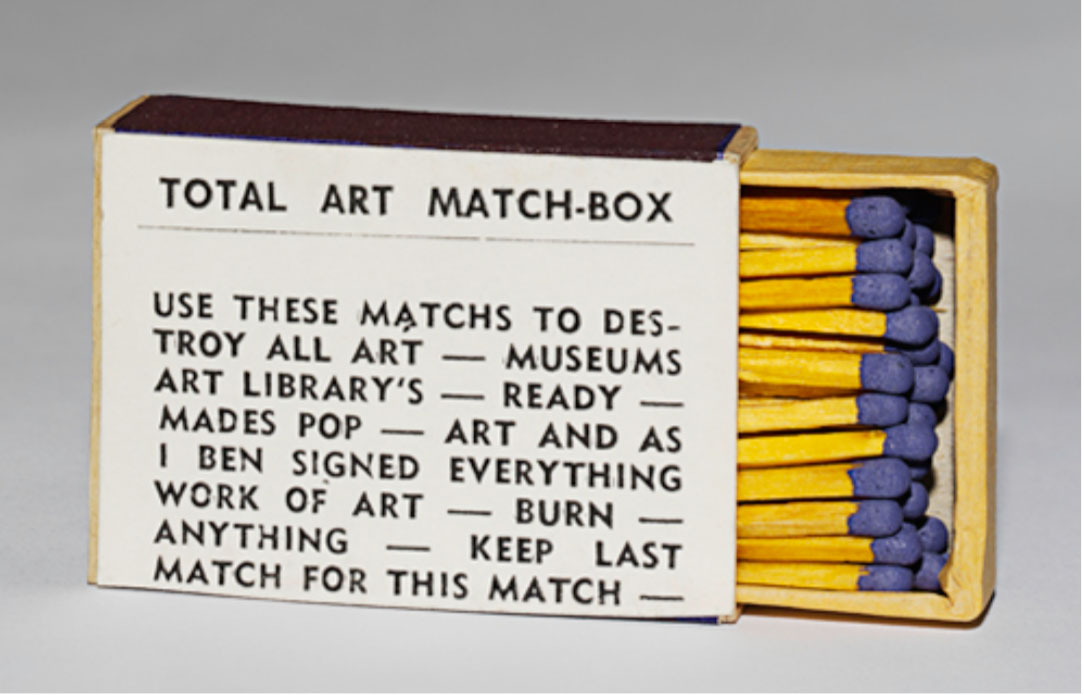 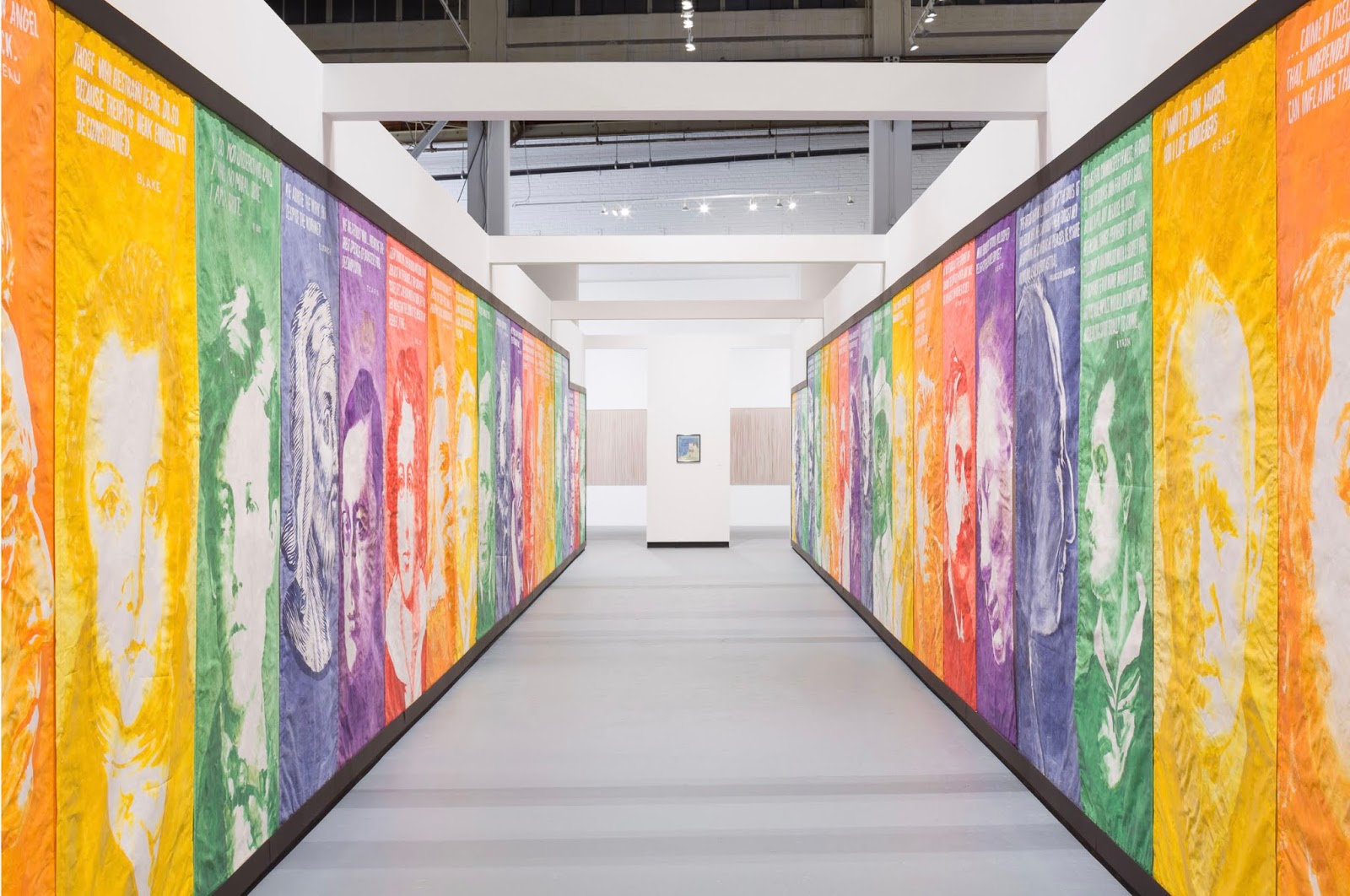 Some of Stanford Sherman’s lines mine the same vein that Mike Kelley would in his 1999 installation Pay for Your Pleasure—and for a 1960s network TV audience, yet. The Kelley piece juxtaposes an authentic psychopath’s artwork with quotations by famous thinkers on the theme of the transmoral specialness of the artiste. From Sherman’s script:

BABY JANE: “Joker, how could you!”

JOKER: “We artists should not be judged by ordinary standards. We’re a very special breed.”