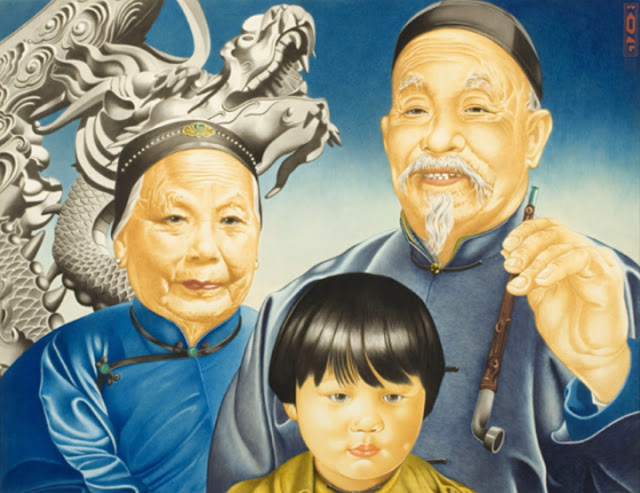 Can art museums represent America in all its E Pluribus Unum diversity? A room in LACMA’s Art of the Americas Building ought to advance that conversation. It’s a modest shoebox divided by a partition at one end. The main space has 12 representational works from the early and mid-20th century. It starts with George Bellows‘ Cliff Dwellers—the first major painting the old L.A. County Museum acquired—and runs through Marsden Hartley’s The Lost Felice. That much is typical. Less so is the fact that two of the 12 works are by African Americans, one is by an Asian, and two are by women. Compared to other museums, that counts as an impressive representation of minority (and even women) artists. The visitor who doesn’t read labels may notice that eight of the 12 objects depict Asians, blacks, or Latinos. 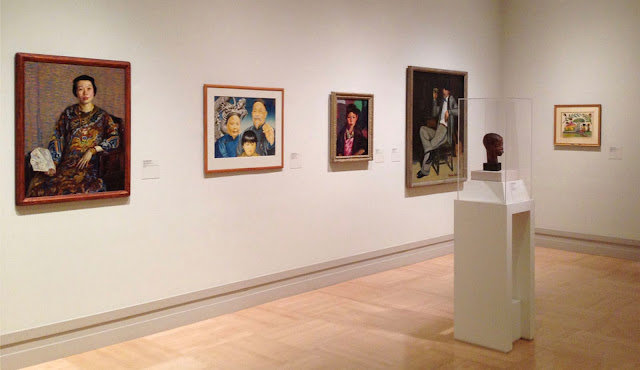 Wing Kwong Tse’s watercolor Chinese Family is an alternative American Gothic. That’s Granddad with the opium pipe. (Swears he’s going to quit...) Tse’s own family fled the Chinese revolution for Hawaii. He dropped out of USC to become an actor. The Hollywood of the 1920s offered only demeaning roles. Tse moved to San Francisco and became the Left Coast’s hippest Asian beatnik. He knew Allen Ginsberg, and his North Beach studio was above Lawrence Ferlinghetti’s City Lights Books.

Tse’s American scenesters look nothing like Grant Wood’s. Is it permissible to admire Tse’s eidetic skills as a watercolorist, or must Chinese Family be considered a DON’T in Barr’s Big Book of Modernism? LACMA bought the Tse watercolor not so long ago, in 2005, with funds by Mr. and Mrs. Thomas H. Crawford, Jr. It provokes in ways that a second-rate Hopper wouldn’t.

The installation mainstreams self-taught art with the school-taught kind. Clementine Hunter’s Camitte the Hair Fixer Is Doing Ceola’s Hair is on loan from the collection of Gordon W. Bailey. As Bailey told me, "Sans marginalizing categorization, Hunter’s magnificent painting is exhibited with other American masterworks." I’ll bet, this is the only place to see a Hunter next to a Hartley.

For still another alternative vision see the luminous view of Watts Towers by the multi-talented Gloria Stuart, at bottom of post. Like Tse, Stuart knew a thing or two about the crazy actor’s life. 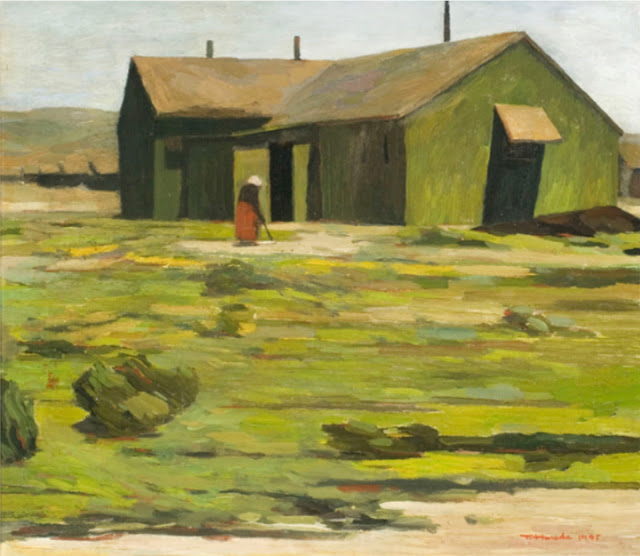 Beyond the room divider, a smaller space has six western landscapes. One is by a woman artist (Evelyn McCormick), and another by an Asian (Taneyuki Dan Harada). The latter’s Barracks—Tule Lake (1945) is an concentration camp landscape demonstrating the fat-tail influence of Cézanne for West Coast Japanese artists. There’s got to be a dissertation or two in that.

LACMA’s American collection is thin next to the long-established East Coast institutions. That makes its example all the more relevant. If LACMA can deliver diversity at a high level of quality and interest, then institutions with bigger collections can. All it takes is the will.