More Catherine Opie news: The Art Newspaper has a feature on the public artwork Opie is creating for the new federal courthouse in downtown Los Angeles. It's to be a vertical view of Yosemite Falls divided into six panels, each 11-1/2 feet wide. The panels will be installed in the atrium of the Skidmore, Owings & Merrill courthouse, to open in summer 2016.

The two lowest panels present an upside-down view of the waterfall—they consist entirely of a reflection. This recalls Carleton Watkins' views of Mirror Lake (1861 example below), in which the virtual image appears more substantial than the real one. The partly upside-down image of an icon of American freedom will parallel the concerns of many who will walk through the courthouse atrium. Said Opie: "The notion of fracturing a photograph suggests the fracturing of life." 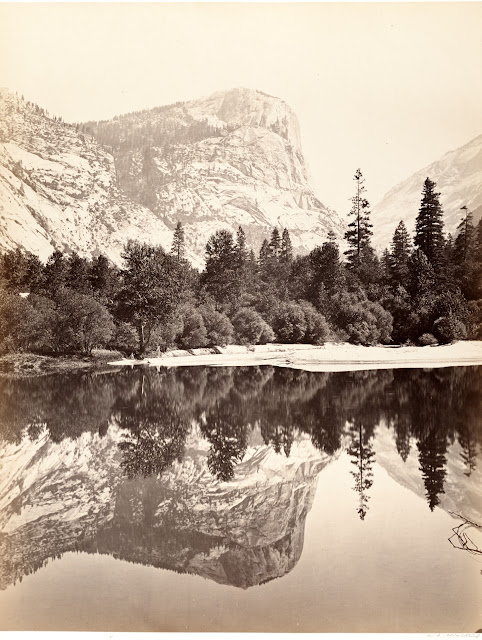 cherryalignment said…
Hi I love your blog – so cool and informative. If you’d like to check out ours, you can also read about the Christophe Charbonnel bronze sculptures we carry in our Sunset Plaza showroom in West Hollywood. Thanks! http://www.laperfectionlouis.com/blogs/news/133062151-the-art-of-anonymity-and-the-perfect-weekend-getaway
March 12, 2016 at 12:47 PM

cherryalignment said…
Hi I love your blog – so cool and informative and these pictures are stunning. If you’d like to check out ours, you can also read about the beautiful neoclassical Christophe Charbonnel bronze sculptures we carry at our Sunset Plaza showroom in West Hollywood. Thanks!