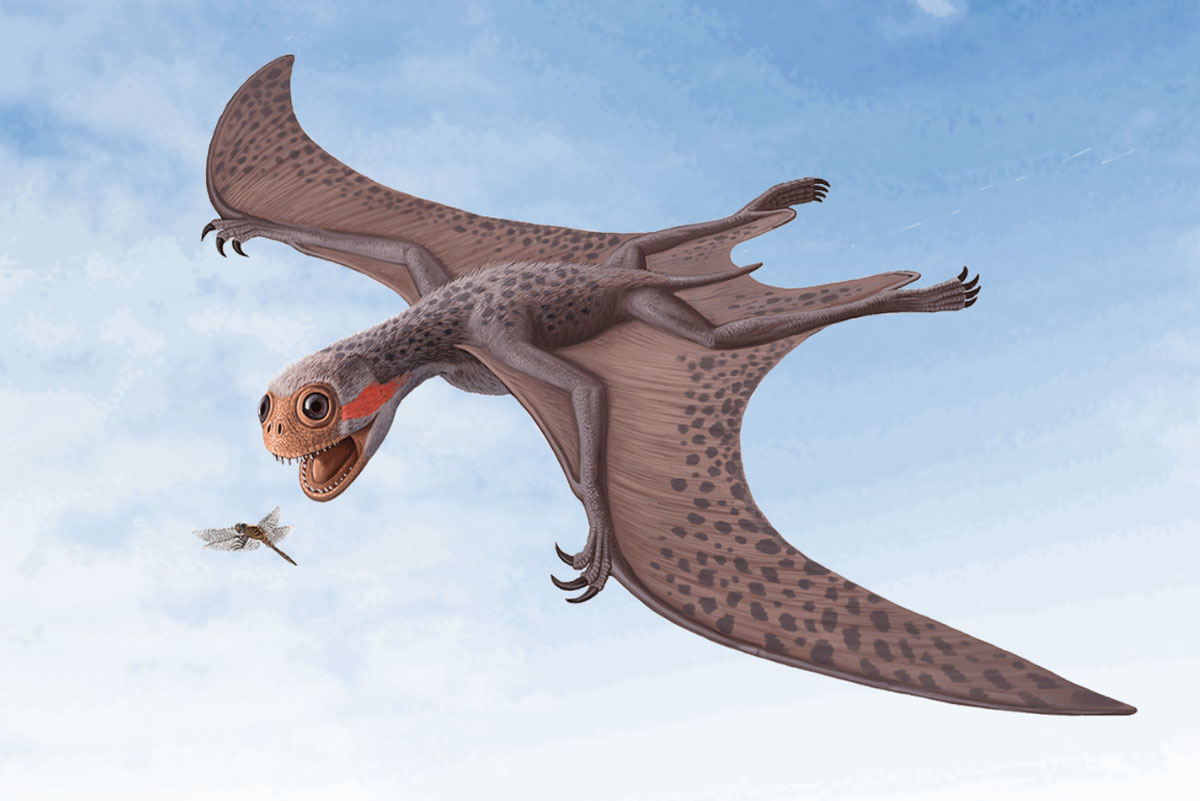 Art history and natural history have a nodding acquaintance in the quarries of Sohnhofen, Germany. The region's fine-grained limestone became the basis for Alois Senefelder's invention of lithography in 1796. But well before that, the Sohnhofen limestone was known for "pictures." Workers splitting rock for paving stones sometimes found they cleaved into mirror-image, superflat fossils of ancient life. 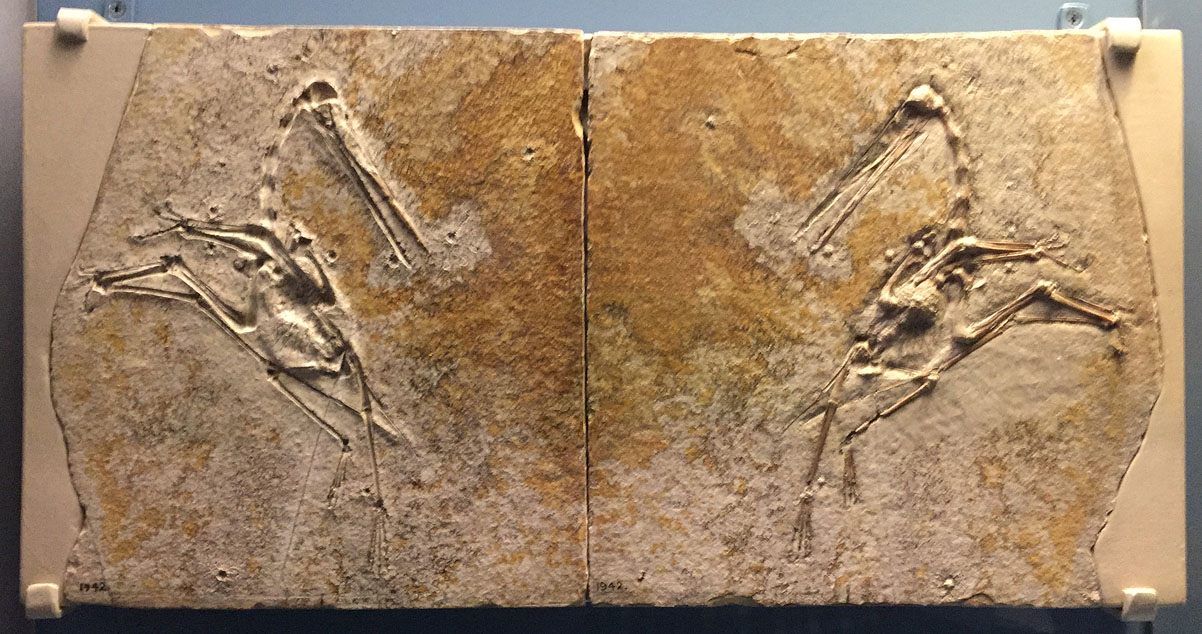 In 1784 Cosimo Allesandro Collini, an Italian naturalist hired to curate a German count's wunderkammer, came across a fossil of a flying Jurassic reptile, later christened Pterodactylus antiquus. Collini went on to catalog 29 species of flying pterosaurs, as they're called generically. The diverse group spanned the globe, ranging in size from that of a paper airplane to a fighter jet. (At top of post is a conception of the 3-foot wingspan Jeholopterus, from China.)

"Pterosaurs: Flight in the Age of the Dinosaurs," a traveling show now at the Natural History Museum of Los Angeles County, is kid-friendly, naturally. The best digital gimmick is a motion capture set-up that lets kids (or bizarrely unself-conscious adults) flap their arms to direct an on-screen pterosaur through a virtual landscape. There's also a lot of science, engagingly presented and some of it quite new.

It is a challenge to reconstruct a living 3D creature from a limestone fossil pressed to prosciutto thinness. One controversy is how pterosaurs got about on land. Did they crawl like bats, hop like sparrows, or waddle like turkeys? Recent discoveries of pterosaur tracks seem to cinch the argument that pterosaurs walked on all fours at decent speed. When not in use the wings folded cleverly, like an umbrella. 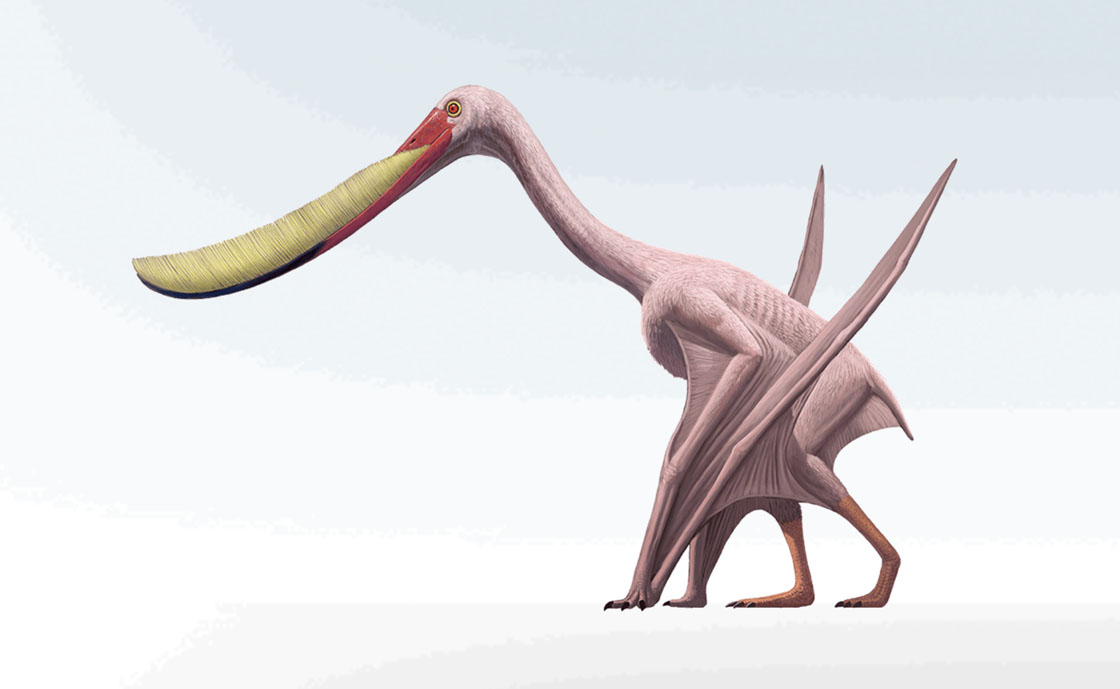 "What color were dinosaurs (pterosaurs)?" No one knows. But illustrations, 3D models, and videos—this show brims with  them—require artistic choices. It was once the fashion to render extinct species in Dutch monochrome. Illustrators have since moved to a trippy, candy-color postmodernism. Pterodaustro is here shown in shocking pink nakedness, inviting comparisons to a flamingo or a Guillermo del Toro nightmare. One rationale is that Pterodaustro's lakeshore Argentinian habitat was comparable to that of today's flamingoes. But we don't really know it was pink.

Every dinosaur nerd knows that the biggest pterosaur of all time is the 33-foot-wide Quetzalcoatlus, named for serpent-god Quetzalcoatl (who rated a LACMA show in 2012).

That record is now open to dispute. NHMLA is displaying a cast of a newly-discovered fossil bone that seems to be from a more massive pterosaur yet. It's from Transylvania. 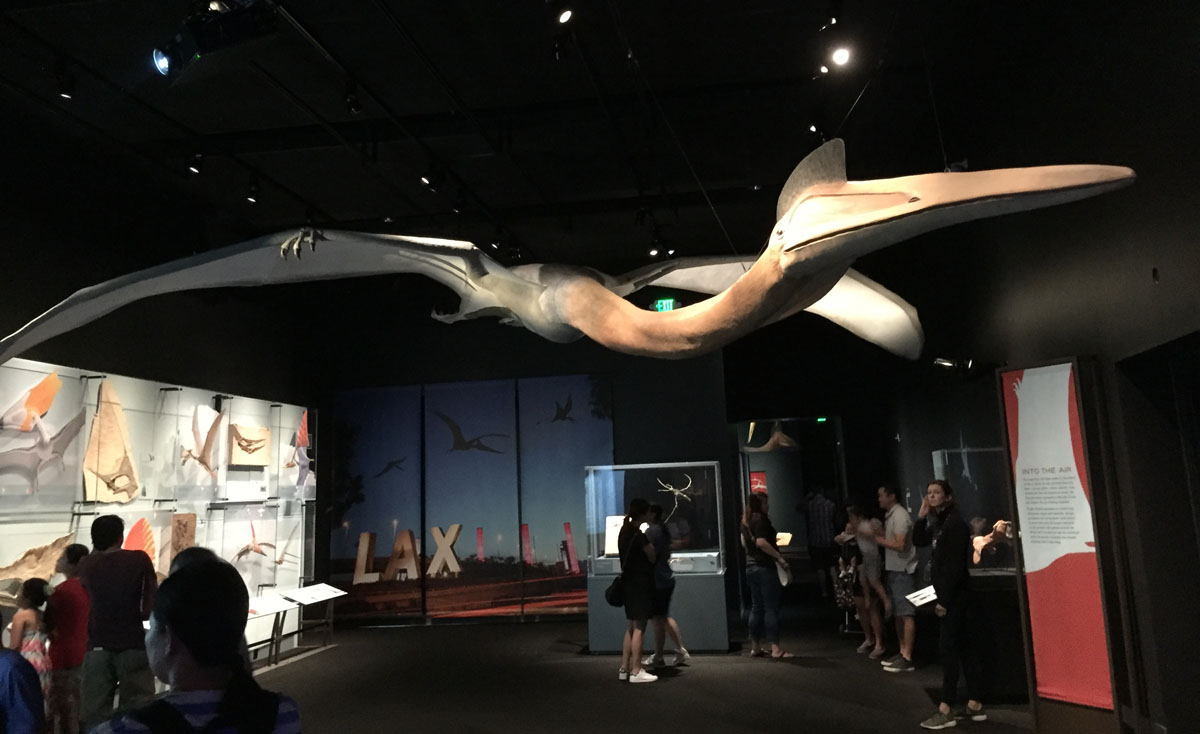