Missing Impressionists Turn Up in Florida 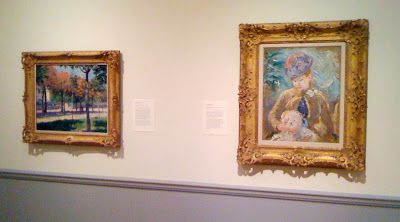 The Norton Museum of Art, West Palm Beach, Florida, is showing a Caillebotte and a Morisot on loan from the Armand Hammer Foundation. If they look familiar, it's because they used to be part of the permanent collection of the Hammer Museum in Westwood.
In 2007 the Hammer Museum returned 92 works, valued at $55 million, to the Hammer Foundation, in return for being excused from some of the more narcissistic provisions of Armand Hammer's gift. Among them was a poison pill clause saying that the entire collection had to be displayed, or else everything would revert to the Foundation. That was a problem, given how mortifyingly bad the lesser half of the collection was. John Walsh helped negotiate the revised deal and assured the press that all the best works remained with the museum. “The issue was what were really museum-worthy paintings and which shouldn’t have been in the Hammer in the first place,” Walsh told The New York Times. Nevertheless, the museum and foundation have been mum on just what was returned and where it went. The reported $55 million value of the returned works implies that they can't all be utter dross. (The 50 worst paintings Hammer bought probably aren't worth $1 million put together.) The Caillebotte Square in Argenteuil and Morisot Young Girl With a Dog are typical works of second-string impressionists not well represented in Los Angeles and—in the Norton's opinion, anyway—are worthy of space on museum walls. "Teflon Tycoon" Armand Hammer had a history with the Florida museum, which managed to fluff his dicey collection into South Florida's first blockbuster, in 1981.
Email Post
Labels: Armand Hammer Hammer Museum John Walsh Norton Museum of Art

Anonymous said…
This comment has been removed by a blog administrator.
December 28, 2009 at 3:26 AM