The Man Who Invented Postmodernism 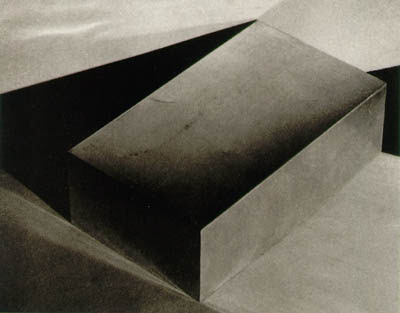 The Getty's Paul Outerbridge show makes an unintentional(?) case for its subject as the man who invented everything postmodern, and did it in black-and-white prints no more than 5 inches high.
Consider:
1. The one truly famous B&W Outerbridge is the Ide shirt collar that Outerbridge shot for a magazine ad. Duchamp saw the ad and clipped it as a prototypic specimen of the photographic ready-made.
2. Outerbridge anticipated pop art. There’s a product shot of a box of something called H-O. The gallery label notes that it anticipates by a few years Stuart Davis’ painting of Odol — itself hailed as a precursor of pop.
3. Outerbridge invented photos of small fake things that look like big real things. (Pictured, Saltine Box, which also happens to be the definitive cubist photograph.)
4. OK, Outerbridge didn’t invent staged photos. He did pioneer staged photos that are supposed to look staged. Outerbridge spent his later years in Laguna Beach, home of the Pageant of the Masters. The Getty show has Outerbridge’s B&W documentation of one Masters tableaux, a simulacrum of Rubens’ The Flight of Lot and His Family from Sodom. It’s creepy, it's kooky, and mainly, it's a potent reminder that all staged photos aspire to the condition of the Laguna Pageant.
5. Outerbridge invented hot black guys in photography. His Ethiopian Form is no F. Holland Day dress-up but a buck-naked sleeper hotter than anything Mapplethorpe did. (Of course, Outerbridge's tastes were really for the white ladies. He also invented S&M fetish pics presented as high art — though the breakthrough came in Carbro color and largish format.)
6. Outerbridge influenced Cal Arts. Jo Ann Callis, whose Getty show runs concurrently, saw Outerbridge’s slightly-off-color prints early in her career and cites them as a formative influence. Callis taught a whole raft of Cal-Art notables.
7. Outerbridge helped inspire the New Topographics. You won’t find that argued in the Getty show, but the claim has been made elsewhere. Late in life, Outerbridge befriended William Current, a precursor of N.T. and mentor to Lewis Baltz.
Email Post
Labels: Getty Museum Jo Ann Callis Lewis Baltz Pageant of the Masters Paul Outerbridge postmodernism William Current

Donald Frazell said…
This bozo was boring when I became interested in photography in the 70s, and continues to be as shallow and simplistic as the box you show. He was no artist. He was a commercial photographer, and so interested in design. Designs that the young and of similar thought patterns could grasp, not too complex, emotionless, irrelevant to the world at large. Easily digestable, if completely lacking in nutrition.

This is how art beame useless, meaningless, purposeless. All so the Academys had product to sell to the masses of wannabe artistes. Easily attainable goals by mediocre talents. And so we have Contempt Art. Thanks, the world is a much more boring place because of it. So much for passion and meaning in life. Yeeech.