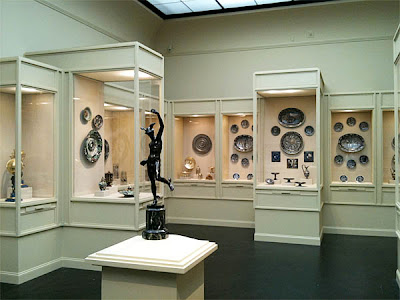 LACMA continues to roll out new spaces for older European art. The latest, now half-accessible while being installed, is an airy update of the Renaissance "collector's cabinet" room (above) that was one of the high points of the former installation. It's flanked by the two big Dutch mannerist potboilers, the Hendrick Goltzius Jupiter and Danaë and the Joachim Wtewael Lot and His Daughters.
Nearby is what the museum is billing as the nation's largest gallery space for Italian baroque art. It pairs paintings of the 1600s with archeological Roman statues from a millenium and a half earlier. Curator J. Patrice Marandel compares this to the way art was displayed in period Roman palaces or English country homes. 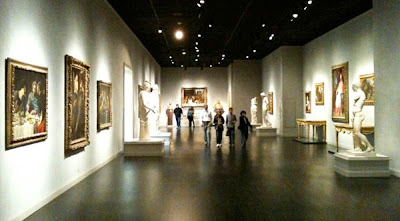 Though the room is humongous, it's not likely to be anyone's favorite place. Like a New York railroad flat, it's unclassically long, oddly shaped, and kind of dark. It lacks the laylights that make the Dutch rooms glow. The art itself is well-lighted. What's audacious about committing so much space to the Italian Baroque is that the museum's collection omits the biggest names. LACMA has neither Caravaggio nor Bernini, and isn't likely to get them. It does have a carefully assembled set of Caravaggesque paintings and, better yet, great works by Domenchino, Pietro da Cortona, and Guido Reni. You may still be wondering how the museum found enough Italian baroque paintings to fill the nation's largest gallery. The answer is, they include Northerners working in Italy. So the room has Michael Sweerts' Plague in an Ancient City and Gerrit van Honthorst's The Mocking of Christ, among many lesser pieces.
The classical sculptures, from William Randolph Hearst's collection, help finesse the absence of any monumental baroque statuary. They look okay here (though it makes you wonder what future installations of Greco-Roman art will look like without the statues). 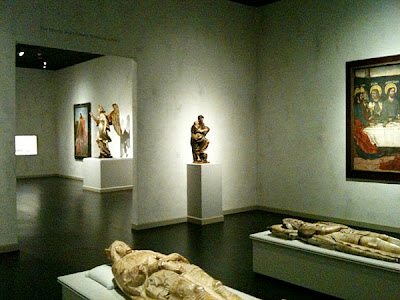 An even more remarkable lesson in making do with not so much is to be found in the two new rooms of Spanish art, covering the Gothic, Renaissance, and baroque periods. LACMA isn't known for having much Spanish art at all. Yet the rooms aren't bad, assuming a tolerance for funky wall treatments. Here too, there's a bit of cleverly creative geography. Naples was part of Spain from 1557 to 1714, so this justifies including Neopolitan paintings as well as your mother's favorite LACMA object, the c. 1600 Archangel Raphael from Naples.
Two of the biggest names here are painter Pedro Berrugete and his son, the greatest sculptor of 16th-century spain, Alonso Berrugete. LACMA gambled by buying major works attributed (with some doubt) to each. The two pieces are now displayed together for the first time. The large painting of the Last Supper is now credited to "Pedro Berrugete and Workshop." Some had supposed it to be a mere workshop copy. The figure of Saint Mark, formerly "attributed to Alonso Berrugete," is now given to Alonso outright. 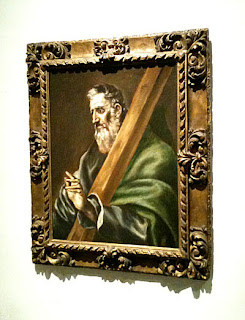 Speaking of attributions, the museum's peripatetic El Greco Saint Andrew is on view. When a big museum's one-and-only El Greco isn't shown for years, it's safe to assume there's something wrong with it. The Saint Andrew is now identified as a product of the "School of El Greco." Translation: "Whoever made this knew of El Greco and wanted to paint like him."
This suggests that Marandel is having a hard time filling some of the wall space. Next to the downgraded El Greco is the creepy, kooky still life by Alonso de Escobar that didn't sell in this January's auction of unloved works. Like a bad penny, it's back. If you like it and can pay cash ($80,000 low estimate), the museum might be ready to deal.
Email Post
Labels: Alonso Berrugete Alonso de Escobar J. Patrice Marandel LACMA Pedro Berrugete