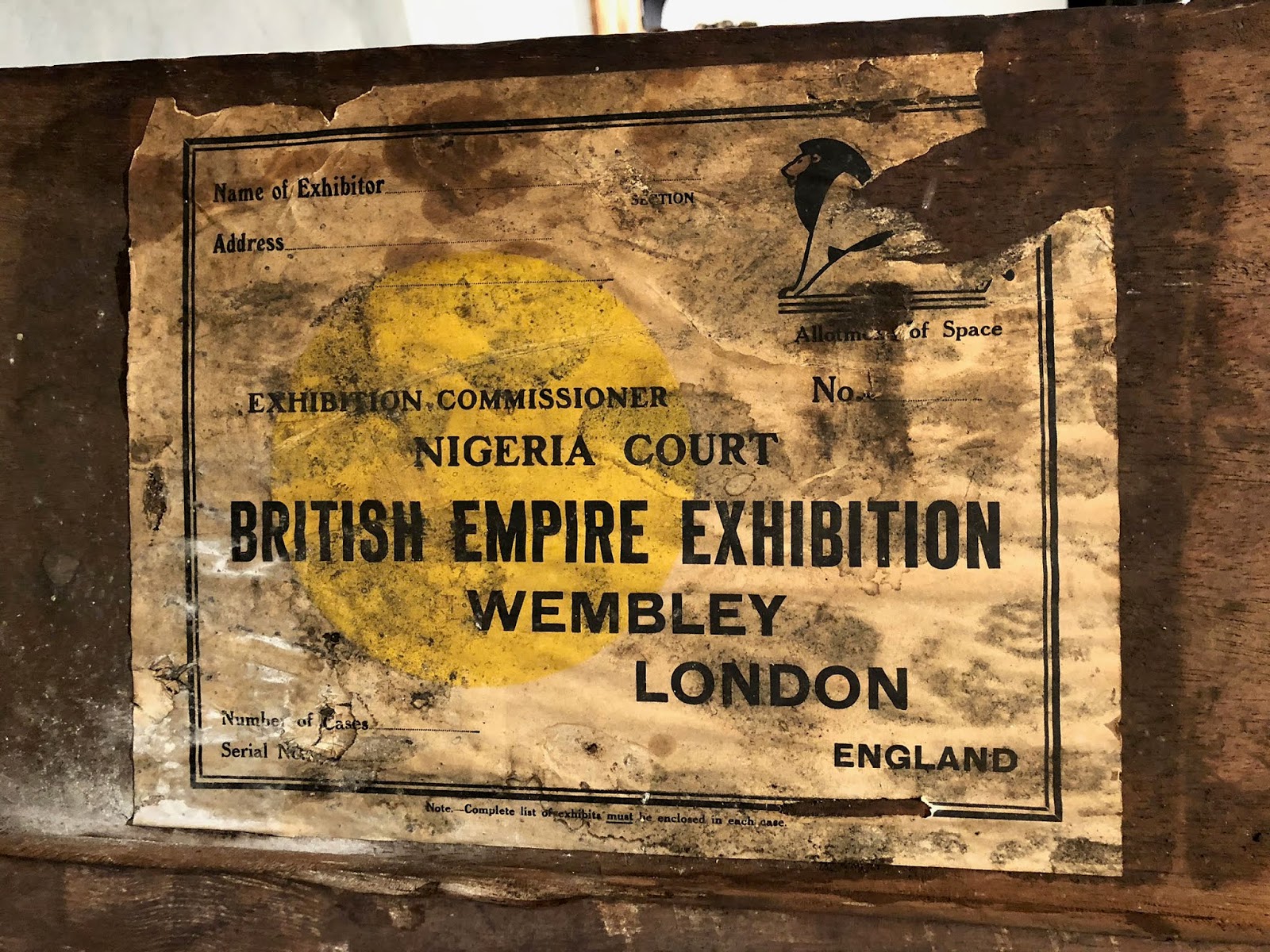 The UCLA Fowler Museum has two original, very different shows on the theme of colonialism. The smaller, more historically framed one is "On Display in the Walled City: Nigeria at the British Empire Exhibition, 1924-1925." Britain celebrated its global empire by installing West African artists in a Twilight Zone zoo in the London suburb of Wembley. Wood carvers from Nigeria, Ghana, and Sierra Leone became celebrities, besieged by journalists. A door to their compound contained a handwritten notice, STRICTLY PRIVATE NO ADMITTANCE. That worked both ways. The Africans were not permitted to leave their quarters without an escort. A Union of Students of African Descent objected to the exhibition's demeaning presentation, to little avail. 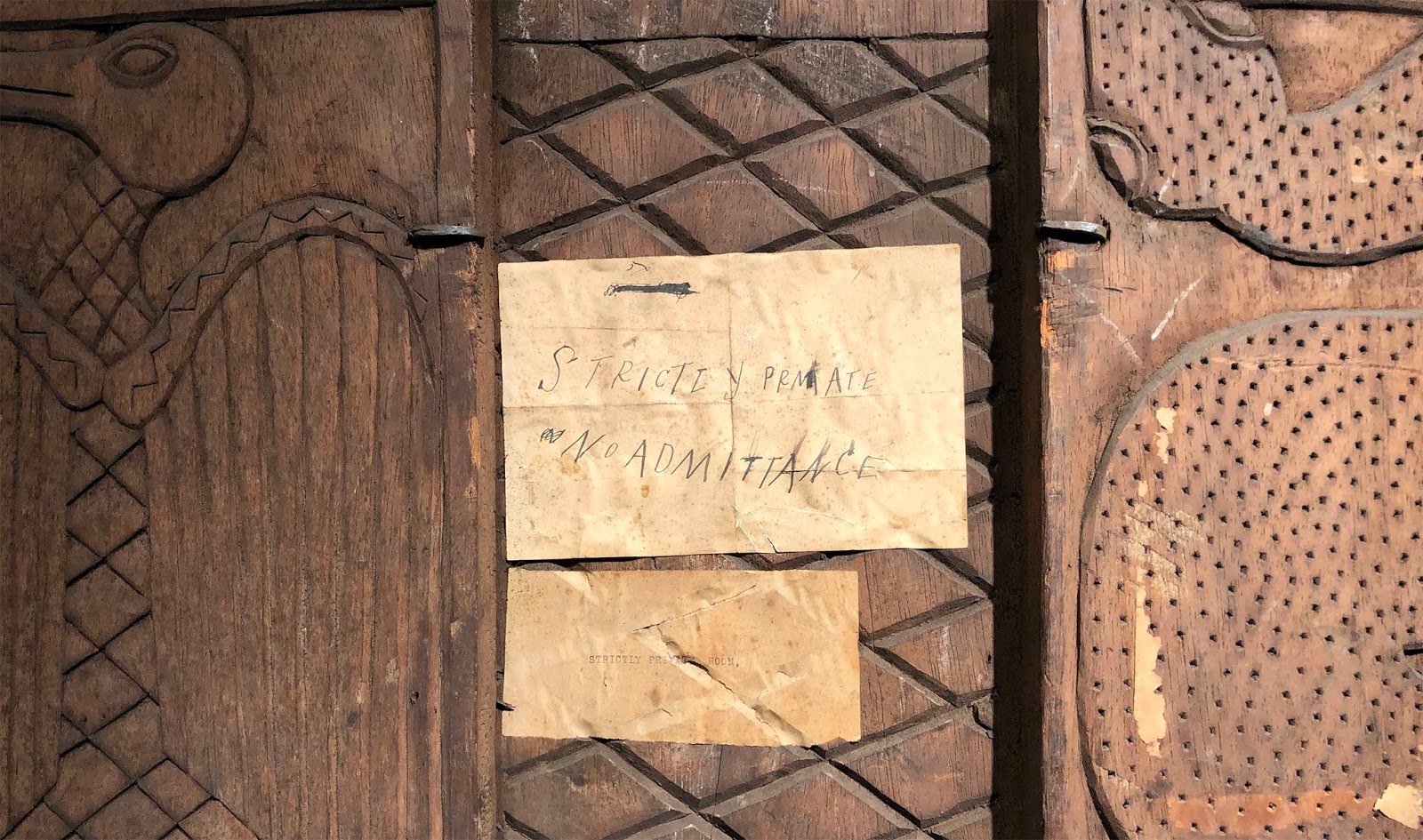 The exhibition's elegantly carved doors and signs were acquired by big-pharma tycoon Sir Henry Wellcome. They came to UCLA, along with much of Wellcome's collection, in the 1960s.
Even more surprising is a painted wood replica of the royal altar of Benin's Oba Ovonramwen. Britain looted the Oba's ancestral treasures in the Benin Punitive Expedition of 1897. They went to the British Museum and the art market, entering collections around the globe and inspiring restitution demands, Sarr-Savoy, and Black Panther.

Meanwhile the Oba's oldest son, Prince Aiguobasinmwin, succeeded his father and commissioned a replacement of the ancestral altar in 1921. More bad luck: The replacement burned in 1923, and a replacement of the replacement was stolen in 1927.
However a carved replica of the first replacement altar was made for the British Empire Exhibition. Painted wood represents the bronze and ivory of the original. Wellcome bought the wood altar, and it's now part of the Fowler collection and show. 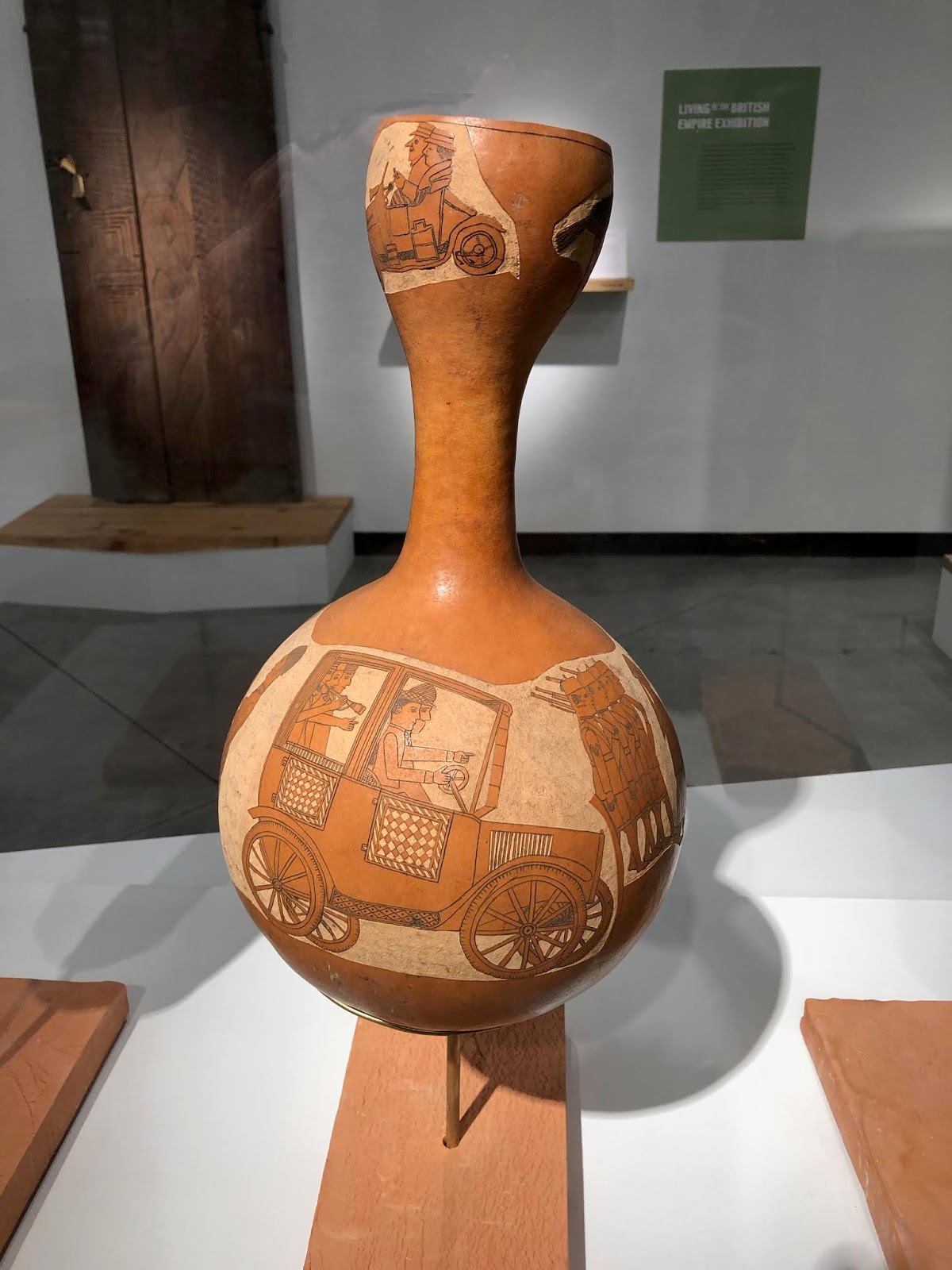 Among the exhibition's most artistically compelling works are painted gourds, probably by Audu Mai Alijeta, who was evidently among those under house arrest in Wembley. Using a uniquely African medium, the artist shows late-model British automobiles in a style evoking archaic Greek vase painting. Despite that, it's reported that the gourds were not big sellers (the Wembly fair was a selling exhibition).

The Fowler is also presenting a mid-career retrospective, "Rina Banerjee: Make Me a Summary of the World." India-born Banerjee moved to London, then the U.S., as a child. She took an engineering degree at Case Western and worked in the plastics industry a few years before going back to college for a Yale MFA. Her work explores the long shadow of colonialism and invites comparison to her Pattern & Decoration predecessors. Banerjee mixes up the strangeness of the natural and not-so-natural world, orchestrating gourds, lampshades, cowries, dolls, horns, feathers, masks, faux eyelashes, and porcupine needles.