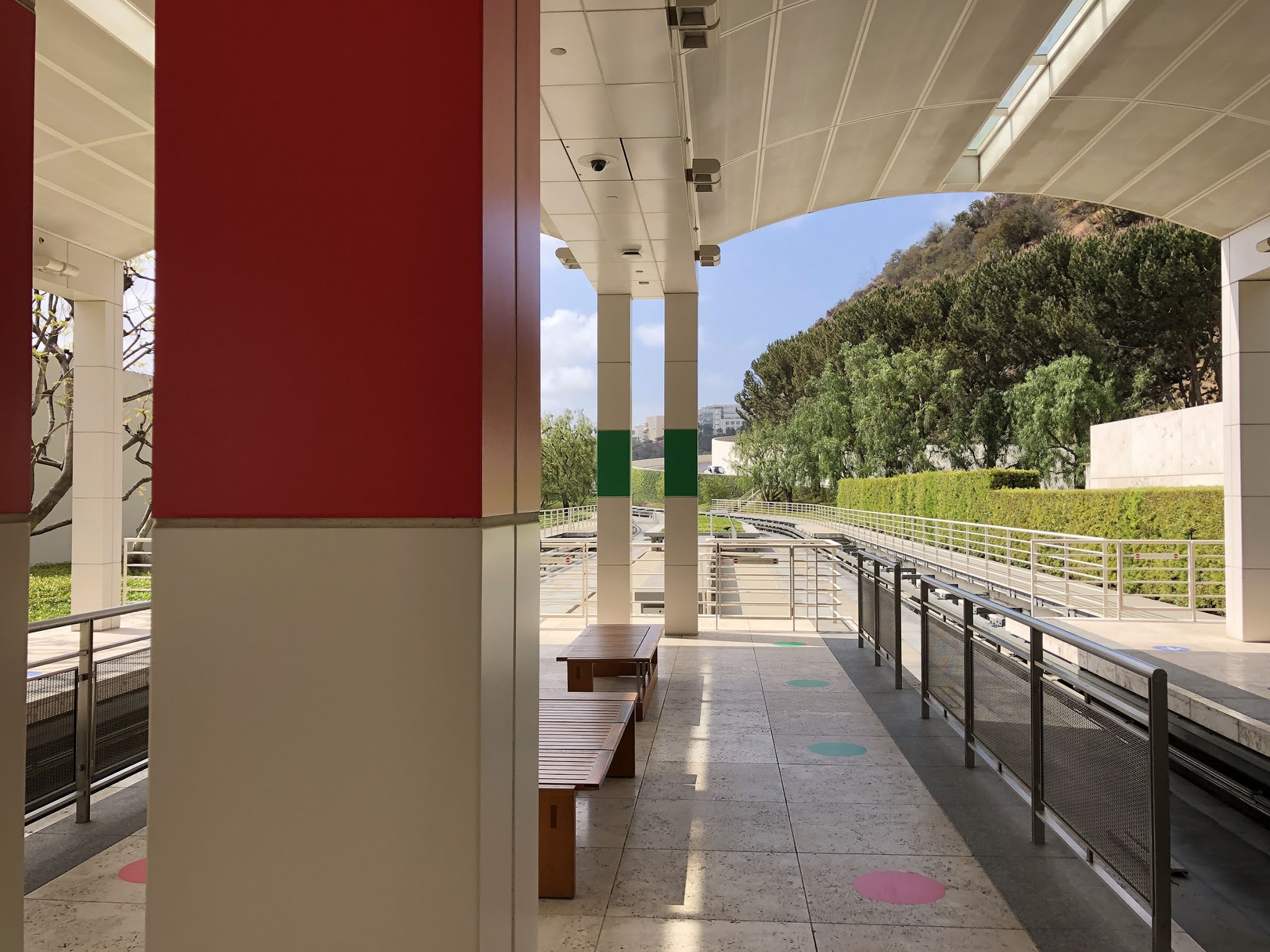 I'd guess that primary color-averse Richard Meier didn't sign off on the new color coding of the Getty tram station. In any case the Getty Center is ready to welcome post-lockdown visitors starting May 25th. It's a phased reopening, initially limited to the museum's plaza level and the West Pavilion's 19th-century paintings galleries. Unlike the Getty Villa, which opened with two high-profile loan exhibitions, the Brentwood campus is beginning more modestly with small shows of manuscripts, drawings, decorative arts, and photography. 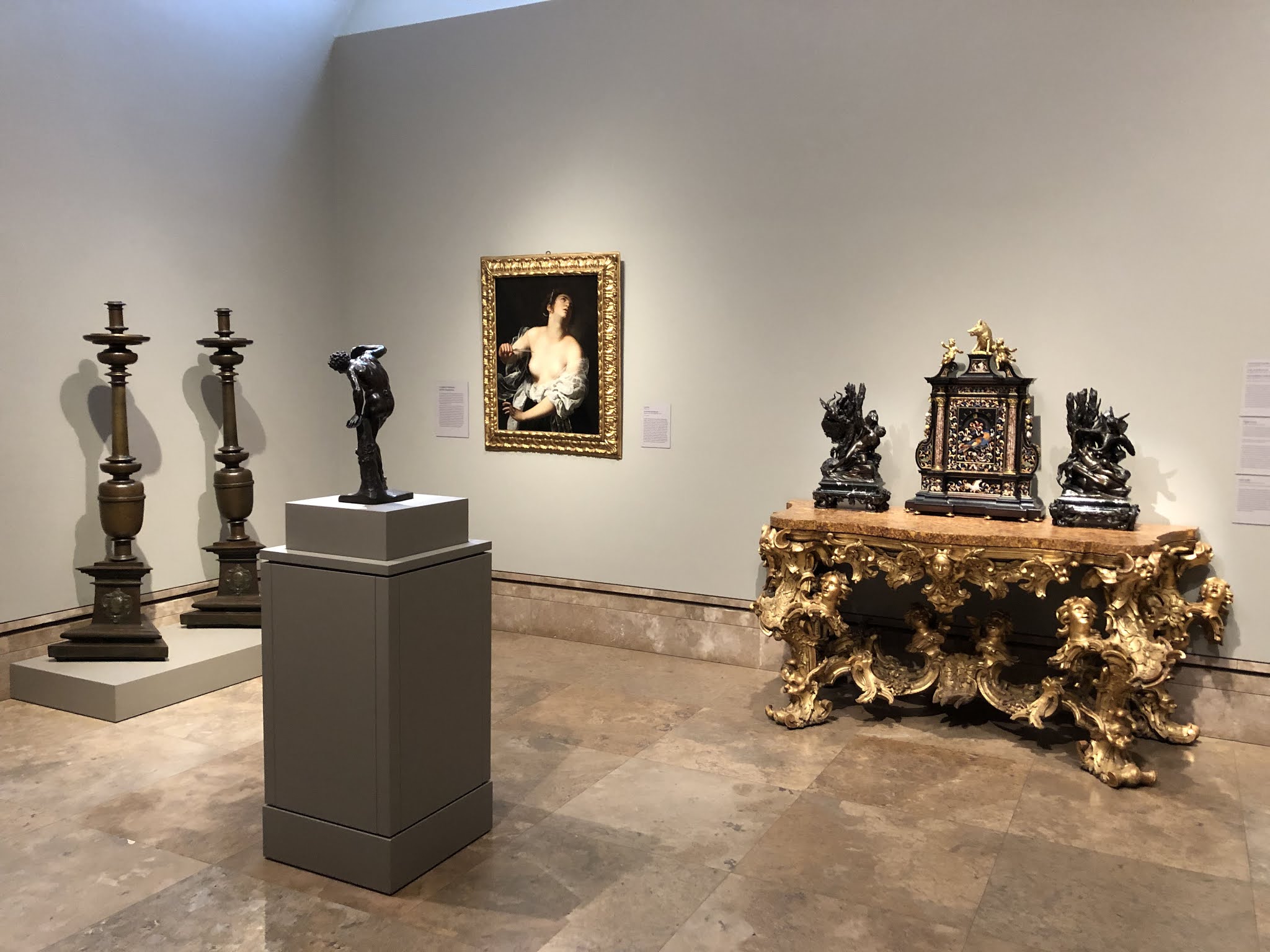 For many the big draw will be the newly acquired Artemisia Gentileschi painting, Lucretia. The top-floor rooms of 17th-century painting are still closed, so it's debuting in a gallery of baroque decorative arts and sculpture.

Gentileschi was to some extent typecast, then and now, for her portrayals of strong women. Collectors wanted repetitions of popular subjects like Lucretia, but the artist avoided mere copies. As she wrote Sicilian patron Don Antonio Ruffo, "never has anyone found in my pictures any repetition of invention, not even of one hand."

Lucretia was a semi-legendary Roman heroine who killed herself after being raped. Artemisia did at least four versions of the subject, each completely different. One is a multi-figure history painting of the assault, now in Potsdam. Two other Lucretias are single full-figure depictions of the suicide. Pared down to the essentials, the Getty painting is the smallest but most cinematic. ("All you need to make a movie is a girl and a gun," said the not-so-feminist Jean-Luc Godard.)

There's a women's history spin to another work on view, a newly added manuscript of Ovid's Heroides made for Anne of Brittany. It's a graphic novel of sorts, illustrating wronged women's denunciations of dastard husbands and boytoys. Anne, an important patron of the arts, is famous for her many portrayals in manuscripts, sculptures, and medals. One miniature in the Getty manuscript is conceivably the earliest surviving portrait. She would have been about 16, though already Queen of France (she married Charles VIII in 1491).

"Power, Justice, and Tyranny in the Middle Ages" (through Aug. 15) has Anne's manuscript open to a full-page miniature of Ariadne, lover of Theseus of labyrinth fame. The bottom panel has Theseus slaying a Muppet minotaur. This opening was shown at the Morgan Library in 2001. Otherwise the manuscript's eight full-page miniatures have apparently never been on public view since their creation 528 years ago.

The illuminator was the anonymous Master of the Chronique scandaleuse, named for pictures in a tell-all history in the Bibliothèque Nationale, Paris. The Getty has another book partly by the artist, the Hours of Denise Poncher. The latter includes the Scandalous Master's macabre (but amusing) Denise Poncher Before a Vision of Death.

Last summer's BLM protests had museums, including the Getty, vowing to show more artists of color. If you're wondering how that's coming, try "Photo Flux: Unshuttering L.A" (through Oct. 10). Guest curated by jill moniz, formerly of the California African American Museum, it's a salon-style installation of work by 35 L.A.-based or connected artists working in antiracist themes. Many of the artists are not necessarily thought of as photographers (among them Cauleen Smith, who has a show at LACMA). Getty collection works by Laura Aguilar, April Banks, Paul Mpagi Sepuya, and Carrie Mae Weems join numerous loans.

Timed Getty Center reservations are available now. They're going fast and are already sold out for Memorial Day weekend.

Anonymous said…
The gallery where the Gentileschi work is displayed is why I respect the period rooms of, for example, a Metropolitan Museum. Otherwise, when decorative objects, including furniture, are displayed randomly, they always make me think of items for sale in a home furnishings store.

Since LA no longer has an institution of the visual arts that attempts to be at least somewhat encyclopedic, the place in Brentwood will have to do.
May 25, 2021 at 3:12 PM

Anonymous said…
^^^The place in Brentwood is probably good enough for you...

Yale is definitely NOT the place for you.
Here is Yale's "home furnishings" store:
https://www.youtube.com/watch?v=VxwspsUKPXg
May 26, 2021 at 7:14 PM

Anonymous said…
^ Yea, that's more of a warehouse or, as the place is designated, a study center.

The main thing that place illustrates is, whoa, there sure has been a lot of stuff created through the centuries. Also lots of talent, productivity and technical-artistic skill in the human species.