Poussin & Dance at the Getty

The Getty Center's "Poussin and the Dance" explores the wild side of Nicolas Poussin, otherwise pegged as a cool, calm classicist. In the 1630s Poussin found a ready market for sensual, alcohol-soaked interpretations of ancient festivities. The show brings together about a dozen paintings and related drawings and is capped by a trio of commissioned dance performances by contemporary L.A. choreographers. 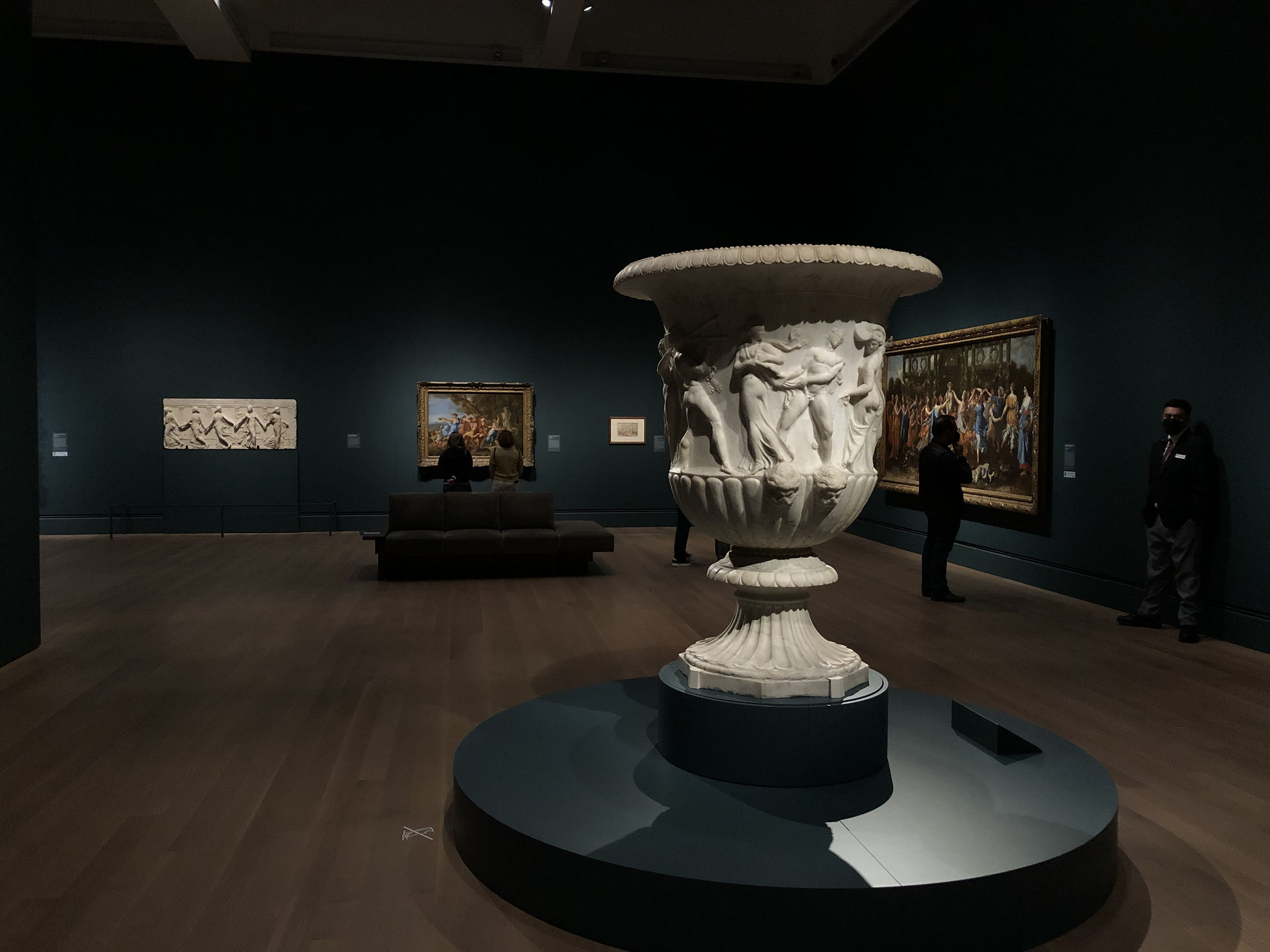 Poussin's antique dance pictures, a sensation in 17th-century Rome, were popular with later British collectors. The UK National Gallery, which co-organized the show with the Getty, has lent four. When the exhibition debuted in London last fall, it included the best-known Poussin dance picture of all, Dance to the Music of Time, owned by the Wallace Collection. That didn't make it to the Getty, but several of the best works here rival it. One is from Kansas City's great, though perpetually underrated, Nelson-Atkins Museum. Another off-the-cultural-tourism track rarity is a 12-foot-wide painting (Poussin's largest, by far, of this kind) from Sao Paulo, Brazil. It bears the title Hymenaeus Disguised as a Woman during an Offering to Priapus.

"Poussin and the Dance" follows on the heels of the recently closed "Rubens: Picturing Antiquity" in Malibu. It too brings together a 17th-century painter's works with antiquities that inspired them. In this case, the antiquities loans are just two, the 1st-century BC Borghese Vase and the 2nd-century AD Roman Borghese Dancers, both lent by the Louvre. Poussin sketched them when they were in Roman collections and adapted specific poses for his dance paintings.

Some of Poussin's drawings show faceless, Mark Kostabi-esque figures. This was part of an unusual process in which the artist set out clothed wax dolls in a toy "theater" to visualize his multi-figure compositions. The show recreates a wax-figure model for The Abduction of the Sabine Women, shown alongside the version at the Metropolitan Museum. The Louvre version, not lent, is represented by young Edgar Degas' copy (lent by the Norton Simon Museum).

The exercise of making the Old Masters relevant with contemporary performance comes with cringe potential. This show's presentation of commissioned dance pieces hits several right notes that other museums would do well to follow. The dance videos (choreographed by Ana María Alvarez, Chris Emile, and Micaela Taylor) are in a separate room, and the audio does not bleed through (much) to the paintings and drawings rooms. This lets the videos augment rather than compete with Poussin for attention.

Speaking of that, it's a cruel fact of museology that visitor attention spans are short (~15 seconds per displayed object). Yet museums often show half a dozen videos in serial rotation on a single screen in a dark room. The result is that visitors duck in to see part of one video, and then leave. Here each dance video is a trim one minute long, encouraging visitors to watch all three clips. Each video occupies a separate screen, and two freeze on a still as the third plays.

Video of the full dance performances, about 15 minutes each, can be accessed in the galleries via QR codes or anytime on the Getty website or YouTube.

Anonymous said…
"...it's a cruel fact of museology that visitor attention spans are
short (~15 seconds per displayed object)."


A selfie-type culture in general seems to be the backdrop where serious scholarship in the arts is both increasingly self-effacing and increasingly political. Or a case of "Why bother? Who cares? You're not hip and au courant enough!"
February 21, 2022 at 12:59 PM

Ted Gallagher NYC said…
The raft of awesome shows recently at the Getty makes me sour when I think about the brain trust at the Met, whose latest output is the milquetoast show on the influence of 18th C. French decorative arts on _DISNEY_ !
Angelinos get the titans Poussin and Rubens, and we in New York get tripe!
I'm so angry I could spit.
*
Pity my favorite Poussin didn't make the cut: his so-called "Birth of Venus," c. 1635, from the Philadelphia Museum of Art. It doesn't feature a dance, strictly speaking, but for that matter neither does the "Massacre of the Innocents" from the Met, which is featured in the LA show.
Instead, the Philadelphia canvas [ https://philamuseum.org/collection/object/102996 ] shows a highly kinetic marine procession, beautiful in every detail.
The painting was monetized by the Soviets in 1930, ex coll. Catherine the Great, but has been a vaunted treasure of PMA's since 1932.
February 22, 2022 at 9:09 AM

Ted Gallagher NYC said…
Re your aside, that is, "One [sc. Poussin canvas] is from Kansas City's great, though perpetually underrated, Nelson-Atkins Museum":
Anyone who's visited Nelson-Atkins would never plausibly underrate the world-class collection there.
February 22, 2022 at 10:05 AM

Anonymous said…
This show should be titled "Poussin for Dummies".

The objective of this show is to make Poussin user-friendly, hence the emphasis on the dance motif.

As to the Met, their latest show is hardly "milquetoast".

If you want to see how to deal with a difficult painter without dumbing it down, see the Met's show on David.

By showing how David used art to do politics, the Met predisposes the viewer to read his work as allegories of his time.

I also like how with the premise (art as politics) the Met takes a shot at the art for art's sake crowd.

Ted Gallagher NYC said…
Have not seen the David drawings show yet. Busy with the stellar offerings at Neue Galerie's show, to close soon. Unmissable.
*
Come on, Met. Get serious.
With your lender network and resources, how about a survey of the Utrecht School?
Or, ducento and trecento panels under the banner of "The Cradle of the Renaissance: Early Paintings from Byzantium, Lucca and Pisa?
*
Enough with the paleo diet of Disney. I want red meat.
February 22, 2022 at 2:58 PM

Ted Gallagher NYC said…
For those who may be interested, the Rubenianum's latest, 4th quarterly newsletter of 2021 just dropped. It's in English and always insightful. You can register to receive it using the link, below.

The Rubenianum is "dedicated to the assembling, development and dissemination of information concerning the visual arts in the Netherlands in the sixteenth and seventeenth centuries, with particular concentration on the work of Peter Paul Rubens, Anthony van Dyck and Jacob Jordaens."

Anonymous said…
Does the Getty ask and answer the question, how the Louvre came into possession of the Borghese objects?

Given the current preoccupation with cultural looting, I wonder how the Getty would rationalize the transaction between Napoleon and Prince Borghese.
February 23, 2022 at 2:46 PM

Ted Gallagher NYC said…
Nothing has ever exercised the Italians more than the Mona Lisa [legitimately] residing in France. But Frankie I bought it fair and square five centuries ago, so there's sipping of a lot of bitter Italian tea.
BTW, I'm happy Guernica is now properly lauded in the bosom of non-fascist Spain, at Reina Sofia, where it belongs.
February 23, 2022 at 4:21 PM

Anonymous said…
One also has to wonder whether this exhibition would have been possible if the Borghese objects still resided in Rome.

Frankly, I am finding the backstory for this exhibition more interesting than the exhibition itself.
February 23, 2022 at 9:29 PM

Ted Gallagher NYC said…
I have never _ever_ known a more uncivilized and visitor-hostile museum than the Borghese Gallery. I go only if I'm forced. It's a sad, pitiable place.
I feel like they treat visitors like unwashed cogs, jammed into a pneumatic tube and whooshed into the place, only to be flushed out exactly 2 hours later, whether a visitor wants to go or not.
The place seems so patently money-hungry, I find every extra second I spend admiring an artwork, I am losing the chance to see another masterpiece before the "flush."
Any time I see a masterpiece from Borghese "freed" to the world, I celebrate.
Some museums have no business holding great art treasures.
Borghese is unrighteous among the nations.
February 24, 2022 at 8:34 AM

Anonymous said…
... And yet, if Poussin did NOT see The Borghese Dancers and Borghese Vase AT the Villa Borghese, there may be no "Poussin and the Dance."

In which case, business or no business, the Villa Borghese still played a pivotal role in creating "great art treasures."

... On a different note, the Getty is dumping its pension obligations on an insurance company. Former employees aren't happy.

See The Art Newspaper for a story on the scandal.

Ted Gallagher NYC said…
Well, pneumatics was a thing in Poussin's time, so maybe he got flushed, too.
What masters will do for their art!
February 24, 2022 at 6:46 PM

Anonymous said…
Seems like the previous Anonymous commenter is interested in washing Getty's dirty laundry in public. When you throw mud, you find traces of it on your own hands.
February 25, 2022 at 10:15 AM

Ted Gallagher NYC said…
I'm standing in the Met right now, positively mesmerized by one of the latest gifts on show, Nicolas Poussin's Agony in the Garden, oil on copper, ca. 1626–27.
It's a transformational gift by Jon and Barbara Landau in honor of Keith Christiansen, emeritus chair of the European Paintings Department.
Only two copper support paintings exist in Poussin's oeuvre (as opposed to canvas].
It's in polished-jewel condition.
A new fave.