How LACMA Grew, and Shrank 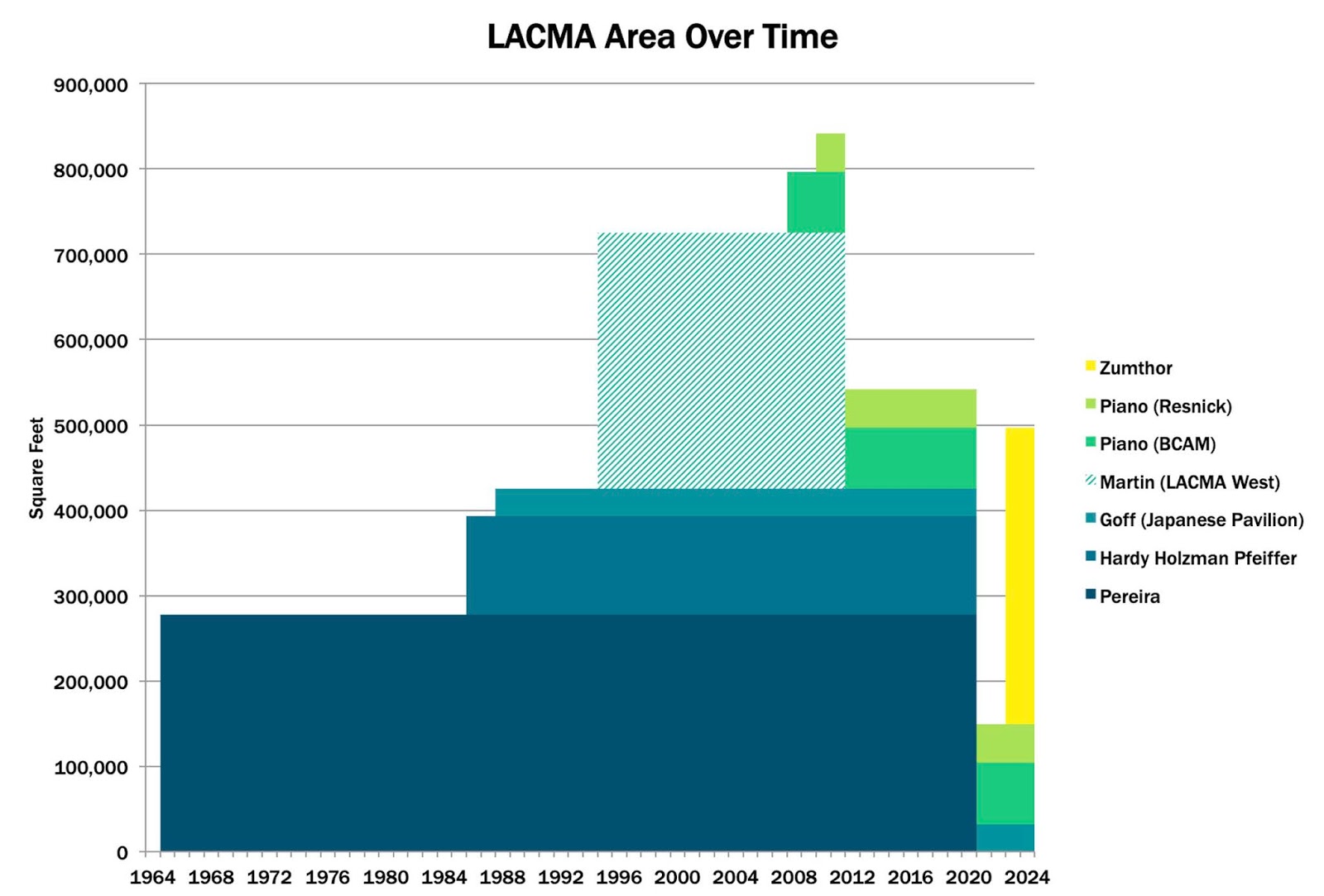 Here's a chart that may help to visualize the controversy over Peter Zumthor's LACMA building and its reduced square footage. It's an area chart of LACMA's area over time. That is, it shows total indoor space (not just exhibition space) of the museum's various Wilshire campus buildings from 1965 to the projected completion of the Zumthor project (the David Geffen Galleries) about 2024.

The William Pereira and Hardy Holzman Pfeiffer buildings they're tearing down are really, really big. (They're also really, really lousy, IMHO.) These structures account for 72 percent of today's museum by area.

The Zumthor project will shrink the museum's indoor area by nearly an acre, essentially nullifying the increase provided by construction of the Resnick Pavilion.

In 1994 LACMA bought Albert C. Martin Sr.'s May Company building (soon to be the Academy Museum of Motion Pictures), calling it LACMA West. For a decade the museum had exhibitions there, including van Gogh and King Tut blockbusters and a short-lived outpost of the pre-Autry Southwest Museum. Now the space is leased to the Academy. I have shown the LACMA West area cross-hatched, for the building was never fully occupied by LACMA. It was mostly reserved for future expansion. But note that the original May Company building had 300,000 sq. ft., almost as much as Zumthor's building does now (347,500 sq. ft.)

Museum square footage is just a metric. Like attendance figures it can get too much attention, simply because it's easier to measure than the experiential things that really matter. That's not to say that size of museum buildings doesn't make a difference. If you count LACMA West, the museum's square-footage peaked in 2010-2011. Area-wise, it's been downhill from there.
Email Post
Labels: Academy Museum of Motion Pictures LACMA Peter Zumthor Renzo Piano William Pereira

Anonymous said…
Certainly when people have to pay to enter a museum, size matters.

Nothing kills a day at a museum more than to come away feeling, "Is that all? That's it? There's nothing more?" That and a museum's collection already not being exactly of Louvre/Metropolitan/London Gallery caliber and proportions.

Then, too, the Govan-Zumthor Museum of Art apparently has merged its European and American departments. What the hell is that all about?
March 30, 2019 at 5:04 PM

Anonymous said…
Don’t understand why they can’t just extend LACMA towards the observation pit or over the main plaza. That should solve the space issue.
March 30, 2019 at 8:34 PM