"Soul of a Nation" at the Broad 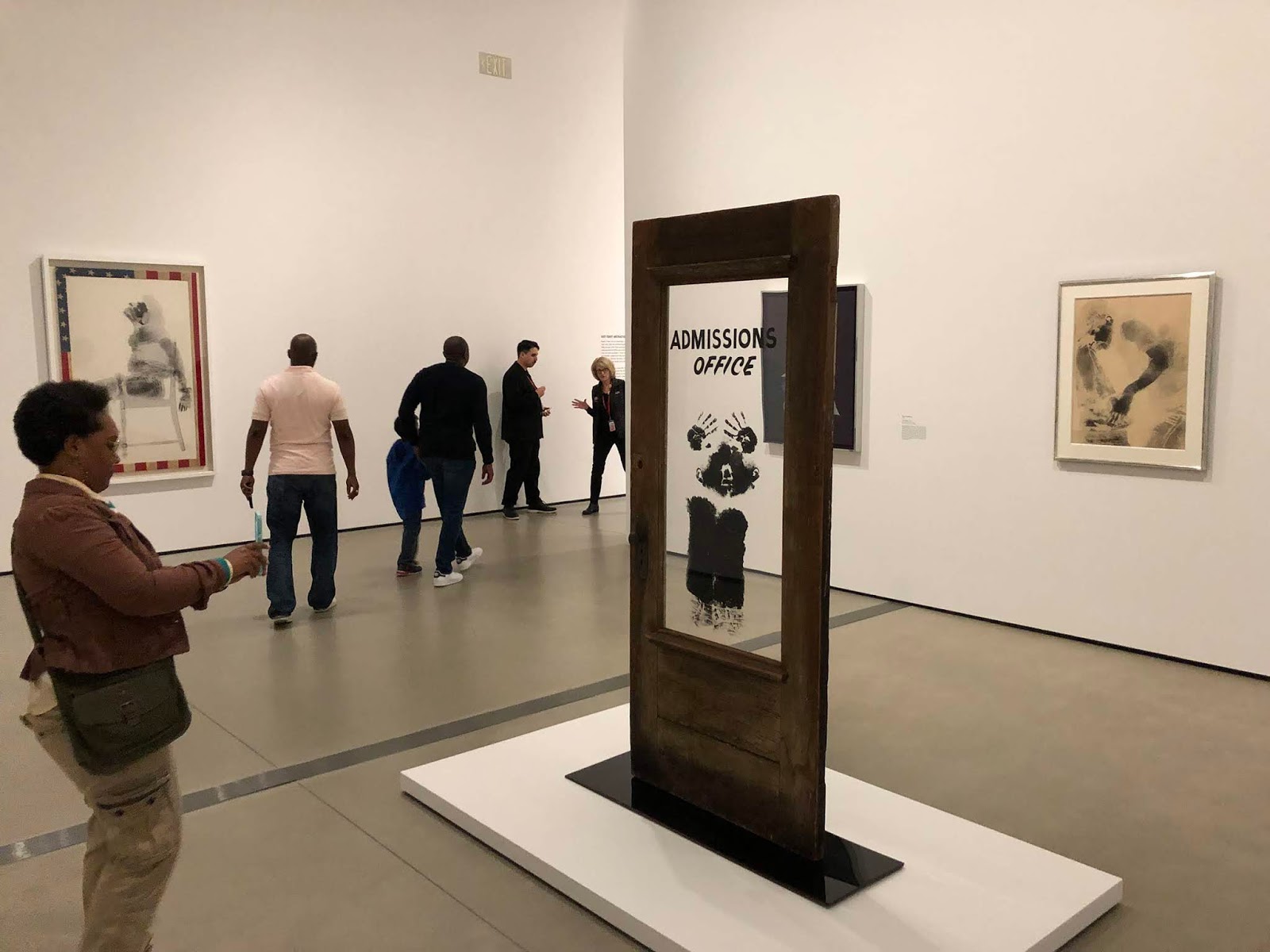 The Broad is generally a place with a high ratio of people dressed in black to black people. Not so this past weekend. The Tate Modern-originated "Soul of a Nation: Art in the Age of Black Power 1963-1983" has just opened at the Broad, its final stop after London, Brooklyn, and Bentonville.

The Tate is not known for deep expertise in African-American art, and the Broad is the temple of market-validated art. Yet "Soul of a Nation" is original and informative throughout. It has big names and well-known works, from Betye Saar's The Liberation of Aunt Jemima to Barkley Hendricks' Brilliantly Endowed.  But the show is most notable for its astute selection of under-recognized works. Some 60 artists are shown in ten rooms that are loosely chronological and geographical.
The Last Testament of Archibald Motley. Motley is known for comic depictions of black Chicago, created for black audiences. LACMA's 2014 Motley exhibition omitted his final painting, The First One Hundred Years… Ten years in the making, it's a mordant political allegory that disenchanted some of the artist's followers. Motley considered it his masterpiece, and I'd say we should believe him. It's like Tyler Perry morphed into Jordan Peele for the last Madea movie.
Politics v. Abstraction. The show's mainspring is the debate over whether black art must be political to be relevant. Abstraction commands a surprising amount of space. Jazz, held to be the most "abstract" music, was a popular talking point among nonobjective artists. Some artists produced both abstract and explicitly political work: Norman Lewis segued from AbEx to painting Klansmen before Philip Guston did.
The single Alma Thomas, Mars Dust, is great. New to me is an elegantly linear abstraction by Virginia Jaramillo. It's the not-so-political figurative artists who get short shrift. There are single works each by Bob Thompson and Beauford Delaney, and neither is the artist's best or most characteristic.
Jay-Z's David Hammons. Social media is buzzing that Jay-Z attended the Broad opening (solo) and talked up the work he lent, a print. That "print" is a unique David Hammons body print, Shine (1969). Credited  to "The Carter Collection," it's as fine a choice as any billionaire could hope for.
CAAM. Judging from the Broad survey, the really astute collector is the California African-American Museum. It has lent many of the pivotal L.A. works, such as Noah Purtifoy's Watts Riot, David Hammons' Admissions Office, and Betye Saar's Sambo's Banjo. 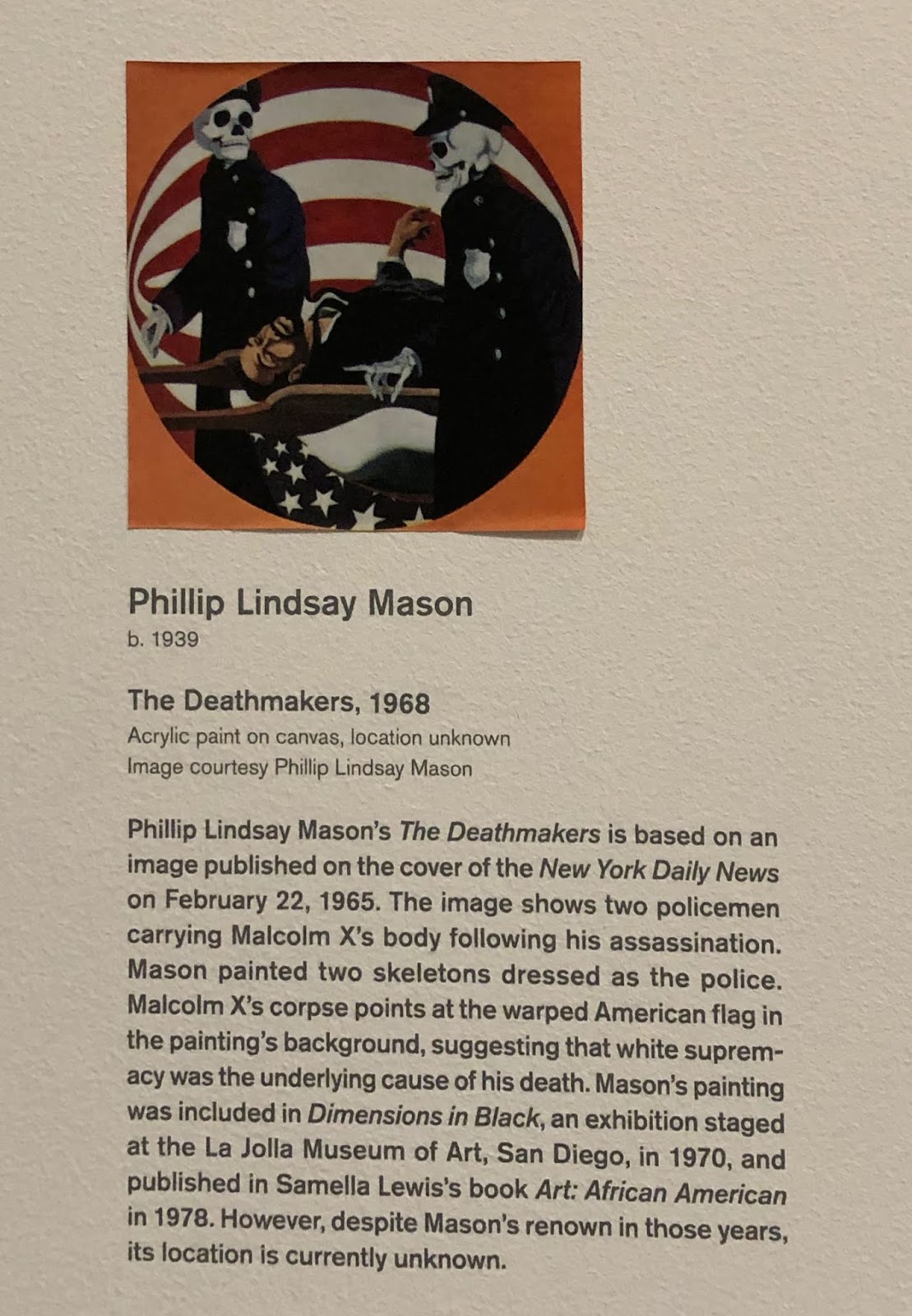 Have You Seen This Painting? No group show gets every work its curators wanted. "Soul of a Nation" has a label asking for information on the whereabouts of a missing Phillip Lindsay Mason painting, The Deathmakers. With calavera cops, dead Malcolm X, and an op-inspired flag, it ought to be hard to miss.
Puryear and Eversley in the BroadCave. Abstract sculptures by Fred Eversley and Martin Puryear are installed in the Diller Scofidio + Renfro lobby. The Puryear could almost be site-specific.