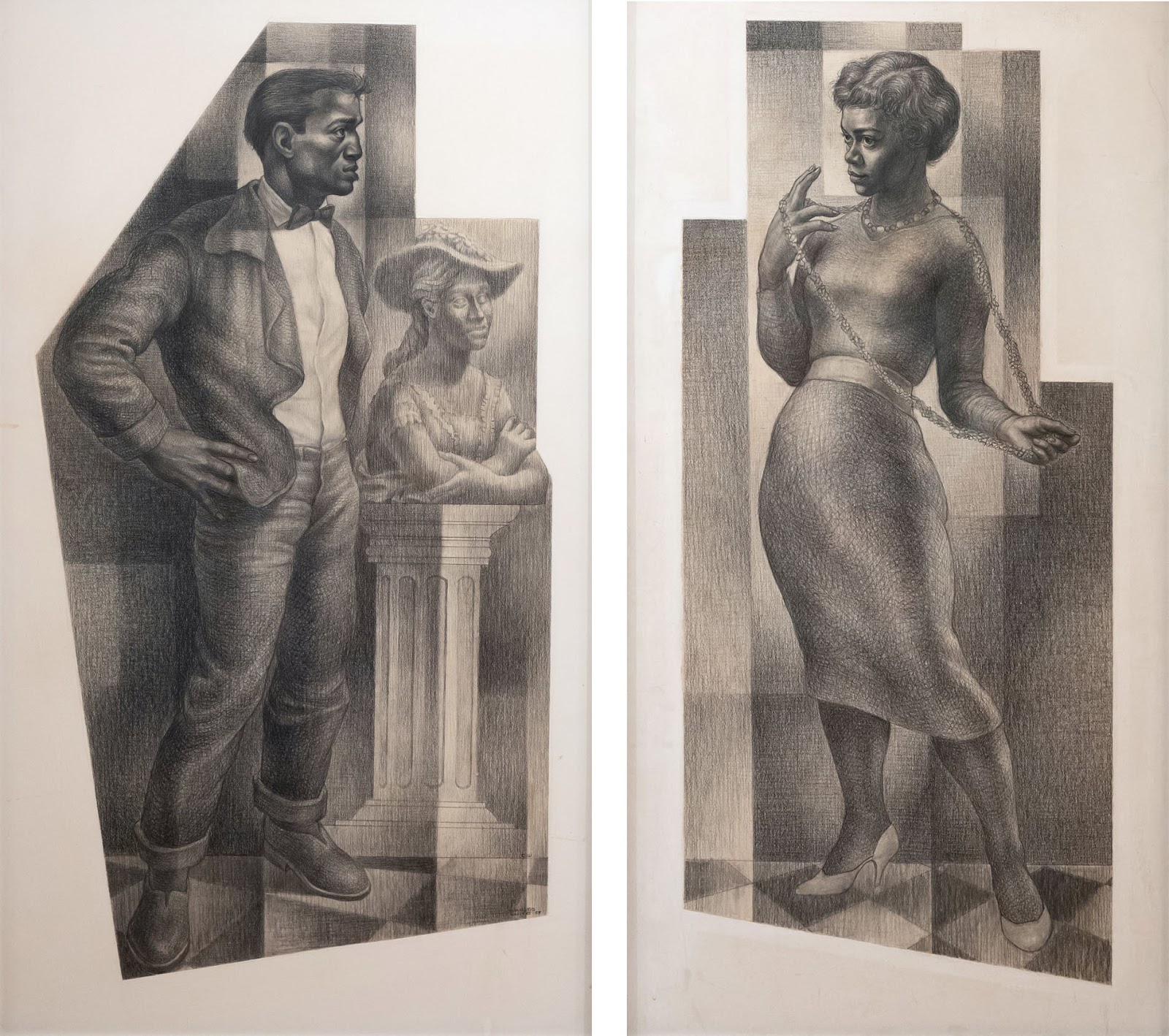 The AbEx 50s were a low point for figurative art. Some of its practitioners found side hustles with movie studios, among them Thomas Hart Benton, Ivan Albright, and Charles White. LACMA's "Charles White: A Retrospective" includes the artist's best-known work for the film industry, a triptych of three large charcoal drawings of the stars of the 1958 film Anna Lucasta. White's full-length portraits of Eartha Kitt and Sammy Davis Jr. appear briefly at the end of the film.

Starting in the 1950s, White did album cover drawings of jazz performers for Vanguard Records. His album work earned him a 1965 Grammy nomination. White also did graphics for a 1959 CBS-TV special, Tonight with [Harry] Belafonte. There White's drawings were used as bridges between musical and comedy numbers. (Yes, TV was a lot slower back then. Check out the opening Revlon commercial.)
In 1966 White portrayed Belafonte in his post-Watts J'Accuse series, first shown at L.A.'s Heritage Gallery. It is connected to an anthology of world music that Belafonte was planning.
Best known of White's mass-media commissions is the Anna Lucasta Triptych. Anna Lucasta was a 1936 play by Philip Yordan, adapted into two movies, the first in 1949. White's Triptych was created for the 1958 remake. Eartha Kitt plays the title role, a So. Cal. sex worker with a heart of gold. A pre-Rat Pack Sammy Davis is one of Eartha's two very different love interests, a military man. Yes, it sounds like Carmen Jones, which was four years earlier (itself based on Bizet's 1875 opera).
Shot in a month's time at Samuel Goldwyn's Hollywood studio, Anna Lucasta was a flop in its initial release. It's Kitt's gay fanbois, Rat Pack completists, and the Elmer Bernstein score that has perpetuated the film's memory and streaming revenue. White's drawings appear in Ken Burns-style pans and zooms before the closing credits.

Hollywood commissions do not necessarily bring out an artist's best work. But the draughtsmanship of the Anna Lucasta drawings is as assured as any other of White's works of the time. The shaped formats and tonal plane backgrounds set them apart. The center and largest image of the Triptych shows less-remembered actors Rex Ingram, Fred O'Neal, and Georgia Burke. It's lent by the incipient Lucas Museum of Narrative Art, part of its growing collection of African-American figuration.