Los Angeles museums are gearing up for thematic exhibitions on animals in Japanese art and and the Pattern and Decoration movement; single-artist surveys of Julie Mehretu, Betye Saar, Lari Pittman, and the late production of Édouard Manet. One recurring theme is beauty, a term that has been deprecated as frilly, feminine, and (a)politically incorrect. Several of this fall's exhibitions promise a more nuanced appraisal, with bodies of work ranging from Muromachi Japan to 2019 L.A.

Fall/Winter 2019-2020
LACMA's "Every Living Thing: Animals in Japanese Art" (Sep. 8–Dec. 8, 2019) follows closely on the Getty's "Book of Beasts." Organized by Robert Singer and Masatomo Kawai, and featuring Japanese National Treasures, it has spent the DC summer at the National Gallery of Art, pleasing critics and tourists alike. The L.A. showing promises less humidity and a number of Singer's most heroic LACMA acquisitions, such as the Maruyama Okyo Cranes (1772).

The Huntington is celebrating its 100th anniversary with "Nineteen Nineteen" (Sep. 21, 2019–Jan. 20, 2020). It will show about 250 objects—literary, historical, scientific, and artistic—that were made or acquired the year Henry and Arabella Huntington established their temple to high culture.

ICA-LA aims a bit lower with "No Wrong Holes: Thirty Years of Nayland Blake" (Sep. 29, 2019–TBA). Blake studied at CalArts and this, his first L.A. retrospective, foregrounds the pivotal work he made in L.A. and San Francisco.
This fall LACMA will have three simultaneous retrospectives of major woman artists. That ought to be no big deal, but it's still notable for a major art city's lead art museum. "Mary Corse: A Survey in Light" is already on view (through Nov. 11, 2019). To come are the much-anticipated "Betye Saar: Call and Response" (Sep. 22, 2019–Apr. 5, 2020) and "Julie Mehretu" (Nov. 3–May 17, 2020). All three exhibitions overlap in early November.

The UCLA Hammer Museum will present the first Lari Pittman retrospective in over 20 years (LACMA did the first in 1996). Filling the entire museum, "Lari Pittman: Declaration of Independence" (Sep. 29, 2019–Jan. 5, 2020) will present about 130 objects, including the monumental Flying Carpets paintings. An environmental installation called "Orangerie" will show works on paper.

In October the Getty Villa opens a long-term (nearly 3 year) loan of Assyrian objects from the British Museum. "Assyria: Palace Art of Ancient Iraq" runs Oct. 2, 2019–Sep. 5, 2022.
"Through a Different Lens: Stanley Kubrick Photographs" explores the film director's early photojournalism for Look magazine. Organized by the Museum of the City of New York, it comes to the Skirball Center Oct. 17, 2019–Mar. 8, 2020.

The Broad will follow up "Soul of a Nation" with "Shirin Neshat: I Will Greet the Sun Again" (mid-Oct. 2019 through early 2020). This ought to confirm how essential the Broad has become for loan shows.
The Getty's "Manet and Modern Beauty," organized with the Art Institute of Chicago, focuses on the sunset years of Manet's career. The Getty's Jeanne (Spring) will be reunited with Autumn (Méry Laurant), from a projected group of four modern Parisians representing the seasons. Jeanne was shown at the 1882 salon with the much better known A Bar at the Folies-Bergère. That won't be here (it was at the Getty in 2007), but there will be a selection of late genre scenes and still lifes (Oct. 8, 2019–Jan. 12, 2020).

Beauty is also the subtext of MOCA's Anna Katz-curated "With Pleasure: Pattern and Decoration in American Art 1972–1985" (Oct. 27, 2019–Mar. 30, 2020). New York's Hudson River Museum did a much smaller P&D show in 2007. At that time the NYT's Holland Cotter wrote that P&D was due for reappraisal: "Art associated with feminism has always had a hostile press. And there was the beauty thing… no one knew what to make of hearts, Turkish flowers, wallpaper and arabesques."

Much P&D history took place, not along the Hudson but along the Valencia-LA-San Diego fault line. The MOCA show will cast a wide net, including artists not normally considered as P&D, such as Billy Al Bengston, Betty Woodman, and Al Loving. This is the sort of thematic history that made MOCA's reputation.
For more of the beauty thing, you'll want to check out "Rina Banerjee: Make Me a Summary of the World" at the UCLA Fowler Museum (Dec. 8, 2019–May 31, 2020) and "Fiji: Art & Life in the Pacific" at LACMA (Dec. 15, 2019–June 14, 2020). The latter is an international loan exhibition with over 225 works, spanning sculpture, weapons, kava bowls, and garments. They'll be juxtaposed with vintage photographs and European paintings. A 26-foot double-hull canoe, created by Fijians using traditional techniques, is being commissioned for display.

LACMA will also survey Chinese painter Qiu Ying (about 1494–1552), most mysterious of the "Four Masters of the Ming Dynasty" and the most copied and forged painter in Chinese art history. Curator Stephen Little said: "I’m a student of fakes; I love copies and forgeries, and I’m interested in exploring the differences between the two concepts in this show." The cleverly titled "Where the Truth Lies: The Art of Qiu Ying" runs Feb. 9–May 17, 2020.

Looking Forward: Spring 2020 and Beyond 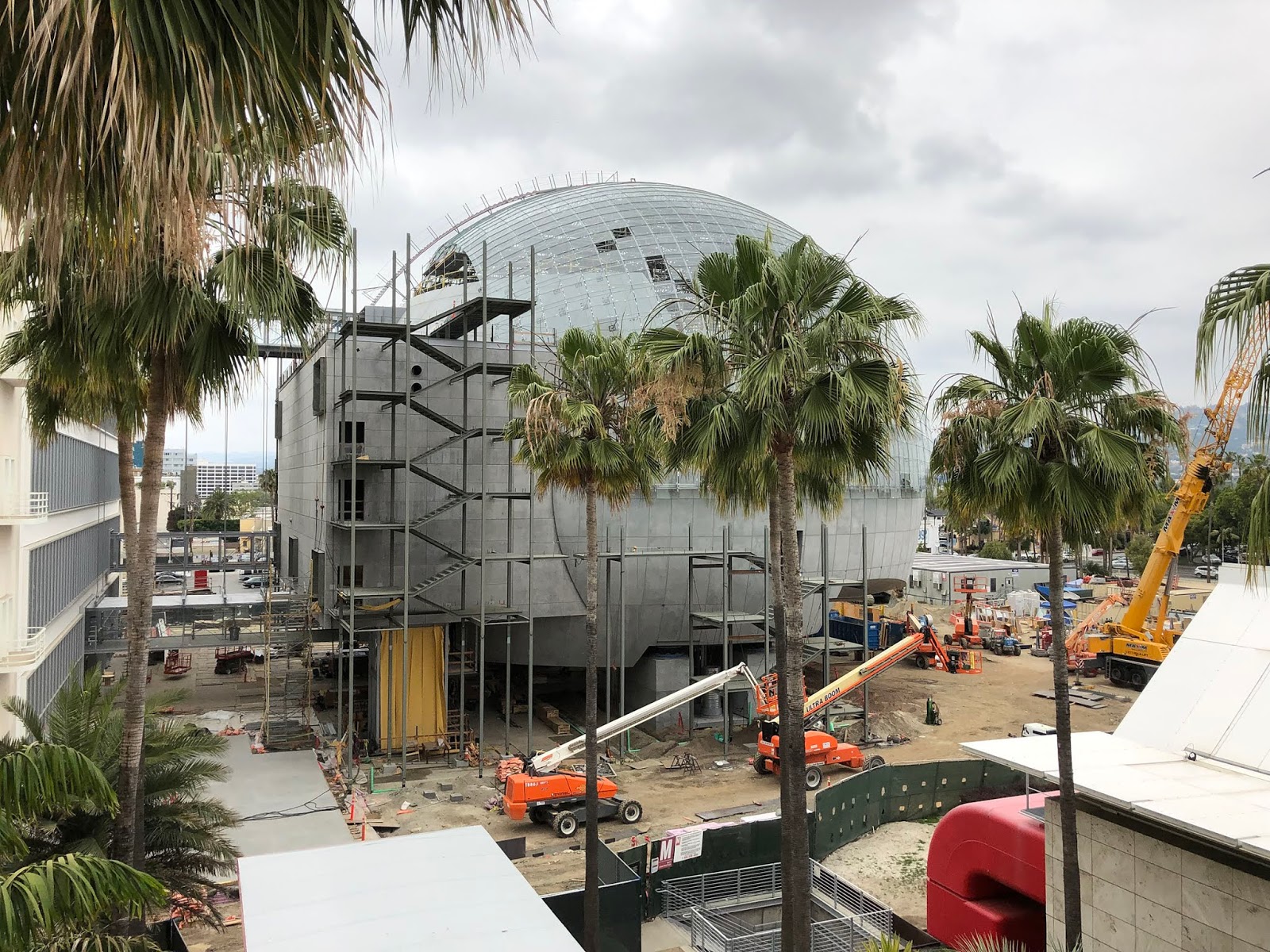 We're told it's not going to happen by the Oscars. The departure of Kerry Brougher sure didn't help. But the long-delayed Academy Museum of Motion Pictures has to open sometime in 2020. Right? First up will be "Hayao Miyazaki," followed by "Regeneration: Black Cinema 1900–1970."
The Getty has more precise dates for "Michelangelo Drawings" (Feb. 25, 2020–June 7, 2020). Yes, the Met just did Michelangelo drawings. The Getty show will draw from the extraordinary group of drawings at Harlem's Teylers Museum and be curated by Julian Brooks and Edina Adam.

The Huntington is to complete its Chinese Garden expansion in May 2020. This includes a small (1720 sf) exhibition space, the Studio for Lodging the Mind. The inaugural exhibition is "A Garden of Words: The Calligraphy of Liu Fang Yuan," featuring the work of 21 contemporary ink artists.
For further proof that MOCA is back, the Geffen is to showcase Pipilotti Rist (spring/summer 2020); Henry Taylor and Tala Madani (winter 2020–spring 2021).
"Yoshitomo Nara" views the artist through his engagement with music and is to include a monumental painted bronze sculpture on Wilshire. Michael Govan curates, along with Mika Yoshitake.

"Gwynn Murrill: Animal Nature" supplies a coda to the animal theme at Pepperdine's Weisman Museum of Art, May 6–July 26, 2020.

Late in 2020 LACMA plans to open a temporary installation of its European and American modern collection on the top floor of BCAM. It's sure to draw out-sized scrutiny, given the muddled "To Rome and Back" and concerns about LACMA's ongoing commitment to its permanent collection. Stephanie Barron curates, so it's sure to be a smart use of the allotted space. (I'm not sure it will say a lot about the Zumthor future.)

The Santa Barbara Museum of Art plans to reopen its new exhibition space in fall 2020 with "Through Vincent's Eyes: Van Gogh and His Sources." Fifteen van Gogh works will be shown alongside a hundred-some objects by artists van Gogh admired, among them Delacroix, Millet, Monticelli, Tissot, Monet, and Gauguin.

Titles and dates are subject to change.

Anonymous said…
Hey, nothing planned at the Marciano?

Does a commercial gallery along the lines of Hauser and Wirth in the Arts District deserve a slot?

When the Lucas opens, will there be enough page space to mention?

I recall the time when:

"Back then, after finishing each program, I would scratch my head wondering, 'How the hell am I going to find something equally interesting and important to talk about next week?'"

Anonymous said…
Guston? A museum-type show in what's still largely a for-profit commercial gallery? A fine line, to be sure, but not too shabby. It's all good. At least it's free to enter.

By contrast, look at what's going on with a public trust in the form of the county-owned museum on Wilshire. A place that has taken decades to build. By thousands of people. It isn't free to enter, unlike what is soon going to be true of MOCA. The country-owned museum on most days charges a rather high admission fee, even more so since its galleries are being increasingly shuttered.

Not sure what the shelf life will be for the Marciano as a non-profit. Or the shelf life of the Hauser and Wirth as a for-profit. But who'd have ever thought one of the originals dating back to 1965 (post-Exposition Park) might not be one of them?
August 12, 2019 at 6:07 PM

Amadeus said…
Looks like LACMA won't be having any blockbuster shows until the new building?
August 12, 2019 at 9:33 PM