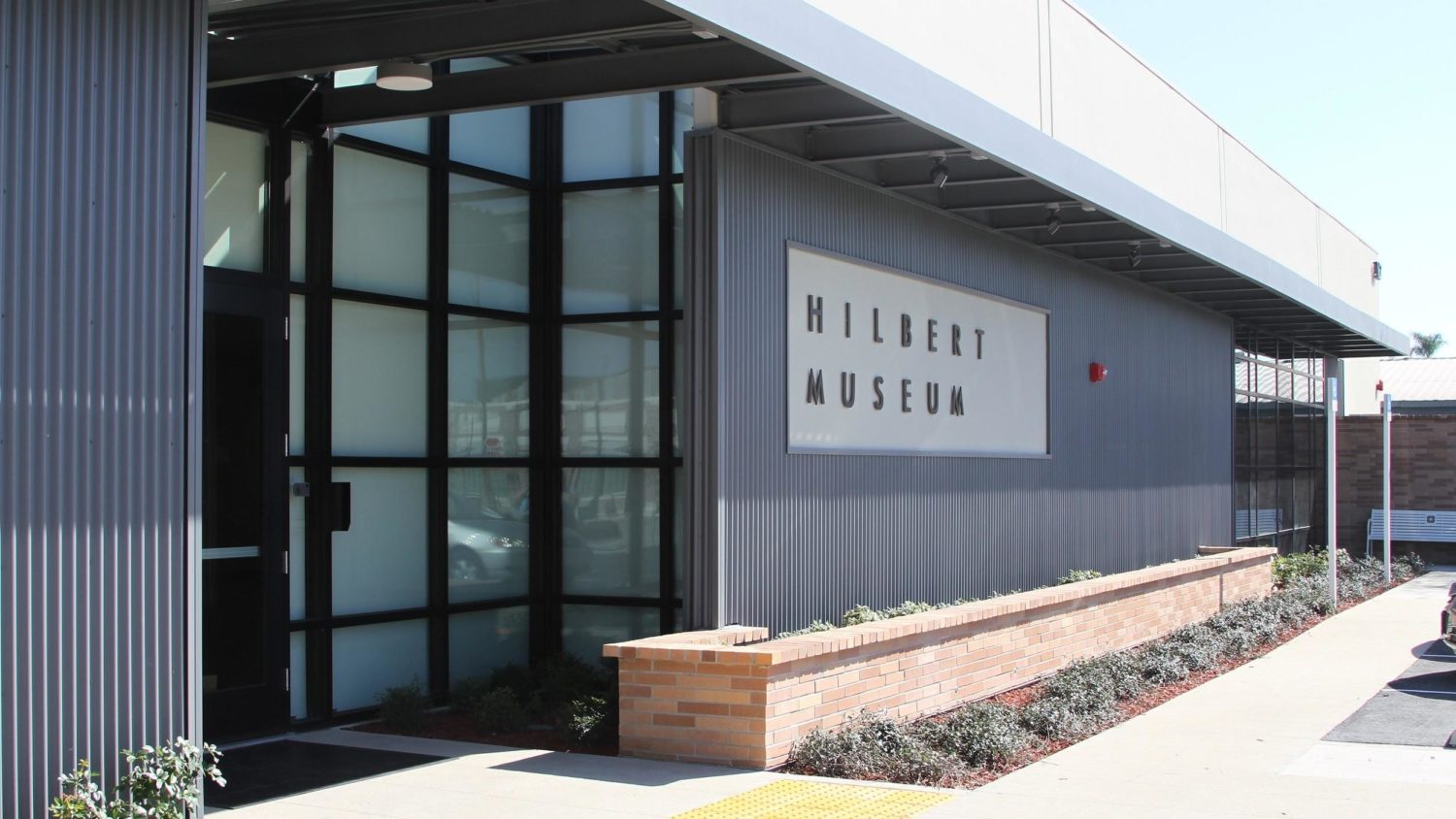 Chapman University's Hilbert Museum of California Art has announced plans to nearly triple in size. In a $3 million-plus makeover, the Hilbert is to expand into a nearby Chapman University dance building, increasing its area from 7500 to  21,000 sq. ft.

To put that in perspective, the Hilbert is gaining about 1/3 as much space as LACMA is losing in the Zumthor project (for about 1/185th the cost).
Unlike LACMA, the Hilbert has a narrow focus on California's version of American Scene painting. The Hilbert's holdings and scope continue to grow however. It recently announced plans to acquire one of the best-known of Millard Sheets' murals for the former Home Savings and Loan. The 40-foot-wide Pleasures Along the Beach (1969) was commissioned for Santa Monica's Home Savings on Wilshire (now a New Balance athletic shoe store). Mosaic artist Nancy Colbath pieced together Venetian glass tesserae to realize Sheets' design, even his signature.

Sheets' Home Savings murals pose a dilemma for preservationists. They are more nostalgia than art history. The public demands they be preserved, but neither landlords nor most art museums know what to do with them.

Santa Monica had declared the Wilshire building a landmark. The current owners, wanting to build a larger structure on a now-more-valuable lot, sued. A deal was struck for the owners to donate the mosaic and two bronze sculptures (Richard H. Ellis' Family Group and John Edward Svenson's Child on a Dolphin) to the Hilbert, and to pay the not-inconsiderable cost of removal and transport.

The Hilbert has a significant holding of Sheets' paintings and works on paper, among them a melancholic 1933 watercolor of the San Dimas Train Station. The Pleasures mosaic will ultimately be shown on an outside wall of the expanded museum. 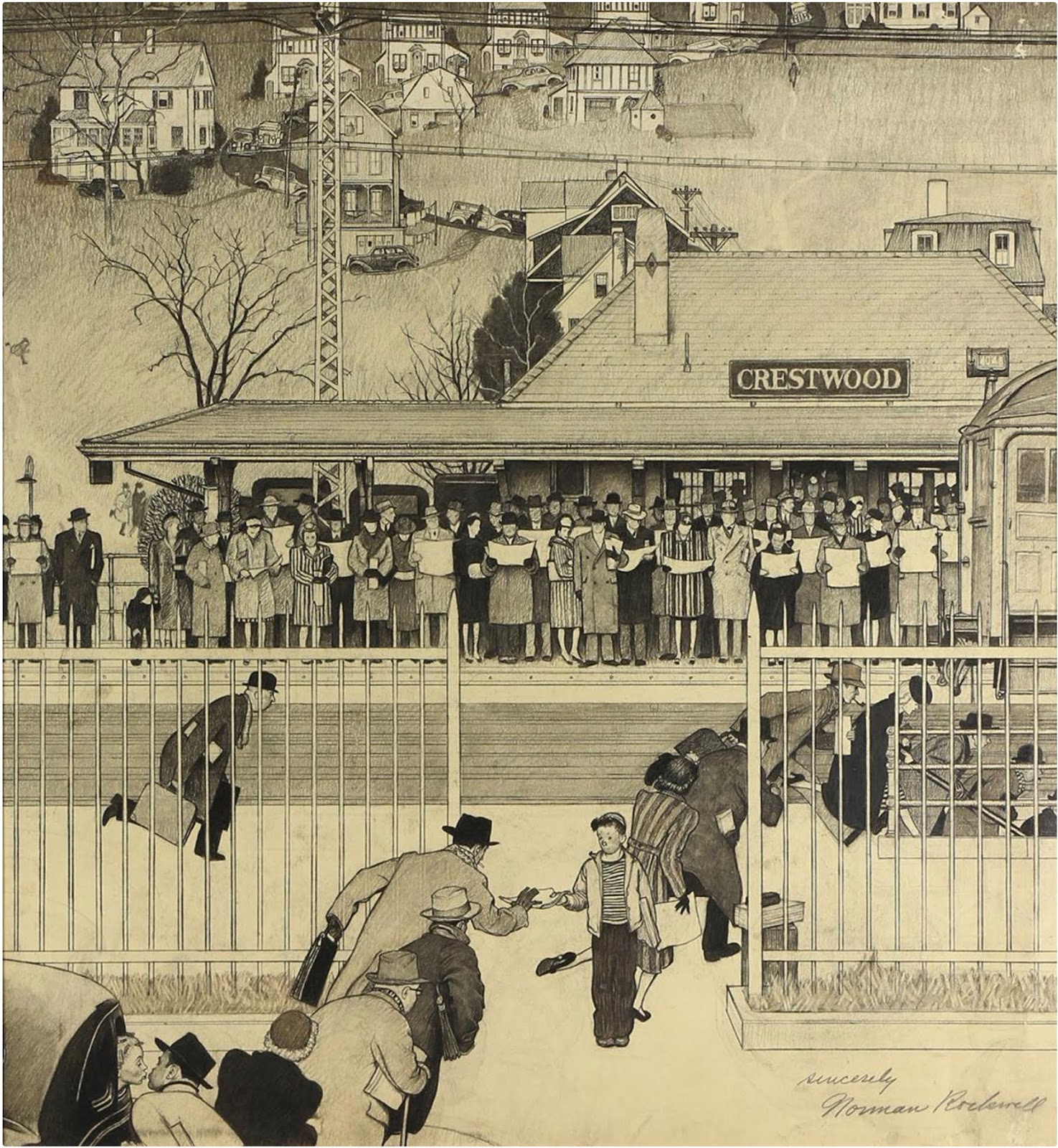 Another recent Hilbert acquisition is a double-sided charcoal drawing by Norman Rockwell, Crestwood Commuter Station (1946). Auctioned for $200,000 in Sept. 2018, it was donated by museum founder Mark Hilbert.

Rockwell isn't thought of a California artist, though he spent time in Los Angeles and created some of his Saturday Evening Post covers here. (The Lucas Museum of Narrative Art recently bought one of Rockwell's Los Angeles illustrations, and LACMA has another.) Crestwood Commuter Station is quintessentially East Coast, however, depicting a train station in Yonkers, NY. Rockwell serves his usual cornball with the figures. The most interesting part might be the landscape at top, poised between architectural rendering and Precisionism. (The drawing's opposite side is a portrait of a Vermont neighbor.)

The Crestwood drawing preceded a painting (now in a private collection) and a Saturday Evening Post cover. All are united in a focus show at the Hilbert through Oct. 19, 2019.
Email Post
Labels: Hilbert Museum of California Art Millard Sheets Norman Rockwell

Anonymous said…
I recall seeing a Rockwell hanging in the American galleries of LACMA a few years ago and feeling slightly uneasy about it. I react the same way when viewing Pre-Raphaelite artwork, such as a few displayed at the Getty. Those works are technically very skilled, but they're stylistically reminiscent of coming upon a woman wearing way too much perfume.

That's why the Lucas will be a good setting for such types of visual art. The place in Expo park will be more of a mass-consumption museum, which is a needed counterbalance to the often esoteric or too hipster-effete nature of the Broad, MOCA, Hammer or Marciano.

As for the expanded Hilbert? Compared with what's going on at LACMA---operation-wise, building-wise, budget-wise? A lawsuit for cultural malpractice needs to be filed against the pending disaster on Wilshire.

Anonymous said…
@anonymous Many individuals of the Art Elite™ such as Christopher Hawthorne detest the Lucas Museum, but I agree it'll be a nice fit. I'm warming up to Rockwell, but he isn't my favorite. However, a lot of people do like his work. There's artistic value in Rockwell's "illustrations" and other forms of art such as comics and children illustrations. It'll provide a good balance to the other museums as well as add another tourist attraction when it's Olympics season in 2028.

Also, it's nice to see museums such as the Hilbert and Hammer using their funds to expand rather than retract like another museum that shall not be mentioned.