Bronzino & Renaissance Loans at the Getty 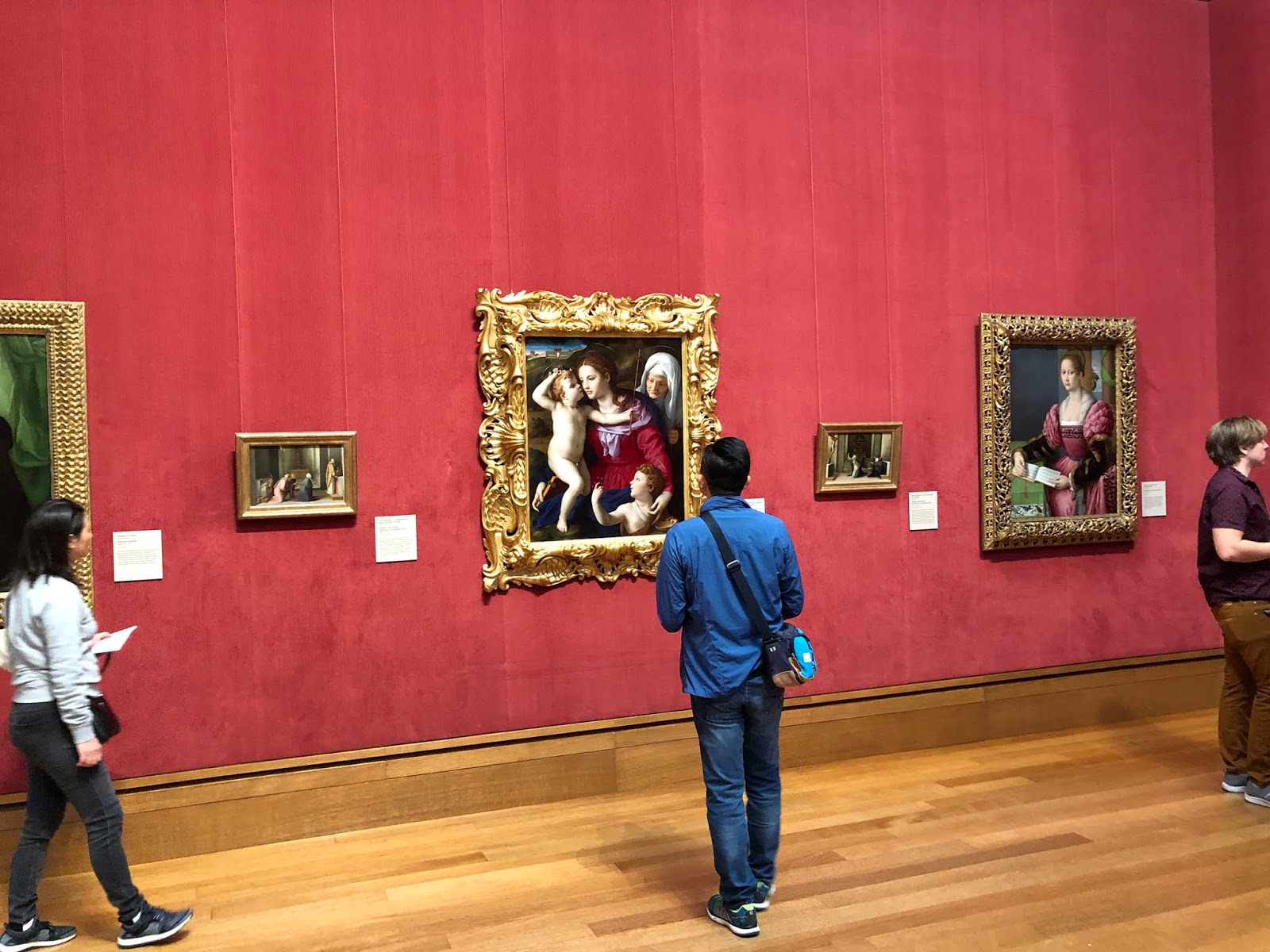 The Getty Museum has put on view its new Bronzino Virgin and Child. Between that and a trio of loans, room N204 now holds a capsule history of later Renaissance painting unlike any you'll find in a U.S. museum. On view are High Renaissance paintings by Fra Bartolomeo and the studio of Leonardo da Vinci; Mannerist works by Pontormo, Rosso Fiorentino, and Parmigianino.
Just about everyone agrees the new Bronzino is stupendous. It's a more vividly colored twin of a painting long in the UK National Gallery. It's suggested that the Getty painting represents morning, while the London painting represents night. If so, Bronzino scooped Monet on time-of-day serialism.

The Getty's painting has an auricular frame, an echt-Baroque style favored at the Palazzo Pitti. ("Auricular" means like an ear, referring to the curves.) Though the frame is an anachronism, the gilded heads at each corner look back to Renaissance grotesquerie.
Nearby are two works from Leonardo's circle, both loans. From UCLA is a large Virgin and Child with Saint Anne from Leonardo's studio. The autograph original, psychoanalyzed by Freud, is in the Louvre. The UCLA painting is apparently a workshop copy with variations, hypothetically assigned to the artist's pupil and boyfriend Andrea Salai. The Louvre picture is a soupy brown with weak blues. The UCLA version may give a better impression of the intended colors.

Virgin and Child with Saint Anne is from the collection of Willits J. Hole, a Los Angeles real estate developer who built a private gallery of Old Masters onto his Hancock Park home. His daughter donated the paintings to UCLA in 1938. They were installed in the university library, and scholars began chipping away at the ambitious attributions.

UCLA had few European paintings until 1995, when it assumed control of Armand Hammer's vanity museum. The conditions of Hammer's gift restrict the university from showing other paintings with Hammer's in Westwood. The Virgin and Child has been on loan to the Getty since 2013.
A more recent loan, from an unidentified private collection, is Madonna Suckling the Infant Christ by Giampietrino, a close follower of Leonardo. Auctioned at Sotheby's last year, it went for £269,000. The darkened background is a trellis with greenery. The trellis is more apparent in the Sothebys photo than my iPhone snap above. The most unconventional color note is the orange sleeves (compare the unexpected lavender scarf in the Bronzino)

Florentine Mannerism began with two of Andrea del Sarto's pupils, Pontormo and Rosso Fiorentino. The Getty's definitive Pontormo portrait is now joined by the loan, from LACMA, of an unfinished Rosso altarpiece, Allegory of Salvation. Like Leonardo, Rosso left some of his work unfinished, perhaps intentionally. According to Vasari, Rosso's oil sketches gave "a sort of savage and desperate air to the faces," which clients found disturbing. Rosso would then "sweeten the expressions and bring them to a proper form."

In its unfinished state Allegory of Salvation shows Rosso at his most radical. It's the most important of just three Rossos in American museums. Allegory was a 1954 gift to the Los Angeles County Museum from Herbert Kalmus. Known as the inventor of Technicolor, Kalmus has a star on Hollywood Boulevard.

Pontormo established an artistic dynasty. He not only taught Bronzino but adopted him as his heir. In turn Bronzino taught Alessandro Allori and named him his stepson. Allori is not remotely as renowned as his forebears, but the Getty has a big, cinematic Allori, The Abduction of Proserpine (1570). Long in storage, it is now on view in a first-floor sculpture gallery, E101. The Abduction was created for the suburban villa of Florentine plutocrat Alamanno Salviati. Two related commissions, Narcissus at the Pool and Aeneas Fleeing the Burning of Troy, are comparably large and outré. They're at the Turkish Ambassador's Residence in Washington, DC.

Without it, LA in 2019 wouldn't have any decent semi-general art museum. Everything else is geared to either the contemporary or the very nation-region-specific, such as the Huntington.

Thanks for the memories, 5905 Wilshire Blvd.