There's not much museum news these days, so this week I will spotlight some recent acquisitions at local institutions. First up is the Broad, which has added works by Roy Lichtenstein, Kara Walker, and John Baldessari. (And Andy Warhol, as mentioned in a post last month.)

Lichtenstein's Things on the Wall (1973) trolls centuries of trompe l'oeil gimmickry, from flies and nails to letter racks and William Michael Harnett's Golden Horseshoe. At upper right is a fragment of the artist's own Cape Cod Still Life, a painting created the same year.

Things on the Wall invites comparison to Stretcher Frame (1968), another Lichtenstein in the Broad collection. It's a simpler Benday dot treatment of the back of a painting, a pop take on minimalism.
Also new to the collection is Kara Walker's mordantly topical The White Power ‘Gin / Machine to Harvest the Nativist Instinct for Beneficial Uses to Border Crossers Everywhere. Shown at Frieze London last October, it's an 18-foot-wide triptych in pastel, charcoal, and oil stick, plus a set of 12 smaller drawings. 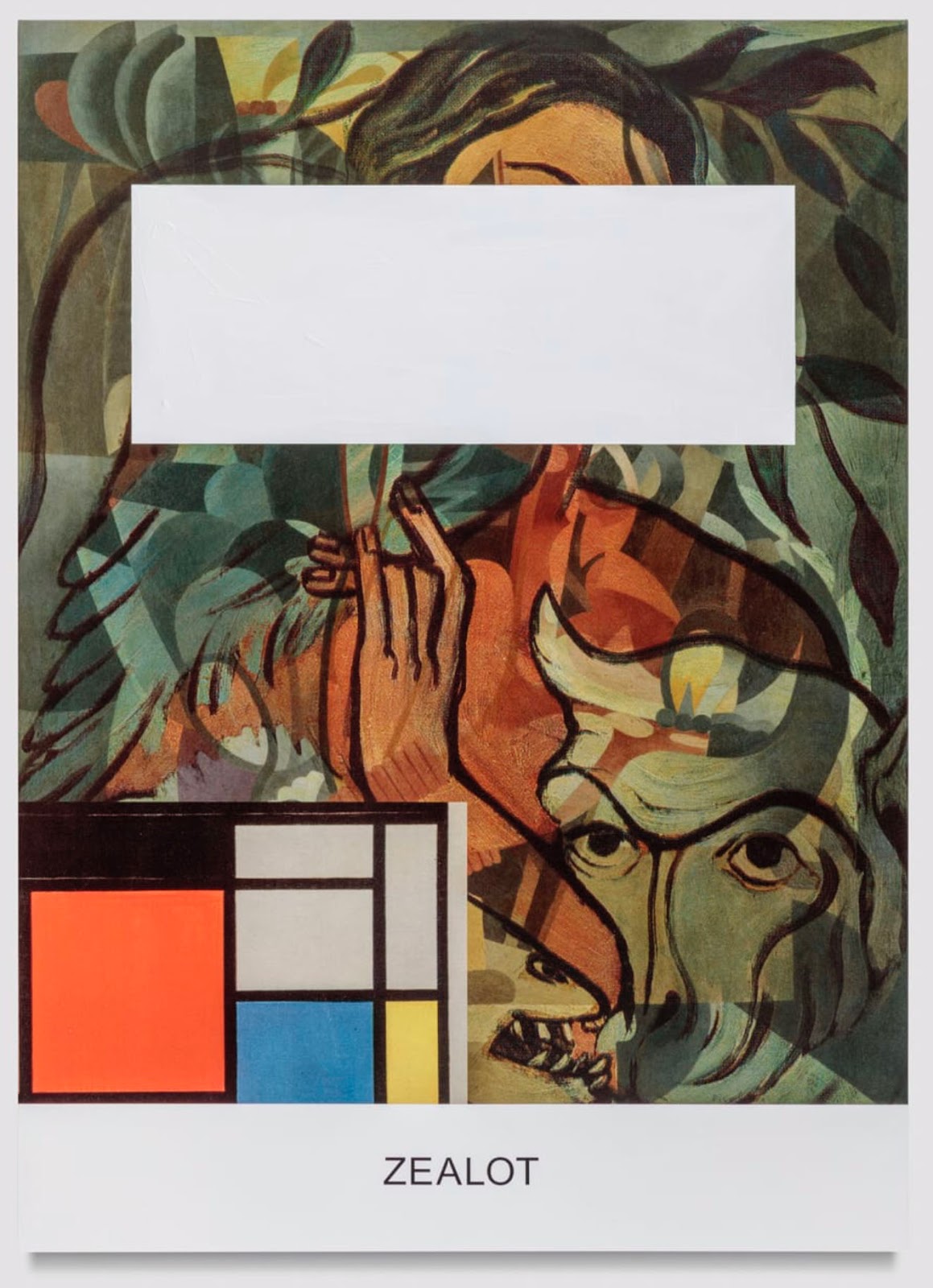 John Baldessari's All Z's (Picabia/Mondrian): Zealot (2017) is from one of the last major series of the late artist's career. Details from Francis Picabia's "transparencies"—once considered regressive, now the object of a cult following—are juxtaposed with echt-modern Mondrian abstractions and given a caption/title starting with Z.

The Broad had planned to debut these works in a series of single-artist installations marking the museum's 5th anniversary. The anniversary shows will surely be realized, but the timing is anyone's guess.
Email Post
Labels: John Baldessari Kara Walker Roy Lichtenstein The Broad

Beyond that, I've always wondered why the outdoor area west of the Broad was never set aside for sculptures. I realize the connector transit line is being built and will connect from across Hope St to Broad's upper level. But I'm not sure if that location is ever going to be more than a passageway.

Maybe Broad doesn't have enough outdoor sculptures to justify an exterior exhibit area. If so, a lost opportunity. MOCA across the street doesn't have much in that same category too.
March 23, 2020 at 9:08 AM

Anonymous said…
Let's talk about the works the Broad did NOT buy:

Both artists have received a lot of curatorial support elsewhere (e.g., 2019 Venice Biennale). If I were them, I would also keep an eye on Lauren Halsey, similar pop, mythopoetic aesthetic as da Corte.

Anonymous said…
^^^ Adding to what I said above.

It would be refreshing if the Broad staked a claim to the future and didn't just wait for the market or his coterie to determine what is a "blue-chip" artist.

For example, how about something from Karl Haendel? Haendel is an artist who has been expanding on the work of another artist in the collection (Baldessari). See, for example, Haendel's prescient "Civil War" drawings from the Whitney Biennial or his witty, but structurally-profound, "fractional" drawings of Monkeys/Eagles over shapes.

Or, how about something from Matt Saunders? Saunders has been trying to reinvent painting and thus following in the footsteps of two other artists, Mehretu and Richter. All three are represented in fact by Marian Goodman, who has an excellent eye for these things. Given that pedigree, Saunders would have been a better choice than Josh Smith who has one work in the collection and E. Hundley who has 2.

On that note, I was surprised to discover just now that there are no works by Richter or Hockney in the Broad collection. Seems like a major oversight when one considers that there are 7 works by Peter Halley. Someone should feel real stupid for jumping on the Halley bandwagon, an artist who made his mark in the 80's by trying to represent carceral logic (Foucault). It was silly then and it looks even sillier now.

At this stage, it's obvious a Hockney and Richter won't come cheap. David Geffen just spent $30 million at auction for Hockney's Splash. At auction, excluding the record price in 2015 for Abstraktes Bild, Richter's price range has been $28 to $34 million. I think the most the Broad has ever spent at auction is $12 million (Bradford's Helter Skelter). ... If Eli want's his museum to become something more than a collection of "hits" and "misses", he's going to have spend more money and/or stake a true claim to the future for itself.
March 24, 2020 at 8:34 AM

Anonymous said…
I've been curious why David Hockney has been off the radar of the Broads since they started collecting. Even more so since Hockney has a local angle.

Anonymous said…
In a interview, Heyler, the Director of the Broad Museum, addressed the omission of Hockney and Bacon:
"Eli is more often moved by content that is political or historical or connected to the real world, so to speak. He’s a little more attracted to social content" (https://www.christies.com/Features/The-Broad-Museum-Los-Angeles-Interview-7318-1.aspx).

Here's the problem with that statement: First, it's naive. There is political and historical content in Hockney and Bacon. It's just not so obvious as it is in Ligon or others. It's filtered through the lives of their lovers. Which makes me wonder if it's the type of love that is the real problem.

On that note, I had to check what examples of Mapplethorpe's work there are. Consistent with my assumption above, there's two portraits (one each of Broad and his wife) and some flowers.

I suppose one could counter with the large number of works by Warhol, but to the extent that Warhol filters his homosexuality for the most part through the ritual of consumption there is nothing there that truly counts.

Indeed, the number of Warhol works in the collection just serves to contradict Ms. Heyler's claim even more if we remember that Richter's relation to the historical and political is similar to Warhol's, especially in the photo-paintings. Yet, Warhol figures prominently in the Broad collection and Richter does not. So, even if we take Ms. Heyler at her word, it makes Richter's omission even more incomprehensible.

So, I think it's somewhat more complicated than Ms. Heyler makes it seem. And, while I wouldn't go so far as to call Mr. Broad a homophobe, it would not be a stretch to imagine that he likes art that provides a more "sentimental" picture of the social and political world. By "sentimental" here, I mean both a feeling that something has been lost and a romantic view of what that was. In which case, a heterosexual variant of Hockney (Jonas Wood) is great, but not Hockney himself; a romantic German artist like Kiefer, but not the agnostic, skeptical Richter; or a gay artist like Mark Bradford who filters his race and sexuality through "abrasive" abstractions, but not a gay artist like Bacon who disembowels his lovers and everything else.

Of course, it could also be as simple as this: Eli is known for driving a hard bargain and at least early on for being a collector who was always looking for a bargain. That being the case, it's likely there are no works by Hockney because he could not buy them in bulk at "Costco" prices. And, there are no works by Richter because his "bargaining style" and his thriftiness did not ingratiate him with some gallerists. See this for more on the subject: https://www.newyorker.com/magazine/2010/12/06/the-art-of-the-billionaire