The Santa Barbara Museum of Art reopens in full Aug. 15 after a six-year, $50 million campaign of deferred maintenance, renovation, and reinvention. SBMA Director Larry Feinberg describes the work as 80 percent unglamorous. From the outside, not much has changed. Kupiec Architects PC have respected the 1912 building (a deluxe Italianate post office) that was repurposed as an art museum in 1941 and expanded several times. Instead of building a new wing the architects have been charged with implementing a laundry list of grace notes. Meanwhile curators have rethought and reinstalled the 27,000-piece permanent collection. For the visitor, the big takeaway is a new commitment to contemporary art. For the first time, there are dedicated second-floor galleries for contemporary art, photography, and video and digital art. 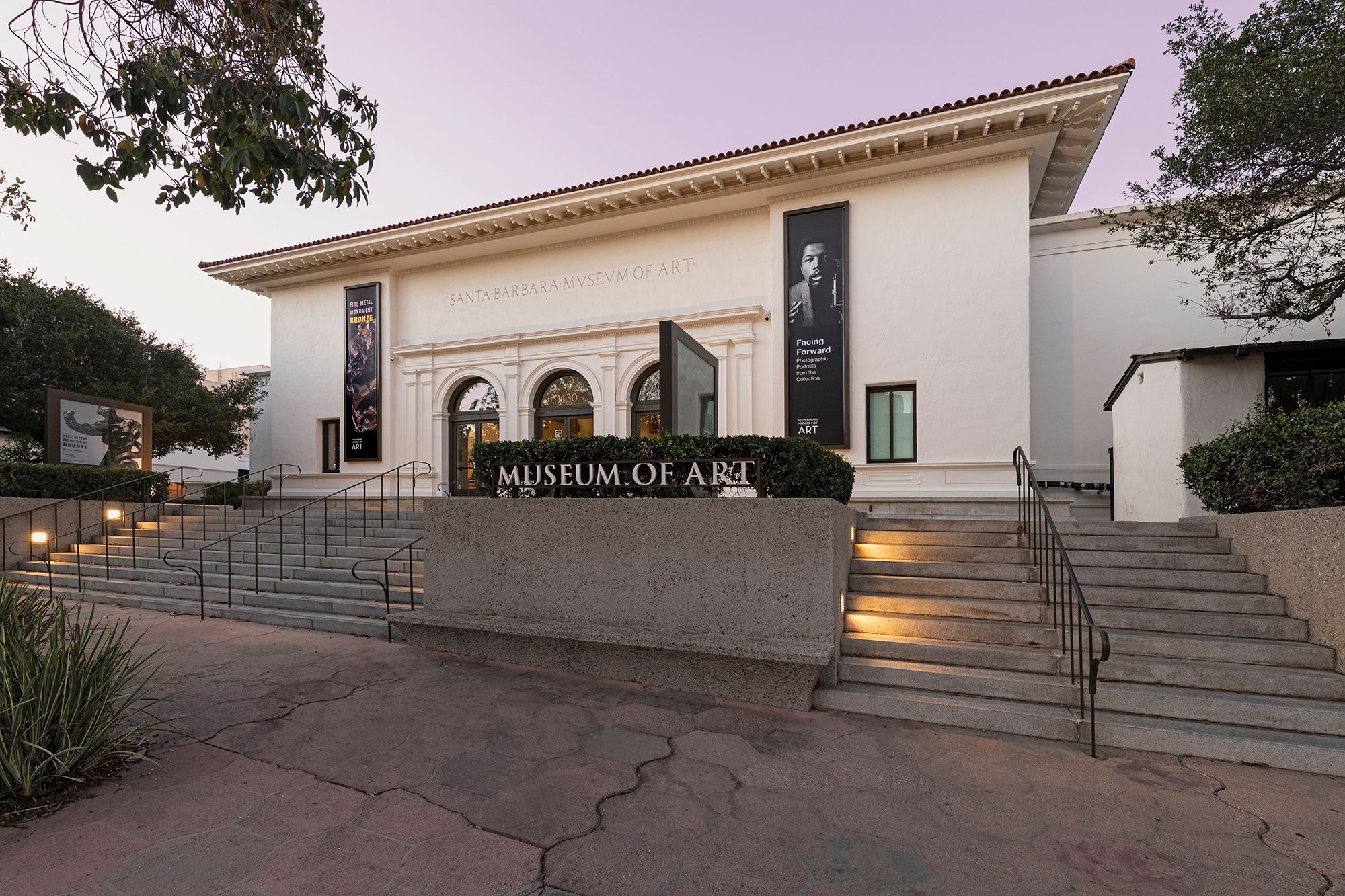 SBMA is the only showcase of global art between L.A. and San Francisco. It is also one of the few Southern California museums fronting a walkable urban street scene. The architects have reopened the building's original main entrance on State Street.

The entrance leads to the Ludington Court, a lobby and gallery. The name recognizes the influence of Wright S. Ludington (1900–1992), an investment banker's son who failed at being an artist but succeeded at the easier ambition of being a collector. He grew up with and inherited his father's collection of Asian art. A roaring 1920s grand tour of Europe instilled in him an appreciation for Mediterranean classicism and the European avant-garde. Ludington served as SBMA president and donated almost 400 objects. The best-known piece is the second-century Roman Landsdowne Hermes (from the same collection as the Getty Villa's Landsdowne Hercules).

The Hermes now stands six feet off the ground and has a unique seismic base that visitors are allowed to sit on. SBMA deputy director and chief curator Eik Kahng has installed the Ludington Court with a salon-style grouping of European and American paintings and added a few African masks and Pre-Columbian pots for company.

The paintings are really a kind of stagecraft doubling as open storage. SBMA's Old Masters are not at the level of the antiquities. There are works formerly assigned to Bosch, Memling, and Zurburan that are now understood to be by followers. Among the better pieces (and relatively easy to see) are a gold-ground St. Ursula by Agnolo Gaddi and Winslow Homer's Woman in Autumn Woods. 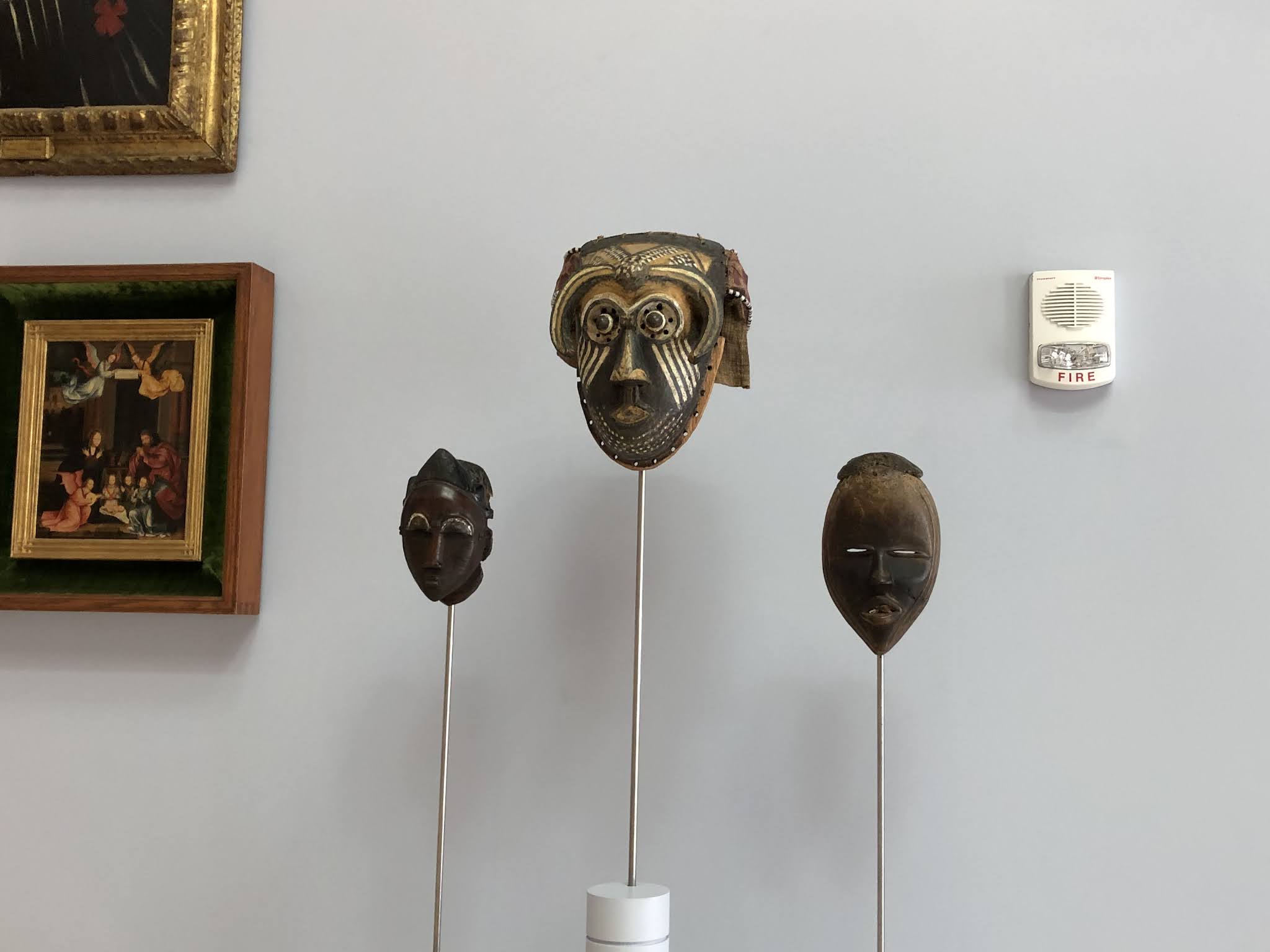 The Baule, Dan, and Kuba masks are probably early 20th century, so they're the latest works here. They remind visitors of the African foundations of our visual culture, but the effect is undercut by an unfortunately placed (and mask-like) fire alarm.

Feinberg says many visitors missed the museum's staircase and never realized the building had a second floor of galleries. That shouldn't be a problem now, with a new, more visible staircase. It leads to new galleries for contemporary art. Anchored by a Kapoor mirrored sculpture, the space is showing a Fred Eversley lens, a Kim Tschang-Yeui Waterdrops, and an apocalyptic skyscape by Chicago Imagist Roger Brown.

There's more contemporary art on the first floor. A space for temporary installations is showing the pandemic-delayed "In the Meanwhile… Recent Acquisitions of Contemporary Art." Many of the best pieces are by L.A. artists: Noah Davis, Jack Goldstein, Frederick Hammersley, Jim Isermann, and Ed Kienholz. They are joined by some interesting L.A. artists you hardly ever see in L.A. museums, such as Zach Harris and Raffi Kalenderian.

The large Noah Davis painting, visible from the Ludington Court, is from a series inspired by Richard Brautigan's psychedelic novella In Watermelon Sugar (1968).

The new photography space, on the second floor, temporarily incorporates a room that will be devoted to Indian art next year. It is now showing "Facing Forward: Photographic Portraits from the Collection," with pieces by Genevieve Gaignard, Trude Fleischmann, and Kwame Brathwaite.

Adjacent is "Inge Morath," foregrounding one of the first women photojournalists of Magnum Photos. Her most famous photo, involving a llama, was not urban serendipity. Morath followed around a woman who raised exotic animals to rent to New York TV and movie productions.

"Mediated Nature," in the gallery for new media, has video pieces by Diana Thater, Petra Cortright, and Wu Chi-Tsung.

To the left of the Ludington Court are galleries of Chinese and Japanese art, with multiple large and ancient sculptures surpassing anything to be seen in L.A. To the right is a combined showing of American and European art of the 19th and early 20th centuries that is most notable for American moderns.

A less predictable phase of the collection is British modern paintings and drawings. In a 2009 article, Apollo went so far as to declare SBMA "Britain by the Pacific". SBMA holds pieces by Wyndham Lewis, C.R.W. Nevinson, Stanley Spencer, Paul Nash, Graham Sutherland, and Bridget Riley. On view is Cecil Gordon Lawson's A Hymn to Spring (1871–1872) and William Orpen's The Black Cap (1928), a work defying interpretation.

SBMA's exhibition program swings into gear next February with "Through Vincent's Eyes: Van Gogh and His Sources." No wall projections, just original artworks by van Gogh and his idols.

Anonymous said…
Remind visitors of the "African foundations of our visual culture"?
Did I read that correctly?

Ok, "African foundations," based on what? Wait, I know. A misreading of a single painting, Les Demoiselles d’Avignon?

Picasso was NOT seeking the foundations of our visual culture.
He was manifesting his fear toward prostitutes.
LOL...
August 14, 2021 at 4:52 PM