Questioning History at the Wende Museum

Decommissioned monuments are to be the subject of a future MOCA exhibition. The Wende Museum of the Cold War is already there with its current exhibition "Questionable History." It opens with a toppled bronze monument of Vladimir Lenin from the Soviet Union. The statue (by Pavel Bondarenko, 1917-1992) is shown prone in a packing crate. Lenin was the subject of millions of sculptural representations, until he wasn't. The very existence of the Wende Museum is due to the fact that the Eastern Bloc didn't know what to do with its monuments to a problematic past. 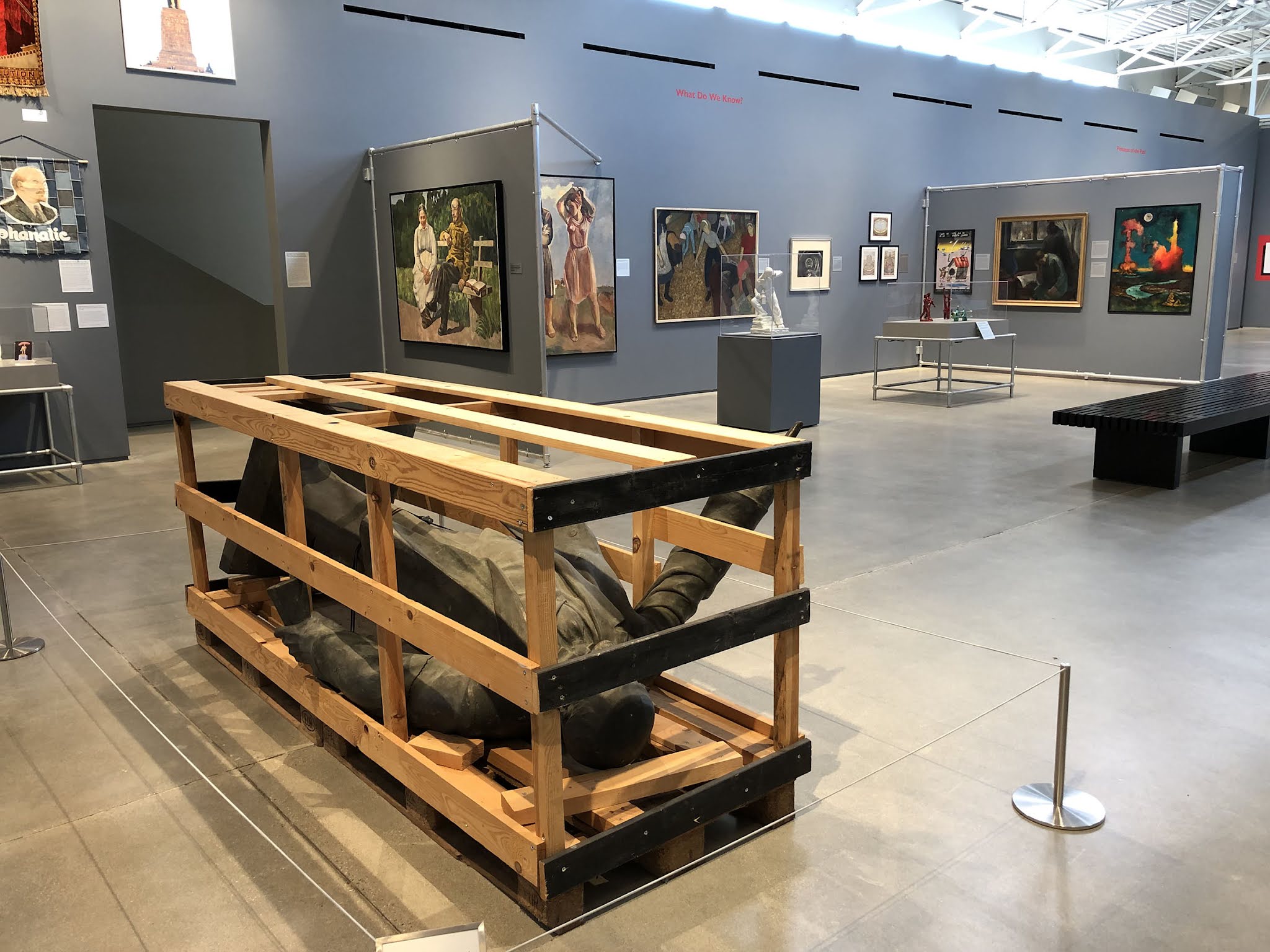 "Questionable History" brings together two versions of a popular painting showing a girl applying for membership in a Stalinist youth group. One painting has a bust of Joe Stalin gazing over the proceedings like a benign uncle. In the other copy, the bust has been painted out, presumably after Stalin's 1953 death and demotion to unperson. The irony is that it was Stalin's minions who pioneered the art of airbrushing disgraced officials from photographs.

Someone tried to scrape away the image of Nikita Khrushchev in a 1950s painting of him giving a speech at the Kremlin. This leaves Khrushchev as a transporter-malfunction wraith.

Under Stalin the arts were to embrace beskonfliktnost, a term translated as "conflictlessness." Soviet workers were to be shown as happy, with no doubts about their individual lives or the collective's glorious future. Some artists worked around the official directives. Alexi Solodovnikov's farmer is not so much joyous as an incel American Gothic. Though not a caricature, he was evidently cast to fit a strong, silent paradigm.
Socialist Realism had its discontents, both before and after the fall of the Soviet Union. A Hungarian artist, Laszlo Óvári, presents two fools on the hill watching the end of the world.
Among the show's surprises are three 1953 watercolors by Hungarian artist Antal Béla Ádám, part of a series titled Utopias After the War. The  utopia must be of the post-apocalyptic kind (the U.S. tested its first H-bomb in 1952). They are labeled as "Brazilia." That can't refer to Oscar Niemeyer's modernist capital Brasilia, developed starting in 1956. Béla Ádám's imagineering has more the quality of Achilles Rizzoli and Florine Stettheimer.

"Questionable History" presents an uncanny rhyme to our present predicament, in which social media are taking us into into strange new territories of propaganda. We are finding that free speech and free markets, the quintessential liberal and neoliberal values, do not guarantee the victory of truth over falsehood. As many of the artists of "Questionable History" asked, where do we go from here?

Anonymous said…
It's coming down to, "He may have been a SOB, but he was OUR SOB."

However, the overall history of a Joseph Stalin isn't exactly as pockmarked as the history of, say, a Thomas Jefferson. I believe his statue was recently removed from the city hall of New York. Which is a good thing.

Vladimir Lenin was also a supremacist.

LACMA's Michael Govan is definitely a supremacist. His Levitated Mass should be removed for cultural appropriation.
November 29, 2021 at 7:28 PM