COVID staffing shortages have prompted cancellation of Frieze L.A.'s planned outdoor sculpture exhibition in Beverly Hills. Among the casualties is what would have been the first public L.A. showing of Chris Burden's 40 Foot Stepped Skyscraper (2011). It's one of a group of Erector Set works including Hell Gate (owned jointly by MOCA and LACMA) and What My Dad Gave Me, the 65-foot skyscraper constructed in Rockefeller Plaza in 2008.

Burden entered the field of conceptual architecture in the early 1990s, when he was rebuilding his Topanga studio. He learned of a loophole in Los Angeles County building codes that allowed construction of a 400 sf, 35 ft-tall structure without a building permit. Burden sketched a four-story house with basement and roof deck, calling it Small Skyscraper (Quasi Legal Skyscraper) (1994).
A version of the Small Skyscraper was constructed of aluminum and wood and exhibited (on its side) at Los Angeles Contemporary Exhibitions in 2003. Armory Center for the Arts presented an upright version at One Colorado, Pasadena, in 2012. Burden created twin Small Skyscrapers, echoing the Twin Towers, for his 2013 retrospective at the New Museum, New York.
Starting in the late 1990s, Burden explored the use of Erector Sets as a building material. (The artist's architect father gave him an Erector Set as a child.) In 2008 Burden made an Erector Set New York skyscaper for the Public Art Fund. Initially Burden hoped to make What My Dad Gave Me 100 feet high. Engineering tests indicated that the toy girders might fail, limiting its height to 65 ft.
In 2008 Burden said of the Erector Set, "They're the tools we use to inculcate children into how to be adults, how to live in the world. But because they're for children, there is this potential in them that's never realized. I mean, children could have made [What My Dad Gave Me], theoretically, but they would never have enough time or parts." 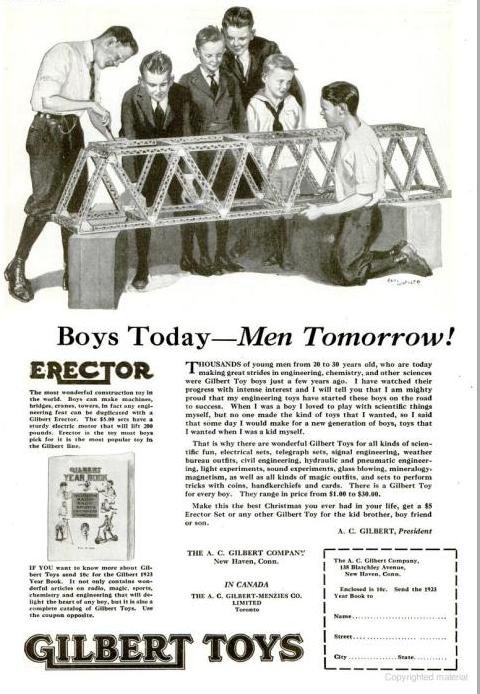