The second rotation of the Hammer's "A Decade of Acquisitions of Works on Paper" contains many notable works. But for textbook significance, it's hard to top Carolee Schneemann's Interior Scroll. Yes, this is the typewritten text that Schneemann pulled from her vagina and read aloud in an August 1975 performance in East Hampton, New York. That performance is now considered a landmark of Feminist art, performance art, and Fluxus. It is known mainly via editioned photos that are found in collections around the world. But the scroll at the Hammer, a gift of Eileen Harris Norton, appears to be the performed text itself. 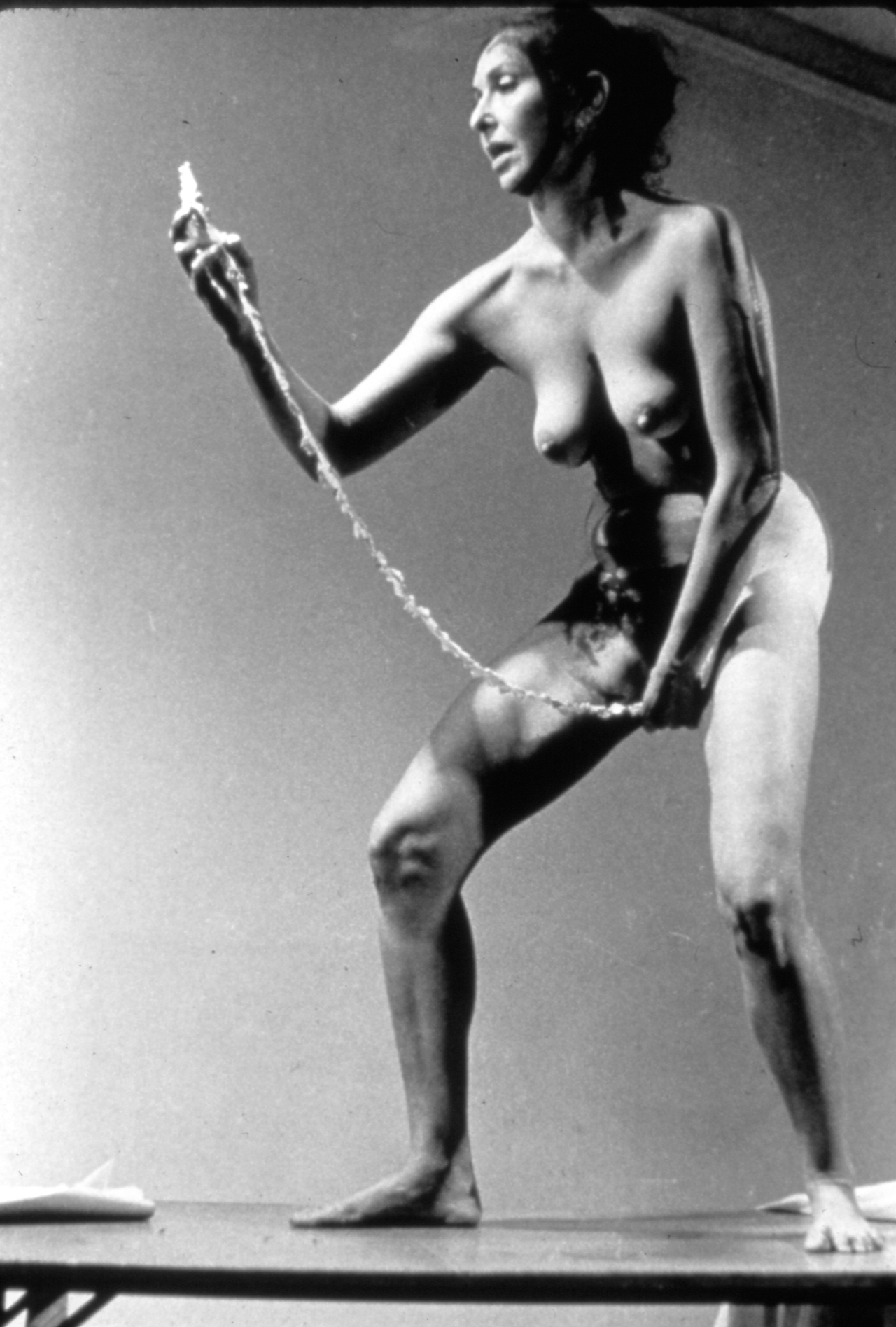 Scheemann credited the work's origin to a dream in which a small figure pulled a text from her vagina that said simply, "the knowledge." In 1991 she recalled: "I didn't want to pull a scroll out of my vagina and read it, but the culture's terror of my making overt what it wished to suppress fueled the image."
Scheemann however came to feel marginalized and even typecast by the disproportional attention accorded her sensational 1975 performance. In 2015 she told interviewer Quinn Moreland: "I think it has to be subtracted from the awareness of all the work I have done since. It's used against the work; it's used against the complexity of my processes; it's used to contain and stabilize a much richer and more complex body of work."
Schneemann repeated the Interior Scroll performance at the 1977 Telluride Film Festival (invited by Stan Brakhage, experimental filmmaker and namesake of "Stan" on South Park, created by two of his students). The Telluride performance used a new scroll with different typewritten text. The Schneemann Foundation  website gives the texts of both scrolls. The Harris Norton/Hammer text matches "Scroll 1," dated 1975. It's excerpted from Schneemann's 1975 artist's book Cézanne, She Was a Great Painter.
A quick online search found another apparently authentic Interior Scroll with a different text. As of Jan. 2021 this was in the collection of Sara M. and Michelle Vance Waddell and is dated "1974/1975," implying that it could have been prior to the Hammer version.
Evidently the Interior Scrolls are like the Ruby Slippers, and there are multiple versions of debatable significance. It makes sense that there would have been preliminary drafts and scrolls used for rehearsal. But as the 1975 East Hampton original, the scroll at the Hammer is a unique relic of Feminist art.
Email Post
Labels: Carolee Schneemann Hammer Museum

Ted Gallagher NYC said…
So interesting.
It's a wonder the paper survived. Was the text removed from the genitals all at once, then read, like a scroll? Or was it pulled, bit by bit, like a 6-ft kerchief pulled from the magician's sleeve?
I'm the last person on Earth to answer this mystery, as the last time I even conceived of a vagina was in December, 1958.
July 25, 2022 at 3:03 PM

Anonymous said…
The technical and creative skill evident in works like that are quite impressive. They give Thomas Kinkade a run for his money.
July 26, 2022 at 7:46 AM