This fall LACMA has a ground-breaking survey of Korean modernism and a comparably ambitious show of modern Scandinavian design. The objects in the latter—spanning a Volvo and a troll doll—are more familiar, in some cases nostalgic. But "Scandinavian Design in the United States, 1890-1980" brings together objects you might not have realized were related and casts them all in a new light. In the 1950s and 60s Scandinavian design was promoted to American consumers as practical, accessible, and cozy ("hygge" wasn't yet in the American lexicon), an alternative to the severe modernism of the Bauhaus. Jackie Kennedy wore Marimekko dresses, and designer chairs by Jens Risom and Hans Wegner were used for Cold War atomic facilities and the Kennedy-Nixon debates. Americans traveled to study in Scandinavia, and Norwegian, Swedish, and Finnish design established American outposts at Michigan's Cranbrook Academy and New York's United Nations' complex. There's a stronger L.A. connection than you might expect. Curators Bobbye Tigerman and Monica Obniski find pretexts to include a menu from Old Hollywood's Scandia restaurant and pieces by Greene and Greene, Charles and Ray Eames, and Sam Maloof—no Tom of Finland, however.

Though we associate Scandinavia with humane, sustainable design, the show's earliest object is an 1892 Krag-Jørgensen rifle that the U.S. Army bought as a more efficient killing machine. One of the latest objects is Victor Papanek's 1969 poster critiquing the boujee values of industrial design. 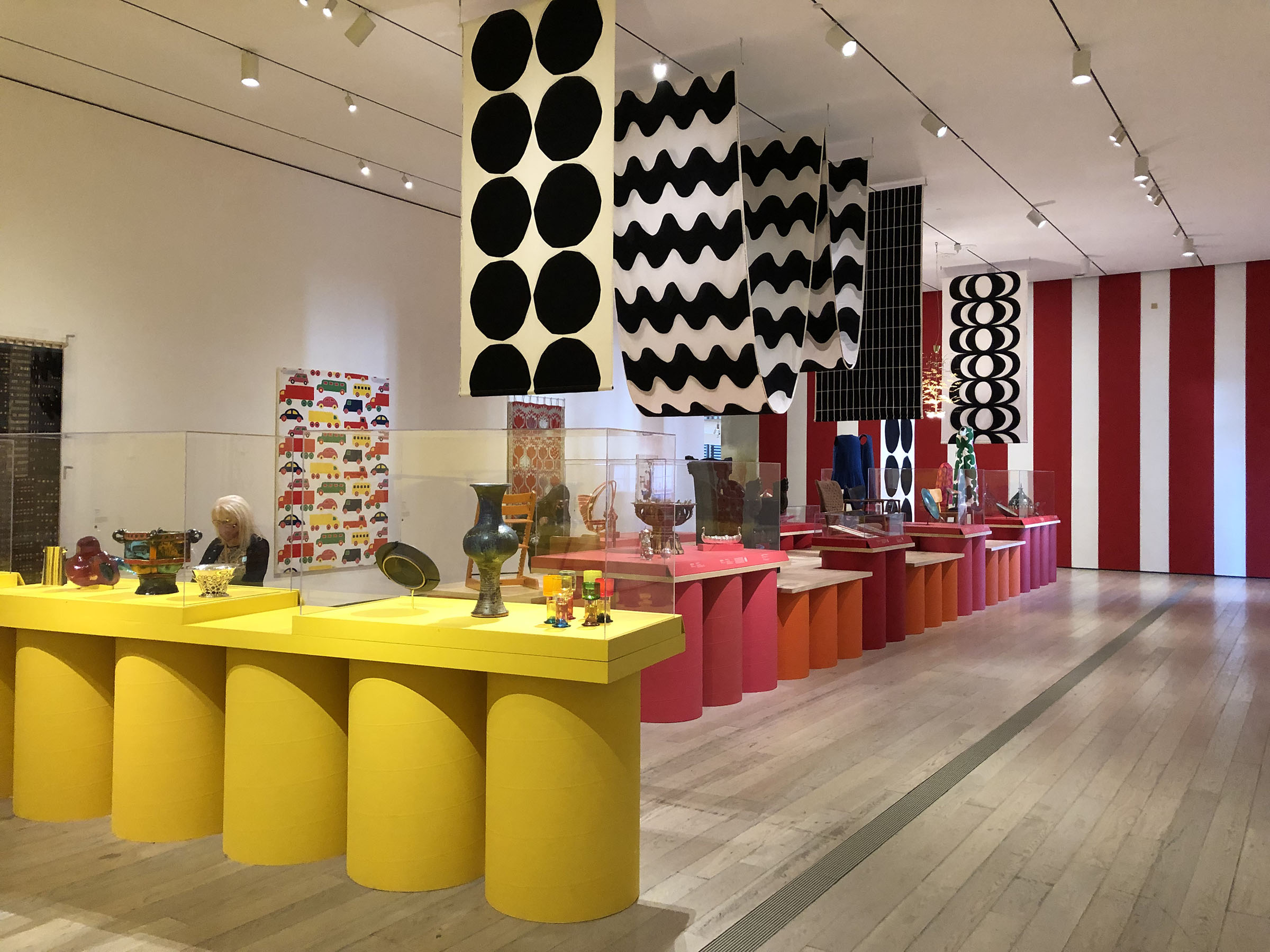 Cars shown in art museums are usually rolling sculptures, not Mommie and Daddie-mobiles. This Volvo Amazon emphasized family safety and was intended to resemble American cars. It was the first car to implement engineer Nils Bohlin's three-point seatbelt, now standard.
This is a historically significant troll doll that was carried for good luck on pilot Betty Miller's 1963 solo flight across the Pacific. Miller took the doll to the White House to receive a commendation from JFK.
The show also has an early LEGO block set, but this springy rocking horse looks more fun.Both dresses were worn by Jackie Kennedy.
Howard Smith was a Black American who felt he might have better opportunities in Finland. His printed textiles for Vallila became popular on both sides of the Atlantic. Some were sold on stretchers as affordable "paintings." Smith died in 2021.
Email Post
Labels: Alvar Aalto Jan Wilsgaard LACMA Milwaukee Art Museum Sven Markelius Victor Papanek

Anonymous said…
Exhibits like this one make it more disappointing to me that Peter Zumthor's new building will be physically/symbolically segregated from the Resnick, Broad and Japanese (Joe Price) buildings. The original Pereira/Hardy-Holzman-Pfeiffer structures were too, but not to as much a noticeable degree. Either way, any massive reconfiguration of the museum's campus should have addressed its historically hodge-podge layout.
November 28, 2022 at 12:27 PM