The Betty Ford Clinic in Art 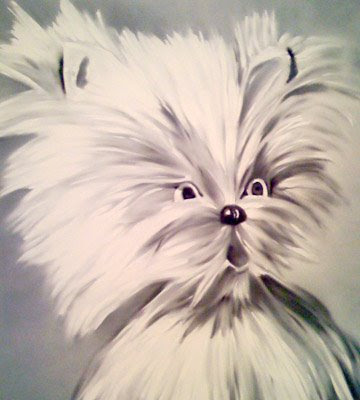 Martin Kippenberger built a career goofing off artists taken more seriously than he was (Anselm Kiefer and Gerhard Richter, to name two). He died John Belushi young-ish. One revelation of MOCA's media-straddling show is Kippenberger the painter. Painting after painting made me step back and say, wow. (Okay, there were a lot of paintings I didn't like. He's not running for Vermeer.)
The winsome dog face comes from a 1981 series whose title is translated, Dear Painter, Paint for Me. Kippenberger hired a commercial painter to create paintings after photographs he supplied. Baldessari was hiring sign painters (for text) as early as 1966, so no, it's not an especially original concept. I liked many of the results and didn't find them derivative. 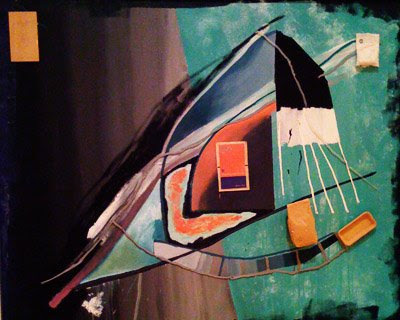 I was more impressed by some of Kippenberger's autograph paintings from a few years later. One glorious room shows what you might call ironic architecture painting. Think of Ruscha's Course of Empire, or Sheeler's industrial plants. Kippenberger's subjects include a Betty Ford Clinic (!), the prison were the Baader Meinhof gang was incarcerated (another quasi-mock-tribute to Richter), the Guggenheim Museum, and a sanitarium house by a lake (shown here). The genre of ironic architecture painting, such as it is, is predominately a precisionist one. In Kippenberger's hands, it's a mash-up of Kurt Schwitters and early abstract expressionism.
Email Post
Labels: Betty Ford Charles Sheeler Ed Ruscha Martin Kippenberger MOCA