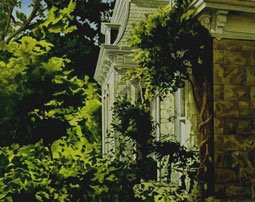 Alice Walton's billions haven't prevented the Huntington from going on a buying spree of American art. Like Walton, the Huntington has a museum to fill, in its case the expanded American galleries set to open next May on the San Marino campus. The most promising new acquisition is an unusual Charles Sheeler, Bird's Nest (1944). It's a second-story view of Sheeler's home in leafy Irvington-on-Hudson, New York. The Huntington press release proposes the organic forms of the trees as Sheeler's reaction to abstract expressionism. Maybe, but other paintings of the period and afterward show typical industrial subjects in familiar precisionist style. Either way, it's a good and memorable work, the first Sheeler painting in a Los Angeles public collection.
The Huntington also picked up a Reginald Marsh and a William Wetmore Story bust. The bust will play a supporting role in a collection of American neoclassical sculpture dominated by Harriet Hosmer's full-length Zenobia in Chains, acquired earlier this year. Rounding out the American acquisitions is Scraping a Deerskin by John George Brown. That name won't ring many bells, but the Met and Brooklyn Museums have paintings by Brown -- in their visible storage vaults. I'm not quite sure why the Huntington wanted one.
Email Post
Labels: Charles Sheeler Huntington San Marino