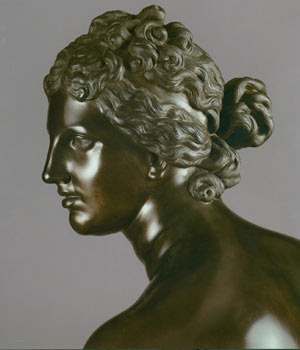 The Los Angeles Times is reporting that the Getty has just bought two life-size bronze casts of the Medici Venus and Dancing Faun, created in 1724 by Florentine sculptor Pietro Cipriani. This is sure to inspire debate for several reasons. The obvious one is that they're "reproductions," created from molds of the Uffizi originals. Now of course you can make the case that Cipriani has transformed his models, reimagining the ancient marbles as brand-new bronzes. The surface detailing is said to be something amazing, and they've been kept inside since the 18th century, so they're in prime condition. It would be easier to make this argument if Cipriani were a bit better known.
In a quarter century of high-end buying, life-size statues have eluded the Getty. It wasn't able to export Canova's The Three Graces, way back when. One index of art market inflation is that the pair of Ciprianis, whose export Britain also tried to block, were valued at $10 million, nearly what the Canova was.
Other museums take note of the Getty's buying. Are we edging back to the hall of casts idea -- as long as the casts are high-end "documents" of neoclassicism?
Email Post
Labels: Getty Museum Pietro Cipriani