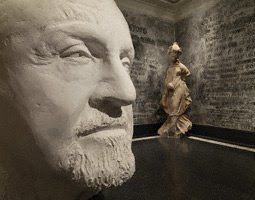 I can now report that Jim Dine's "Flowering Sheets" installation is every bit as icky as everyone has been saying. What's the point of something like this? The only apparent message is that Jim Dine is the timeless archetype of artistic and poetic genius. Well OK, Jim. My mother always said: that's for someone else to say.
Ego is the subtext of a more engaging Villa show, "The Getty Commodus: Roman Portraits and Modern Copies." Commodus once killed a hundred lions in a day, and could shoot the head off an ostrich with a bow and arrow. He was so handsome that Joaquin Phoenix played him in a movie. After numerous assassination attempts, Commodus was strangled in his bath by a wrestler named Narcissus. The Getty's portrait bust, bought from Castle Howard in 1992, was in such pristine condition that it was thought to date from the Renaissance or later. It's the most spectacular of several similar busts still at Castle Howard (and now on loan in Malibu). Detective work shows that all are ancient and immaculately preserved — with one qualification. Apparently, nefarious neoclassicists polished their surfaces to sheer perfection. The Getty estimates that up to about 2 millimeters of the marble surface of Commodus was planed off. The sculptural form is unchanged. The surface, however, is cleansed of stains and encrustations and looks, um, exactly the way it did in antiquity. Thank goodness no conservator would dare such an outrage today.
The re-attributed Commodus moves from Getty Center to Getty Villa and becomes (I imagine) the best new acquisition the Villa will see for a long, long time. It beats hands down the Getty's one antiquities buy of 2008, a clumsy, assembly-line sarcophagus of a vintage festival.
Email Post
Labels: Castle Howard Commodus Getty Villa Jim Dine Joaquin Phoenix