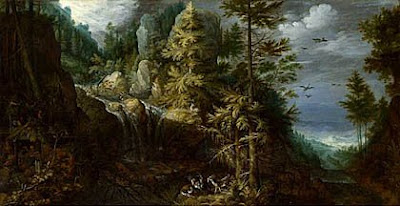 The Getty Museum has just announced the acquisition of Roelandt Savery's Wilderness with the Temptation of St. Anthony, a 1617 painting formerly on loan to the National Gallery, London, and an August Rodin wash drawing, Sphinx. The Savery fits in with the Getty's collection of works from the circle of Emperor Rudolf II of Prague; the Rodin drawing becomes the museum's first and only work by the famous sculptor.
It's anyone's guess what the market has done to the Getty endowment. The Savery acquisition has been in the works for nearly two years, according to the LA Times' Christopher Knight.
Email Post
Labels: Auguste Rodin Getty Museum Roelandt Savery