"Captured Emotions" at the Getty 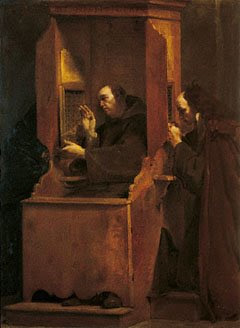 The Getty's current show of Bolognese baroque painting is a crazy mash-up of 27 masterpieces from the Dresden Gemäldegalerie Alte Meister and related works from Southern California collections. L.A. has a decent set of Domenichinos, Guido Renis, and Guercinos. This reflects the fact that practically all the "better" artists were taken by the time that Los Angeles began collecting seriously. For the record, the show didn't convince me that Carracci and Co. were as good as anyone else painting at the time. Against all expectations, though, the L.A. paintings stack up against Dresden's. Most of the Dresden works had been acquired prior to 1800; most of the L.A. pieces were bought after 1980. L.A. has no Annibale Carracci, nor anything of the jaw-dropping scale of that artist's 1588 altarpiece, now dominating the first room of the Getty exhibition pavillion. Otherwise, I found myself liking familiar LACMA and Getty paintings as much as the loans. Annibale's St. Sebastian didn't impress (and it looked like someone had shot a few arrows at the canvas). Fame is lame.
• One of the local favorites isn't here: Guercino's Portrait of the Aldrovandi Dog. Improbably enough, the Dog is Frick Collection bound, for an installation of five Norton Simon Museum paintings.
• The sleeper highlight is an amazing room containing the Seven Sacraments of Giuseppe Maria Crespi. I like them because they're creepy and dark and brown. For Confession (pictured) Crespi hauled a confession booth into his studio. Did he paint only at night? Am I the only one who doesn't see much of a connection to a Carracci or Bolognese aesthetic? Crespi reminds me of Magnasco — or Goya — or the really freaky Neapolitans like François de Nome.
Email Post
Labels: Annibale Carracci Frick Collection Getty Museum Giuseppe Maria Crespi Guercino Norton Simon Museum