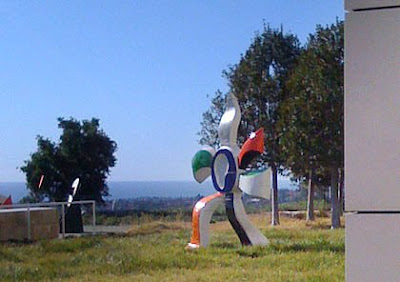 The Getty Museum has quietly moved Fernand Léger's "Walking Flower" from Robert Irwin's Central Garden to a far less conspicuous site behind the Getty Research Institute. The glazed ceramic sculpture is generally acknowledged as one of the most atrocious pieces in Fran and Ray Stark's gift of 28 modern sculptures. As Irwin diplomatically put it (in a Los Angeles Times interview on the occasion of his garden's tenth anniversary),

If you start doing things in the public domain, it has to live with change. It's inevitable. It's going to happen, so it has to be strong enough to have enough character, enough backbone in a way, that you stick a piece of sculpture in it, it didn't kill the garden. [To Irwin's dismay, a 1950s Leger sculpture was placed on the garden's plaza.] It was inappropriate and invasive, but the garden is strong. 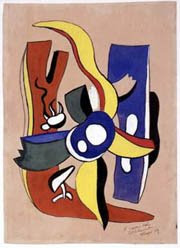 Why is the sculpture so bad? Probably for the same reason the Stark Magritte, Delusions of Grandeur, is. It's the result of a painter trying to make a 3D version of a painting. The Léger, designed in 1952-1953 and fabricated thirty years later (long after the artist's death), revisits a flower/starfish motif that Léger had used in two-dimensional works of the 1930s, such as Starfish, a gouache drawing in the Hammer Museum.

The Hammer Starfish levitates on one point, something hardly possible with a ponderous sculpture. When Léger translated his flower/starfish to 3D, the end result became a lot more cutesy-anthropomorphic. There's a trippy, Mr. Natural or H.R. Pufnstuff vibe (which actually makes it sound more interesting than it is). I guess it's the way he needed two petals to support the thing. One had to go in front of the other, and they needed pudgy, Gumby feet where they touched the ground. The spirit of Léger's idea may be better realized by another Stark sculpture at the Getty, Joel Shapiro's untitled bronze of 1982-1985. The Shapiro does balance a stick figure on one leg.

In its new home, "Walking Flower" is close to a plaza with painted steel works by Alexander Calder (arguably a better companion than Irwin's garden was). From many sightlines, Richard Meier's Research Institute does a commendable job of blocking all view of the "Flower." From other perspectives, it looks like the Léger might keep on truckin' right into the Pacific, in an honorable act of self-deaccessioning.
Email Post
Labels: Fernand Leger Getty Museum Gumby H.R. Pufnstuff Hammer Museum Joel Shapiro Mr. Natural Robert Irwin