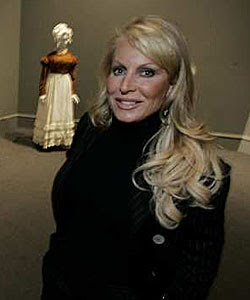 LACMA topped off 2008 by acquiring a 550-piece collection of European costumes and accessories, mostly from the 18th and 19th centuries. The Los Angeles Times tells the story: It was assembled over three years by dealers Martin Kamer and Wolfgang Ruf to offer to a museum. LACMA bought it with support of assorted donors, most importantly Suzanne Saperstein. Saperstein knows the material. A 2002 Vanity Fair profile rated her "probably the world's No. 1 consumer of haute couture." Saperstein (pictured) is a former competitive skier who is rumored to have copped billions in her divorce from David Saperstein, who pioneered live traffic reporting for radio. Suzanne, a regular feature at Paris shows, lives with a hot new boyfriend in a 45,000-square-foot replica of Versailles (in Holmby Hills). LACMA's new collection is set to inaugurate the Resnick Pavilion in fall 2010.
Email Post
Labels: LACMA Suzanne Saperstein