Robert Dowd at the Weisman 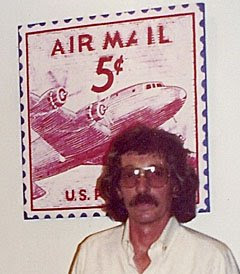 The first exhibition of pop art is often said to be Walter Hopps' 1962 "New Paintings of Common Objects" at the Pasadena Art Museum. It assembled bleeding-edge works by Andy Warhol, Ed Ruscha, Joe Goode, Wayne Thiebaud, Jim Dine, Roy Lichtenstein -- and one Robert Dowd. After the show, Lichtenstein tried to convince Leo Castelli to take on Dowd. Castelli passed. "Robert Dowd: Pop Art Money" at Pepperdine University's Weisman Museum is not about to convince anybody that Castelli made the wrong call. It does reveal Dowd as creator of some of the handsomer works of hand-painted pop, an artist who landed on the cusp of history complete with a signature gimmick. What put the kibosh on Dowd's brilliant career? Would you believe the federal government? 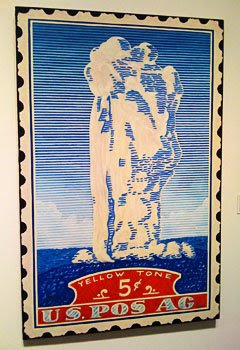 Inspired by Jasper Johns' targets, Michigan-born Dowd (1936-1996) began painting stop signs around 1958. He moved to San Francisco in 1960, and Los Angeles the following year. At this point Dowd was painting deadpan replicas of postage stamps and U.S currency. The chronology is interesting: Warhol also painted stamps and dollar bills in the early 1960s and would have been exposed to Dowd's work in Hopps' 1962 show. Not that there's anything wrong with that. Everybody was stealing from everybody, nobody more than Dowd. He had about ten bad ideas for every good one, and when he was short on ideas, he stole. The Pepperdine show includes painful "homages" to Johns and Lichtenstein. You want a rip-off? Try Dowd's burning Treasury Building, painted a few years after Ruscha's blazing buildings. (I'll confess I kind of like Dowd's version.)

In the New York art world, Dowd couldn't get arrested. In Los Angeles, it was another story. In 1963, Secret Service agents came to Dowd's studio and escorted him to the the Federal Building in downtown Los Angeles. According to Dowd,

"They were attempting to intimidate me with all these threats. It was really a matter of them attempting to tell me that if I continued to paint money, that I would be arrested for counterfeiting, that I was breaking the law. They did have some work of mine that they had confiscated as contraband. They told me they were going to museums and collectors and confiscate all the paintings out of the collections."

This recapitulates the plight of nineteenth-century trompe l'oeil masters Harnett and Haberle, both accused of counterfeiting. H & H were using the full power of oil on canvas to simulate currency at life size. Dowd's works were painterly, ten times the size of a real bill or more, and often cropped. No one was going to pass off a Dowd painting at the 7-11. I guess this proves Dowd's thesis, that the mere idea of money provokes emotion. (Johns too was accused of desecrating Old Glory.)

According to the extensive Wikipedia entry on Dowd, "On one occasion a year's work of paintings, which he had in storage for an up-coming exhibition[,] he found destroyed, ripped to shreds... Sometimes paintings in storage and in his studio would just disappear. He often wondered if the FBI had them in their own collection."

For whatever reason, Dowd's career never caught fire. He moved to New York: still nothing. In the 1970s Dowd fell under the baleful (for him) influence of Rene Magritte. But the Magritte period is solid gold compared to what came next. After reading The Tao of Physics, Dowd began doing paintings inspired by quantum physics. OMG. If you want to avoid them, and you should want to avoid them, don't take the stairs to the Weisman's second level. Friendly piece of advice: See the first floor, then just get out of the building.

That tactic won't spare you from seeing some cutesy currency paintings with portraits of dead artists in lieu of dead presidents. (There's a specimen on the Weisman web site, as if they expect it to be the sort of thing their audience will like.) This brings up a complaint I've had with several Weisman Museum shows built around the worthy purpose of rehabilitating a neglected So. Cal. artist's reputation. They refuse to edit. What's the point of reminding the world that Dowd painted cheesy Magrittes? I would have much preferred a focused show, 1958 to mid 1960s-- the stop signs, postage stamps, the best of the early currency.

By the way, someone should do a Picasso v. Magritte show for early pop: a year-by-year chronology of who did what first.