Cute Overload in the Japanese Pavilion

LACMA has lately acquired several Japanese paintings that fall into that elusive category of great art that speaks to people who know nothing about art. Foremost among them is Mori Sosen's Six Animals, a gift of Camila Chandler Frost (above, large detail). A toothy boar anchors an S-shaped composition of a bat, a fox, an ox, and two rabbits. It's as cute as anything by the Murakami, or Hello Kitty, corporate combines. Formatted to a street banner, it's got to be the museum's next signature image. According to the LACMA gallery text,

Would you believe this isn't the only great Mori Sosen painting of a porcine donated by Ms. Frost? In 2009 she gave the museum Boar, also on view. Last month the Collectors Committee added a wryly humorous Tiger Drinking from a Raging River (about 1640) by Kano Sansetsu. It's the only signed work outside of Japan by this legendary and Giorgione-mysterious painter. (That said, one of America's best-known screen paintings, the unsigned Old Plum in the Metropolitan Museum, is attributed to the artist.) Sansetsu wouldn't have seen a living tiger. He reverse-engineered the flat evidence of Chinese paintings and preserved tiger skins. 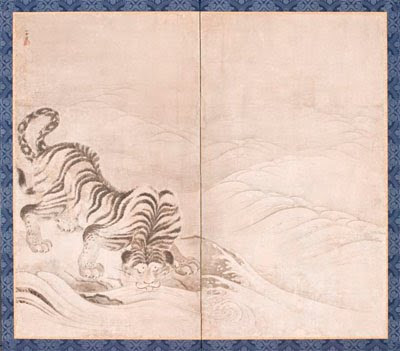 David and Margaret Barry have promised to the museum a spectacular pair of screens, Birds and Flowers, by the little-known Imanaku Soyu (1886-1959). Dating from about 1920, Birds and Flowers looks like nothing else in the Japanese Pavilion. It loosely recalls the decorative, mural-scale paintings created by Vuillard and Bonnard. There is a similar delight in juicy-jungle greens, lilac, and scarlet. Less abstract than the Frenchmen's work, Birds and Flowers is more aggressively allover. 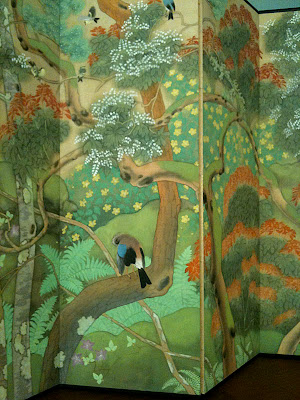 You can't see it in the photo below, but in the right slant of light, the pale dots in the trees light up like fireflies. Your folks from out of town will love that. 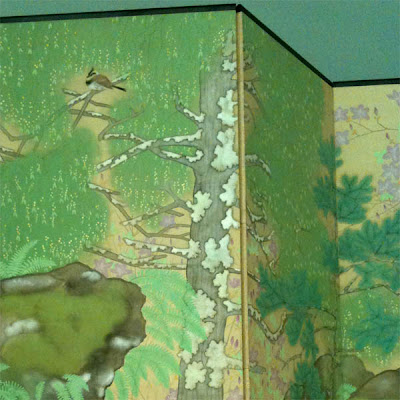 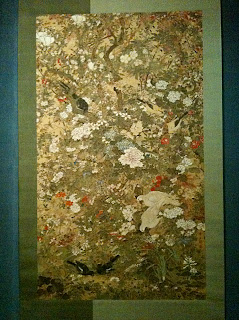 Another Frost gift is Ueno Setsugaku's Myriad Birds, Insects, and Flowers (c. 1850). It was discovered over the fireplace in a British treasure house, framed like any old old master painting. In its new life at LACMA, it inhabits an "adventuresome" scroll in two tones of green.
Email Post
Labels: Imanaka Soyu Kano Sansetsu LACMA Mori Sosen Ueno Setsugaku

Donald Frazell said…
Niiiiiice. Now if they would only paint the Japanese Pavilion off white from its sickly puke green construction foam color. Weird building, great art, horrible color, and while at it, paint the whole damn museum. Beige is neither cool, nor vital. the Parthenon was painted ya know. LACMA could be so much more with just a few hundred gallons of that ancient technology, paint. If they only had some creative people working there instead of academic data wonk careerist flunkies.
art collegia delenda est
May 18, 2010 at 8:01 PM

Anonymous said…
I forwarded this entry to LACMA's head curator of Japanese Art, Robert Singer, who has been acquired many beautiful artworks for the Pavilion over the years. He was pleasantly surprised that the blogosphere has noticed and complimented his latest acquisitions.
May 19, 2010 at 1:15 PM