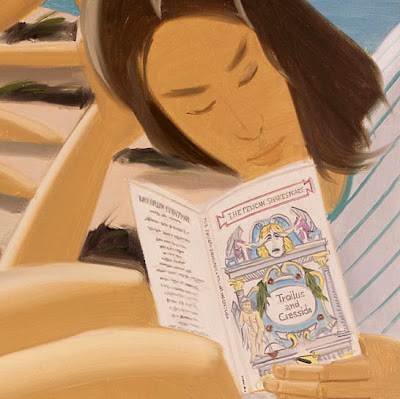 LACMA's new Alex Katz, Round Hill (small detail above), features a literary product placement: a copy of Troilus and Cressida, specifically the Pelican Shakespeare paperback. It falls into the small category of paintings that incorporate books as prominent subject matter. As Sontag said, interpretation is the revenge of the intellect upon art. Paintings of books have always intrigued art's interpreters—more than anyone else—for these works appear to promise that a mere text can unlock the mystery of art. 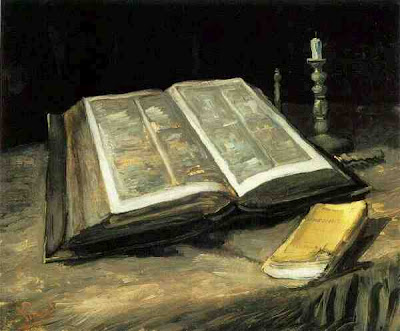 Vincent van Gogh may be the best-known painter of books to today's audiences. He slipped contemporary novels into the foreground of many of his floral still-lifes. A unique example of an all-book subject is Still Life with Bible (1885) in the van Gogh Museum, Amsterdam. Generations of critics have held it up as an emblem of the artist's conflict between old-time religion and modern secularism. The small yellow softcover is Emile Zola's La Joie de Vivre. Hollywood would adapt/mangle that conflict into Lust for Life (1956). 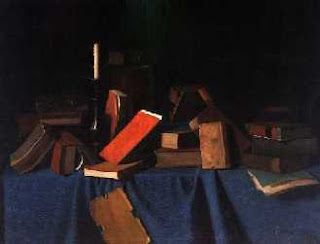 Not so long after Van Gogh, the American John Frederick Peto invented a different sort of book painting in which he effaced titles and all other distinguishing marks from books. (Left, In the Library, Timken Museum, San Diego.) Peto presented books as victims of chance, decay, and entropy. In the twentieth century, text became a ubiquitous element of painting, from cubism to pop to postmoderism. But it was mostly low-brow, pop-culture texts, from signs and ads and movies, that drove the century's art. 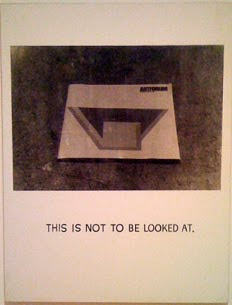 John Baldessari's 1968 photo-painting of Artforum magazine (This is Not to Be Looked At, MOCA) is the polar opposite of Van Gogh's earnest homages. In this respect, Peto looks more contemporary: He Photoshop'ed out book titles the way that contemporary practitioners coin art by erasing texts from magazine ads and TV commercials.
What did Alex Katz intend by painting Troilus and Cressida into his 1977 beach idyll? The play is a revisionist account of the Trojan War, the oldest tale in the Western tradition. When Katz painted Round Hill, the educated viewer would have seen the book as a signifier of advanced taste, and not just because the play was relatively little-known. A decade before Katz's painting Joyce Carol Oates wrote,

"Troilus and Cressida, that most vexing and ambiguous of Shakespeare's plays, strikes the modern reader as a contemporary document—its investigation of numerous infidelities, its criticism of tragic pretensions, above all, its implicit debate between what is essential in human life and what is only existential are themes of the twentieth century.… Shakespeare shows in this darkest and least satisfying of his tragedies the modern, ironic, nihilistic spectacle of man diminished, not exalted.… This is tragedy of a special sort—the 'tragedy' the basis of which is the impossibility of conventional tragedy."

In recent years, productions of Troilus and Cressida have proliferated and have sometimes drawn sell-out crowds. What's interesting is that Katz was ahead of the literary curve, or at least on top of it. Van Gogh wasn't, and practically no once since would have even cared to be.
Email Post
Labels: Alex Katz Artforum John Baldessari John Frederick Peto Joyce Carol Oates LACMA MOCA Susan Sontag Timken Museum Vincent van Gogh William Shakespeare