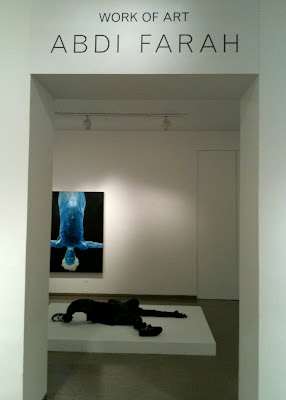 Followers of Bravo TV's Work of Art may have noted that the Brooklyn Museum's curators have kept the reality show at arm's length. The series' grand prize was of course a one-artist show, and Abdi Farah won it. His exhibition opened this weekend in Brooklyn. The art is, uh, about what you saw on TV. The surprise is that the museum's curators are now embracing the zeitgeist. Two large text panels flanking the entrance are credited to the museum's Charles Desmarais and Eugenie Tsai. The copy has the unnaturally cheery affect of a political prisoner forced to write upbeat letters to home. "Desmarais"—if it is Desmarais—writes,

"Though it may seem an unconventional presentation, contests such as Work of Art are not unfamiliar to art museums. In nineteenth-century France, the principal route to prominence for an artist was to enter his or (rarely) her work in a competition held every year or two at the Louvre… [Goes on to argue that the Paris Salon = reality TV.] Work of Art is a direct descendant of the juried-exhibition tradition… [Goes on to name check the TV show jurors, known to anyone who's taken the subway to Brooklyn for this goddamn thing.]

"The world changes constantly, and art changes with it, as do the ways audiences engage with art. Reality television—in this case, the on-camera interactions between artists, critics, and dealers—offers a dynamic new way for viewers to encounter works of art."

You might have feared/hoped that the winning artist would be as profoundly embarrassing as was Work of Art itself. Not really. Farah's work may be pegged as "art school," serious and fashionably derivative. He's 22, OK? The floor sculptures, of fallen youths wearing tennis shoes, vaguely recall Eric Fischl's Tumbling Woman. It could have been so much worse, and it's not. 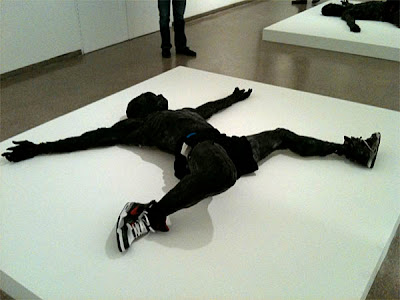 Work of Art has occasioned "end of civilization" hyperbole. The fact is that artists less seasoned than Farah land museum shows every year, for reasons less public but no less absurd. Brooklyn's Farah show is more defensible than LACMA's 2002 exhibition of Farrah Fawcett (and Keith Edmier, also more-or-less inspired by a TV show).
Farah, Farrah, whatever. The Brooklyn Museum's presentation of contemporary art has never been stronger. Across the hall is a survey of late Warhol. Drawn from Pittsburgh's Andy Warhol Museum and the Baltimore Museum of Art, it's far from definitive, but it makes a compelling case for the post-1968 Warhol that not many love. On the floor below is Kiki Smith, plus a newish presentation of contemporary art from the permanent collection. It's impressive and strong in Brooklyn artists, artists of color, and women artists. A great Francis Bacon hangs amongst artists who are—for now—less famous than Abdi Farah is.
In a saner world, a single Farah might have been slipped seamlessly into this survey. Farah's fallen figures can be read as the road kill to the art world's up-and-down fame game—as a sardonic denouement to another Brooklyn work, Kehinde Wiley's 2003 ceiling painting, Go. 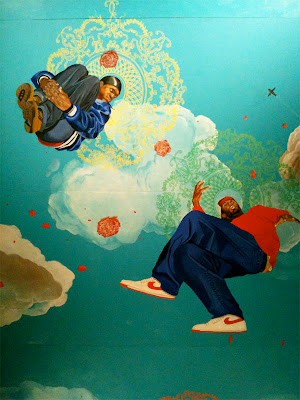