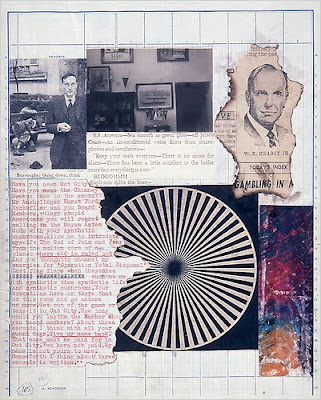 New York's New Museum of Contemporary Art is doing a show on Brion Gysin, the artist who's best known for his collaborations with Beat writer William S. Burroughs. An entire room is given over to a loan from LACMA, The Third Mind. This was one of the most unusual acquisitions of legendary photography curator Robert Sobieszek. An avid Burroughs fan, Sobieszek managed to buy it even though it barely qualifies as photography. It consists of collages for an illustrated book that Burroughs and Gysin intended to publish. The "photos," such as they are, are tiny snapshots or pictures clipped out of newspapers. When The Third Mind was shown at LACMA, in Sobieszek's 1996 "Ports of Entry: William S. Burroughs and the Arts," the spotlight was on Burroughs' involvement with the visual arts. The New Museum show reveals Gysin as an interesting artist in his own right — and most likely the primary creator of the collages in The Third Mind.
Why isn't Gysin better known? At age 19, he got a chance to appear in a Surrealist group show in Paris. Gysin's works were to be hung alongside those of de Chirico, Duchamp, Man Ray, Tanguy, Picasso, Dalí, Ernst, and Magritte. Not a bad debut, right? The day before the opening Andre Breton decided he didn't like Gysin's art. He demanded that the works be taken down. Gysin's career never recovered.
Ironically, Gysin is best known for his influence on literature. It was he who invented the cut-up technique that Burroughs used to scramble his prose. Gysin's most famous aphorism is now common wisdom: "Writing is fifty years behind painting," he said. But that may be his second-most famous text. Gysin also submitted the recipe for what's come to be called Alice B. Toklas' brownies.
Email Post
Labels: Brion Gysin LACMA New Museum of Contemporary Art Robert Sobieszek William S. Burroughs