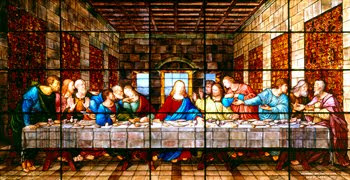 Look up "kitsch" in the dictionary — the Grove Dictionary of Art — and you'll find that Los Angeles is mentioned.

"Straightforward printed reproductions of famous paintings are not in themselves kitsch, but objects that adapt high art images from one medium to another are paradigmatically kitsch, for instance plastic or fibreglass sculptural renderings of Dürer’s Study of Praying Hands, Leonardo’s Last Supper (1495–7; Milan, S Maria della Grazie) executed in tapestry, or stained glass, such as that at the Forest Lawn Memorial Cemetery in Los Angeles…"

OK, the Forest Lawn Last Supper is as good an example of kitsch as you could ask for. It's the work of twentieth-century stained glass artisan Rosa Caselli Moretti (her surname ironically evocative of Giovanni Morelli, founder of connoisseurship). But no, Moretti's Last Supper isn't in Los Angeles. It's in Glendale. Same difference? Well it's hard to imagine the Grove saying the "Monuments of Passaic" are in New York.
Also in Glendale is Ernesto Gazzeri's unforgettably titled sculpture, The Mystery of Life, a Forest Lawn "original." To the art world, neither Gazzeri nor his sculpture are nearly so well known as Garry Winogrand's 1964 photograph of the marble group. The usual title of the Winogrand photo is Forest Lawn Cemetery, Los Angeles. There is unquestionably a treasure trove of kitsch in Los Angeles, and there's even another kitsch-packed branch of Forest Lawn within city limits (in Hollywood Hills)… but maybe it's time to give Glendale its due? 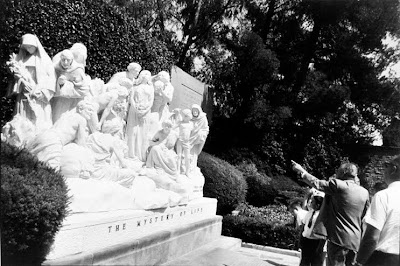 Donald Frazell said…
How about pretty much everything in MoCA and BCAM. Mental kitsch is just as bad as physical tackiness, and what could be more played out than thousands of eyelashes sewed together into a stoll, michael jackson in porcelain, and pretty much all word based silliness posing as art, when truly just isolated, unrelated segments of real ideas presented as deep and clever thoughts?

Konceptual Kitsch is all the rage in decadent land, and the mind is a terrible thing to waste, or never ever develop. What could be tackier than presenting jesters as prophets? Isn't that plastic versions of saints?
August 10, 2010 at 7:19 PM