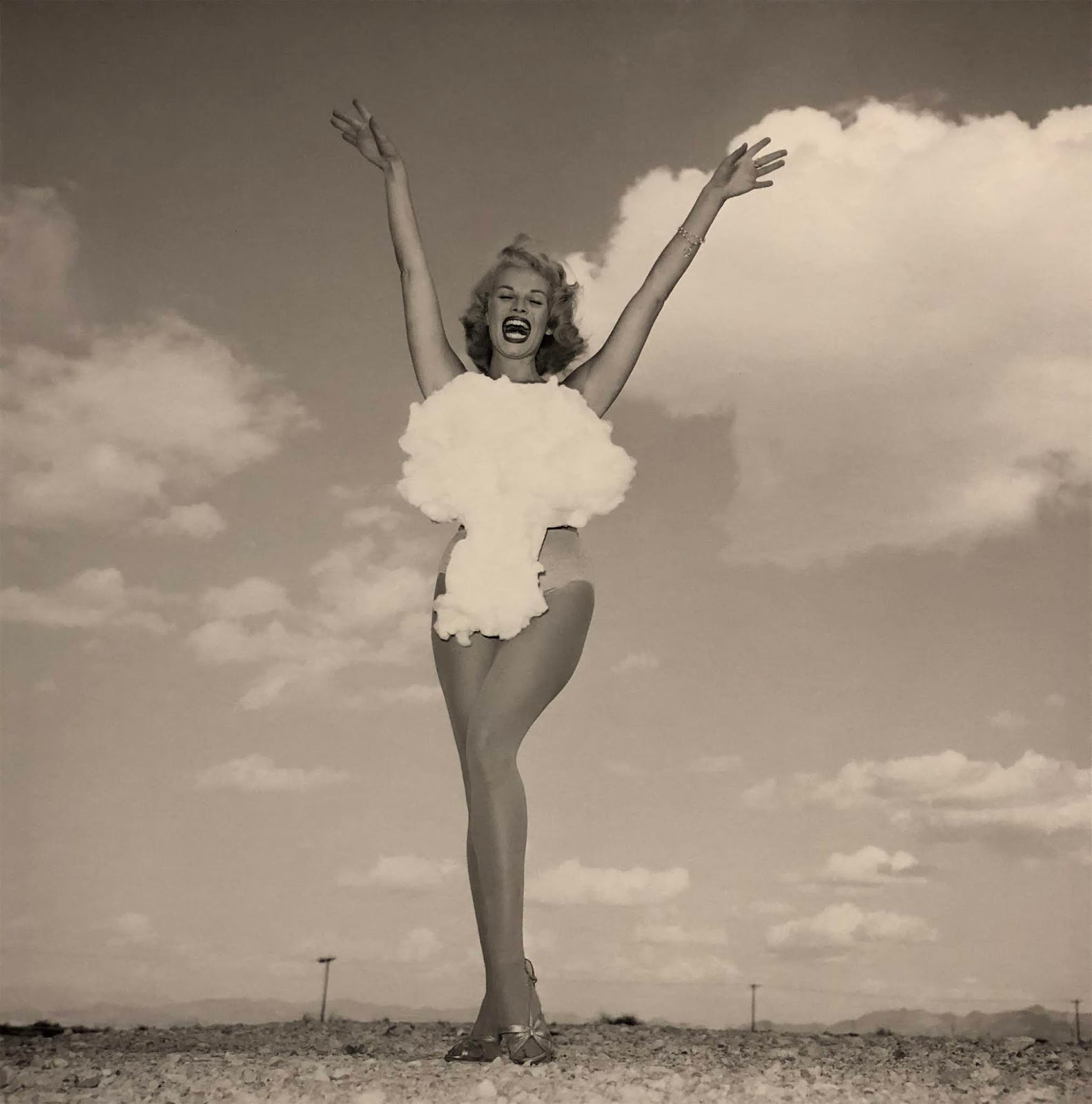 The Wende Museum's "War of Nerves: Psychological Landscapes of the Cold War" explores the golden age of psychological warfare, brainwashing, and propaganda; of The Manchurian Candidate and the CIA's wonder drug, LSD; of science-based attempts to influence impressionable youth and recruit useful idiots; of Madison Avenue efforts to make the atomic age stress-free, modern, and fun. (At top, Don English's photo of the 1957 winner of the Miss Atomic Bomb competition, a gimmick concocted to reassure Las Vegas tourists that nuclear tests are nothing to worry about.) 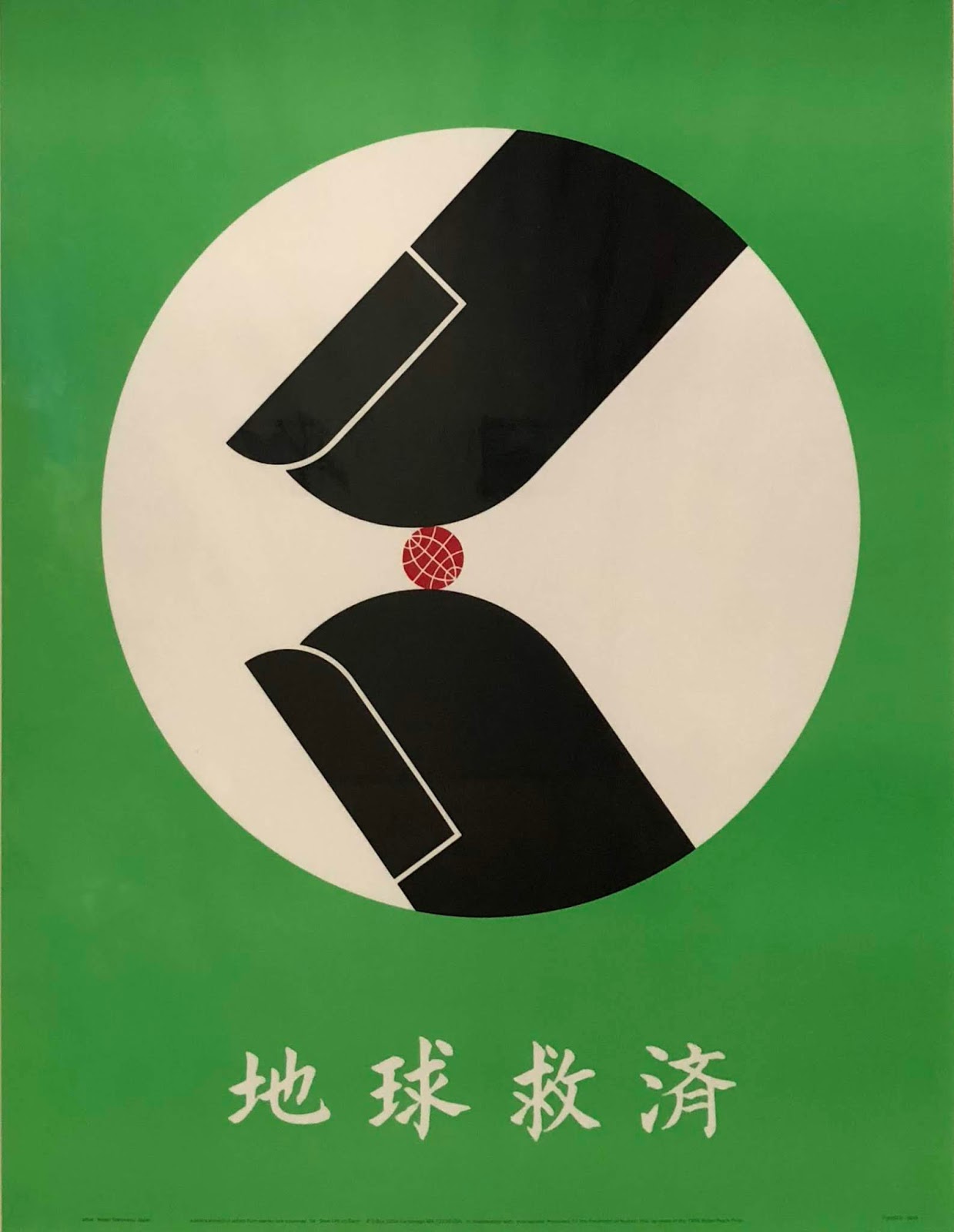 There are intriguing objects aplenty, ranging from an echt-modern Hideo Toyomasu poster, Save Life on Earth (1980s, top of post) to a rather less subtle collector's plate on basically the same theme. The chronology ranges well into the Reagan era. (Make that Reagan eras. Eight years before The Manchurian Candidate, actor Reagan starred in Hollywood's first Korean War brainwashing film, Prisoner of War, 1954.)
A tent-like film gallery shows clips of propaganda films warning against the evils of, uh, propaganda. Some are dead-serious and unintentionally funny imaginings of American family life after the Communists take over.  Less predictable is Vladimir Tarasov's Shooting Range (1979), an animation in the Peter Max/Yellow Submarine mode. A young couple take a job as living targets in a capitalist meanie's shooting gallery. Tarasov's Pop-influenced eye candy features Coca-Cola  and brazen appropriations of Disney intellectual property. Like the Western Pop movement, Tarasov celebrates consumerism even as he condemns it.
The smaller exhibition, "Red Shoes: Love, Politics, and Dance During the Cold War," concerns ballet, an art in which the Soviet Union had undeniable supremacy. In the name of cultural diplomacy both the USSR and the US toured their ballet companies internationally, presumably to demonstrate the superiority of their respective systems. Actually America's strongest hand was its undocumented immigrants, a.k.a. defectors:  Nureyev, Baryshnikov, and many others.

"Red Shoes" has more of an L.A. angle than you might expect, with surprise appearances by Armand Hammer and Zev Yaroslavsky.
The Wende Museum has always raised the question, how much can you do with the Cold War? This is third cycle of exhibitions since the Wende occupied the greatly expanded space in Culver City's former Armory. There's been no drop-off in interest and originality of themes; nor a sense that it's all getting repetitious, dated, or irrelevant. In fact, it's hard not to go through "War of Nerves" without thinking of Fox News, "fake news," and the many way we willingly brainwash ourselves. In some ways the Cold Wars' imagined dystopias were but a premonition of the 21st-century reality.

Future Wende exhibitions will treat Russian Perestroika paintings; the art of Sun Mu, North Korean propaganda artist-defector; Eastern Bloc television. The Wende is also inaugurating a notably adventurous music program this fall. Maybe the takeaway is that all ages and cultures have an Other, and the Wende is L.A.'s Museum of Otherness. Consider that the opposite of a selfie-museum; an invitation to contemplate ourselves through the most awesome filter of all—the lens of history.