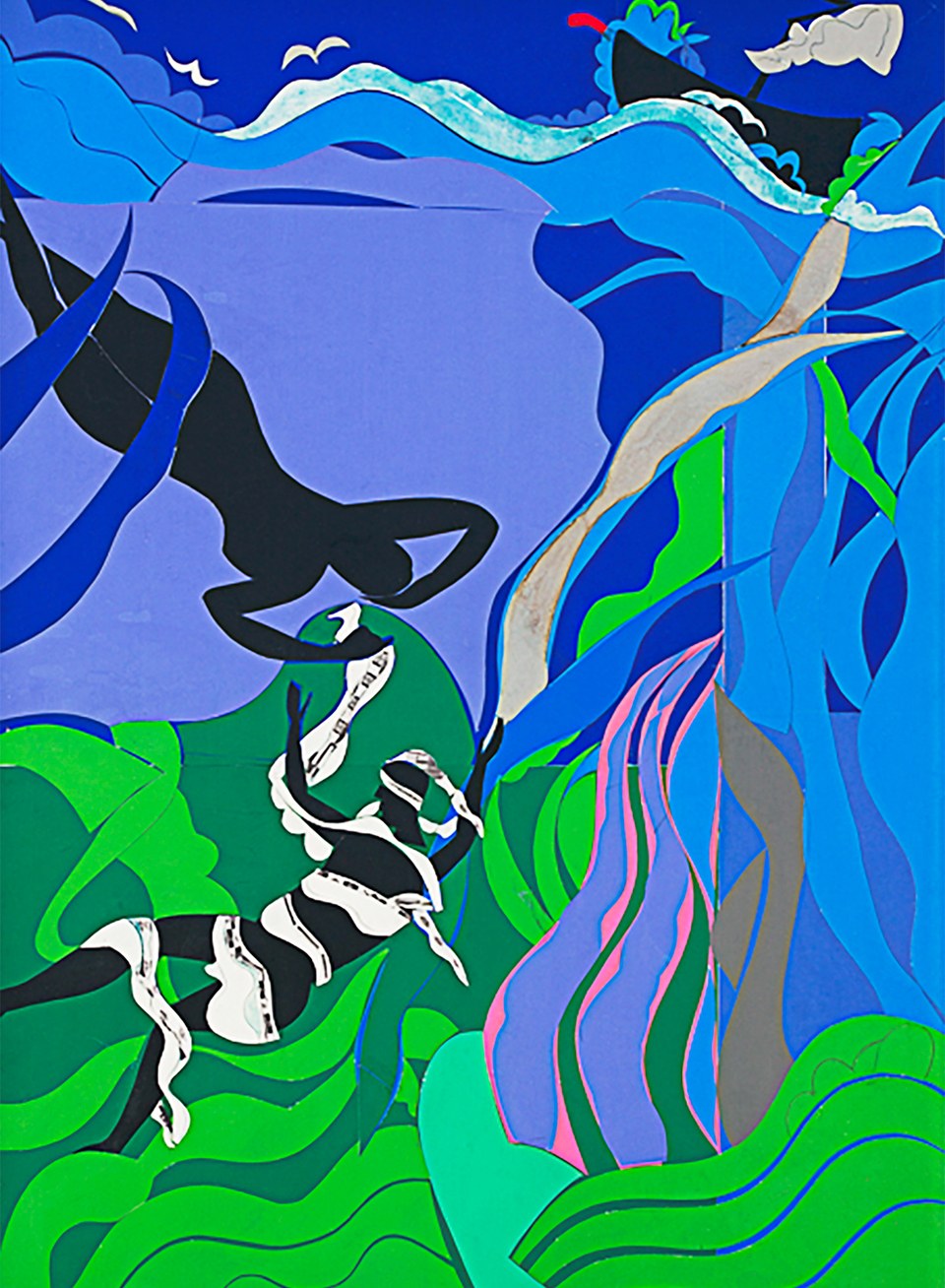 Paul Goldberger has a Vanity Fair piece on how the Lucas Museum of Narrative Art landed in "the least likely of cities." (I'll take that over "only in L.A.…") The article mentions several works recently added to the prospective museum's collection, among them collages from Romare Bearden's Odysseus series (above, The Sea Nymph, 1977) and three large mural paintings by Thomas Hart Benton.

The Bentons are from the American Historical Epic, created 1924-27. Most of the oil-on-canvas panels, each about five feet high, are in the Nelson-Atkins Museum, Kansas City. Though Benton's representational art and outrageous sexism fell out of fashion, he was no Norman Rockwell. Benton was a democratic socialist who saw U.S. history as a series of tragedies. The most interesting of the Lucas panels, Religion (The Witch), shows the conclusion of an American witch hunt. The accused begs for Christian mercy that will not be forthcoming. Benton didn't approve of "mannish" women, but the long, tall one at right is an amazing invention. The gallows looms against a hill that is also a breast.
These panels will be the most notable examples of Benton's art in Los Angeles. When shown at TEFAF New York last year, gallerist Bernard Goldberg quoted an asking price of "more than $20m."
The Lucas is also acquiring works of African-American artists: Bearden, Jacob Lawrence, Gordon Parks, Kerry James Marshall, Carrie Mae Weems, and Kara Walker. It seems the Lucas has decided that woke black art is narrative art.
Bearden's Odysseus cycle, recently the subject of a traveling exhibition, transposes the Greek epic to the West African kingdom of Benin. Bearden created 20 collages, shown in New York in 1977 and quickly dispersed. A few are now in museums (Chicago Art Institute, Mount Holyoke College Art Museum). The Lucas'  Sea Nymph and Scylla and Charybdis show Bearden at his most lyrical and Matissean.
It's hard not to notice that these black "narrative artists" in the Lucas collection are more critically appreciated than 98+ percent of the white ones are. These acquisitions apparently reflect the advice of wife Mellody Hobson and curator Don Bacigalupi (who helped upgrade Alice Walton's collection). The Lawrence and Bearden pieces are superior to the ones Bacigalupi bought for Crystal Bridges; better than anything by these artists in Los Angeles, even at the Lucas' perpetually underfunded neighbor, the California African American Museum. 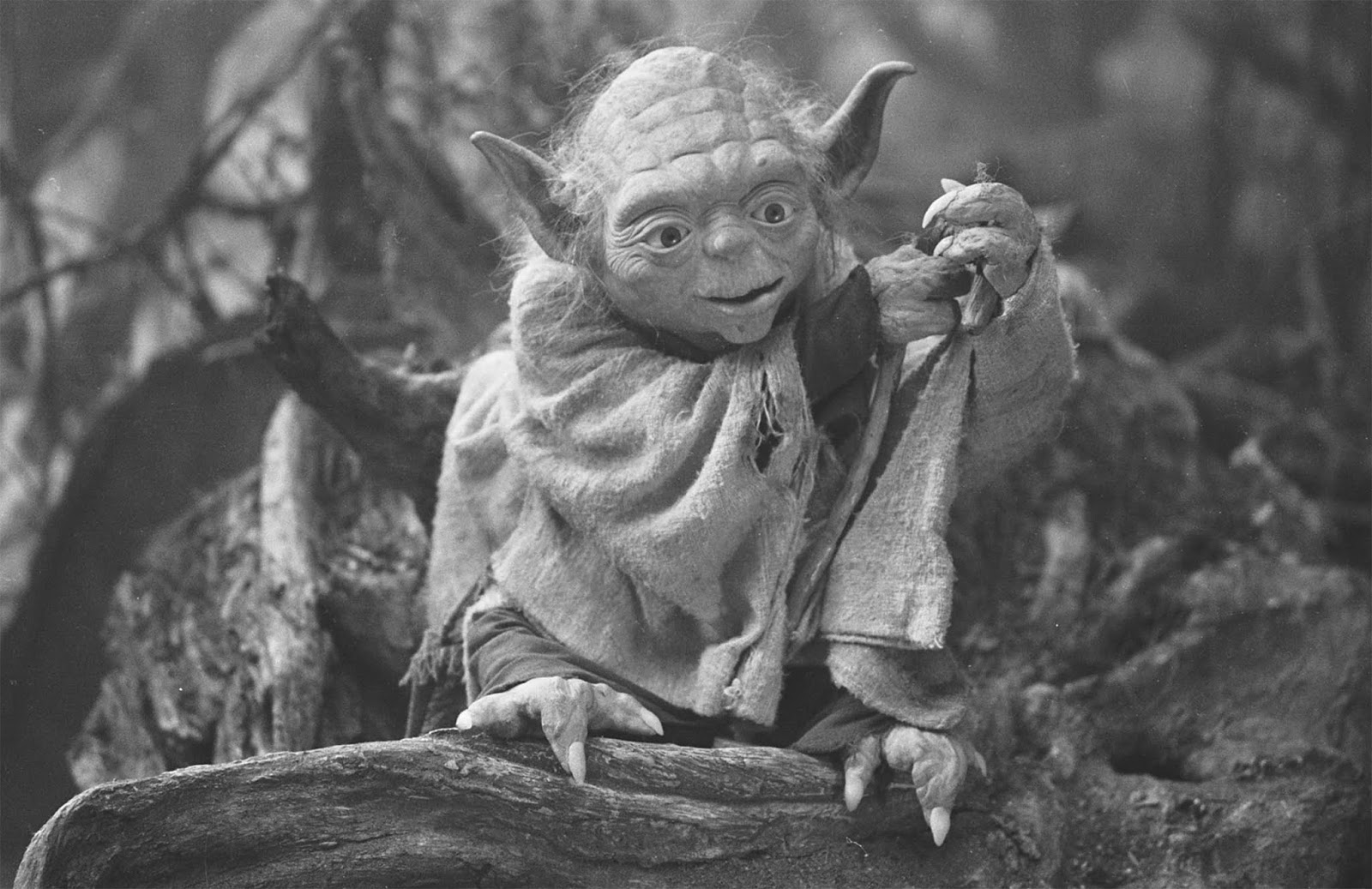 Obvious question: Why show Jacob Lawrence next to Yoda? Beats me. But should the Lucas so choose, it could assemble a fantastic collection of African-American modernism for the price of another Norman Rockwell.
MORE ON THE LUCAS COLLECTION:

More Thoughts on the Lucas Museum of Narrative Art

Anonymous said…
Gordon Parks' "Store Front" is a fantastic work. For people who appreciate technical skill all by itself (such as in a Chuck Close canvas), that alone makes it the type of work worth spending a lot of time in front of.

As for Romare Bearden's "Scylla and Charybdis"? Something about that painting looks tentative, unpolished to me. However, it may be more impressive when seen in person. The composition makes me think of something done by a student in a high school art class.

The Lawrence "Harlem Street Scene" is quaint and appealing in a Grandma Moses' way.

I notice as with the art critic for the SF newspaper, Paul Goldberger - who too has seen a sampling of the collection at Lucas's home - also said it has more value and potential than casual outsiders or skeptics have assumed. Not sure, however, if the LA Times critic's characterization of "treacle" will change since beauty (etc, etc) is altogether in the eye of the beholder.

The Lucas is likely going to add a facet to the nature of art museums that's greatly needed. It probably won't be as easy to make it a quick run-through as, by contrast, museums like the Broad or Marciano tend to be.

Anonymous said…
Oops. Park's work actually is a photograph. It's still a nice piece, however. But the technical skill came more from a camera lens than a human arm and hand attached to a paint brush.

Beyond that, I can hardly wait to see the Lucas Museum in completed form.