Michelangelo at the Getty 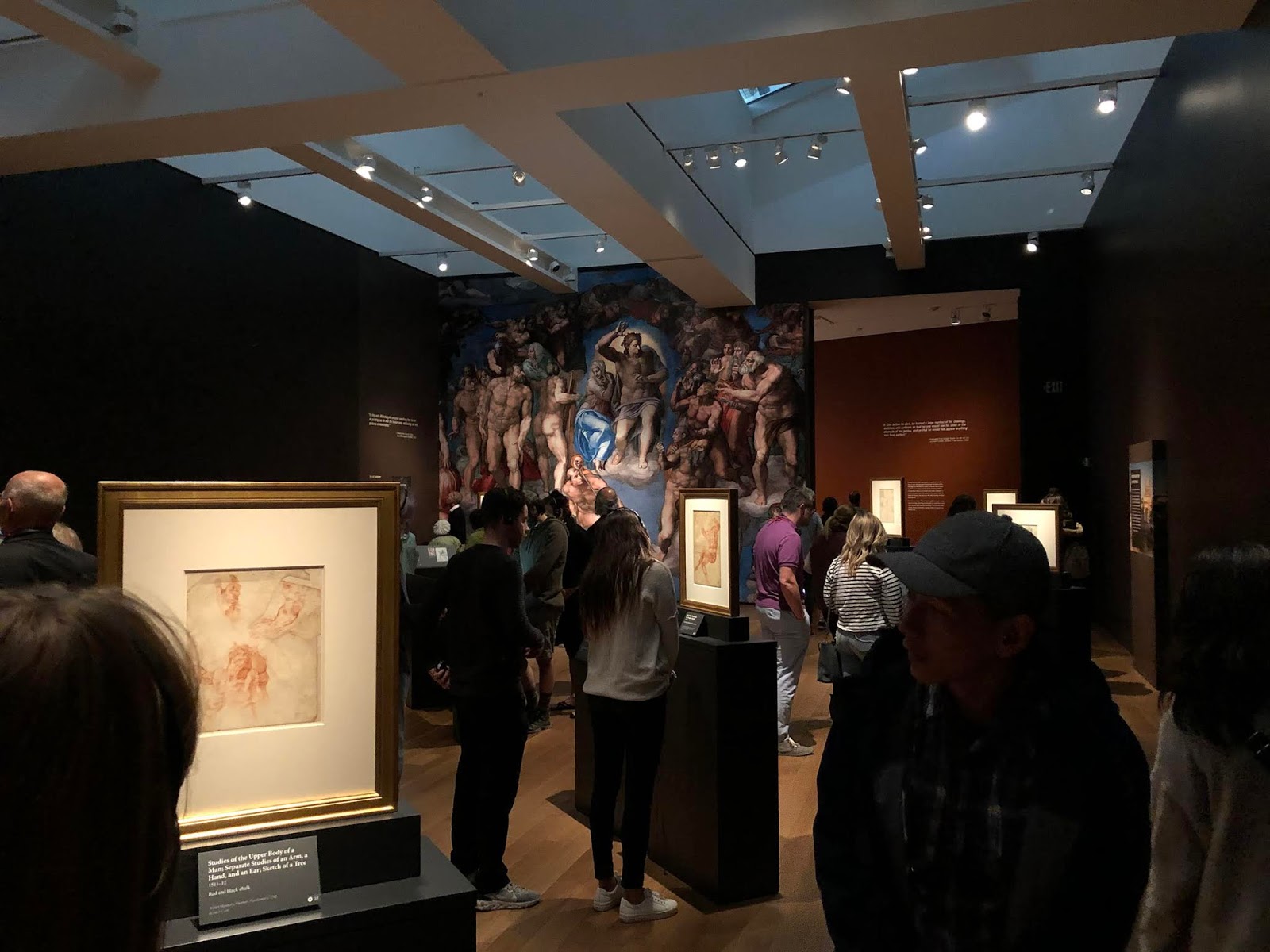 Michelangelo is estimated to have made ~20,000 drawings in his long career. He burned nearly all, claimed Vasari, lest anyone second-guess his genius. About 600 Michelangelo drawings survive. That's still a lot relative to other Renaissance draftsmen. But Michelangelo's drawings are concentrated in a few European institutions. His Florence house-museum, the Casa Buonarroti, has 205.

The Getty Museum's "Michelangelo: Mind of the Master" presents 28 sheets by the title artist, all but three from the Teylers Museum (Haarlem, Netherlands). That may not sound like much, but about half are double-sided and displayed to reveal recto and verso. As installed here, with life-size reproductions of related frescos and sculptures, the show fills the Getty's entire exhibition pavilion.
Most of the Teylers drawings were assembled by Christina of Sweden, the lesbian queen (everyone now thinks) who scandalously refused to marry, converted to Catholicism, and retired to Rome to collect art. Christina owned two notable paintings now at the Getty (a version of Titian's Venus and Adonis and Hans Hoffmann's Hare in the Forest). Her collection of 1700 drawings included series of works by Raphael and Michelangelo.

Christina bequeathed her collection to a cardinal friend. In 1790 Holland's Teylers Museum acquired Christina's drawings through the agency of Dutch politician and diplomat Willem Anne Lestevenon. In this circuitous way the Teylers came to have the best Michelangelo collection that no one's ever heard of. Christina sought drawings connected to Michelangelo's greatest projects. "Mind of the Master" assembles some of the few works that can be connected with the Sistine Chapel ceiling and the Last Judgment; also for the unrealized Battle of Cascina fresco, the figure of Day in the Medici tomb, and architectural designs for St. Peter's Basilica.
The Teylers is a modestly-sized through architecturally grand museum covering art, science, and history. Think the Haarlem Museum of Jurassic Technology. It's off the tourist track for Italian Renaissance art, and its drawings are rarely on view.

The Metropolitan Museum requested Teyler loans for its much bigger 2017-2018 show of Michelangelo drawings. It's said the Teylers refused because it didn't want its drawings to get lost in the Met show.
"Mind of the Master" debuted at the Cleveland Museum of Art last year. There it was a full-fledged blockbuster with timed ($15) tickets. Thankfully the Getty has skipped that. The show includes a Cleveland drawing and both the Getty's Michelangelo drawings. There's also a single work by Daniele da Volterra, inevitably identified as the guy who painted loincloths on Michelangelo's Last Judgment. He wasn't a prude; he was a follower and friend, present at Michelangelo's deathbed. Daniele is represented here with a portrait drawing of his seventy-something mentor.

By conventional museology, reproductions are bad and drawings shouldn't be overpowered by large colorful paintings (least of all reproductions thereof). I was surprised at how well the photomurals worked here. One Teylers drawing studies the hand of God in the Sistine ceiling, the most famous gesture in Western art. In the drawing it's rotated 90 degrees and easy to miss. In fact some long-ago collector cut it out of the sheet, and it was restored to its proper place only recently. In this case you do want to be reminded of the famous painting and to have the opportunity to compare. There are multiple correspondences between The Creation of Adam and the drawings on view, pointed out in gallery text graphics and touchscreens. 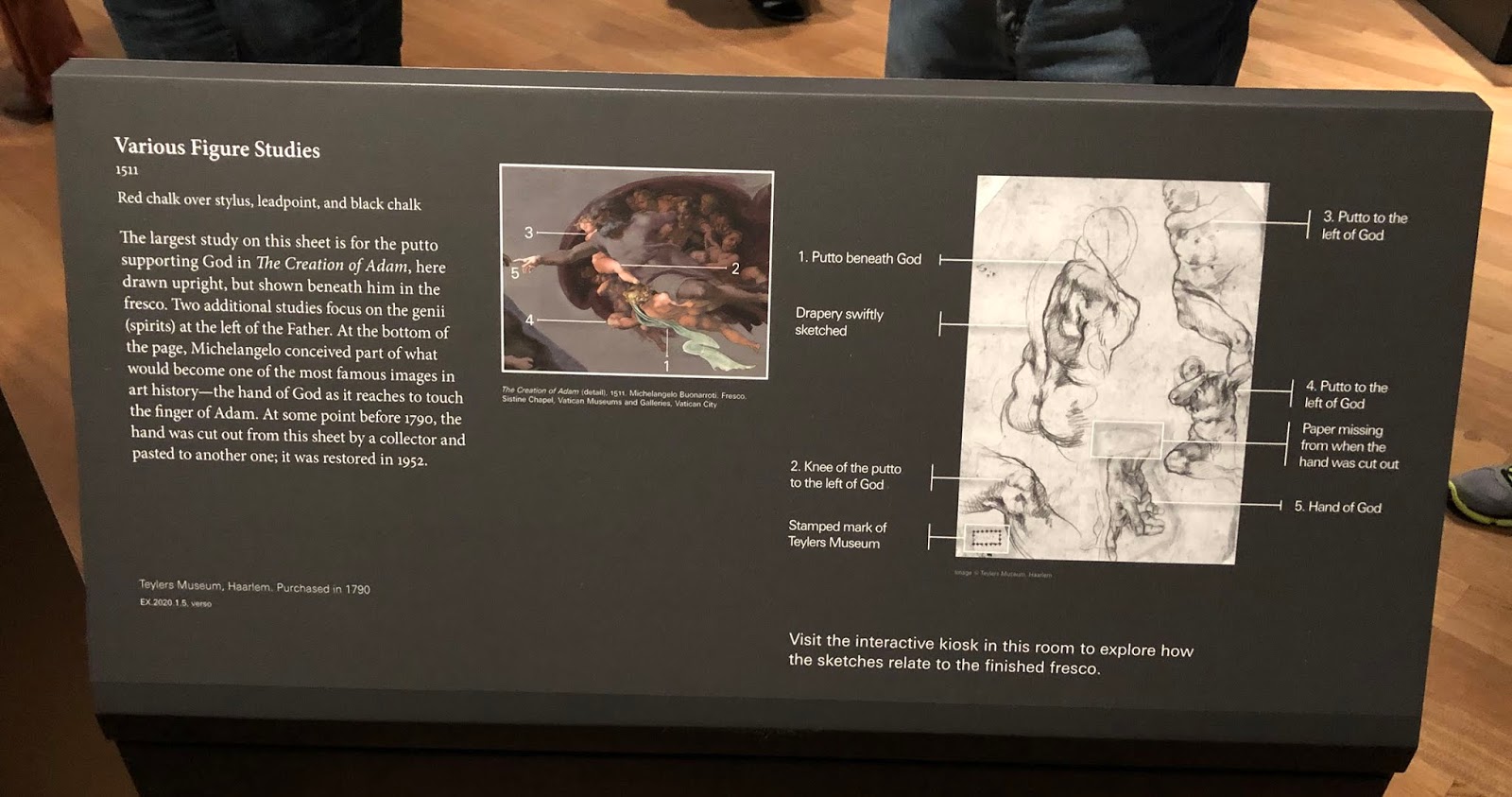 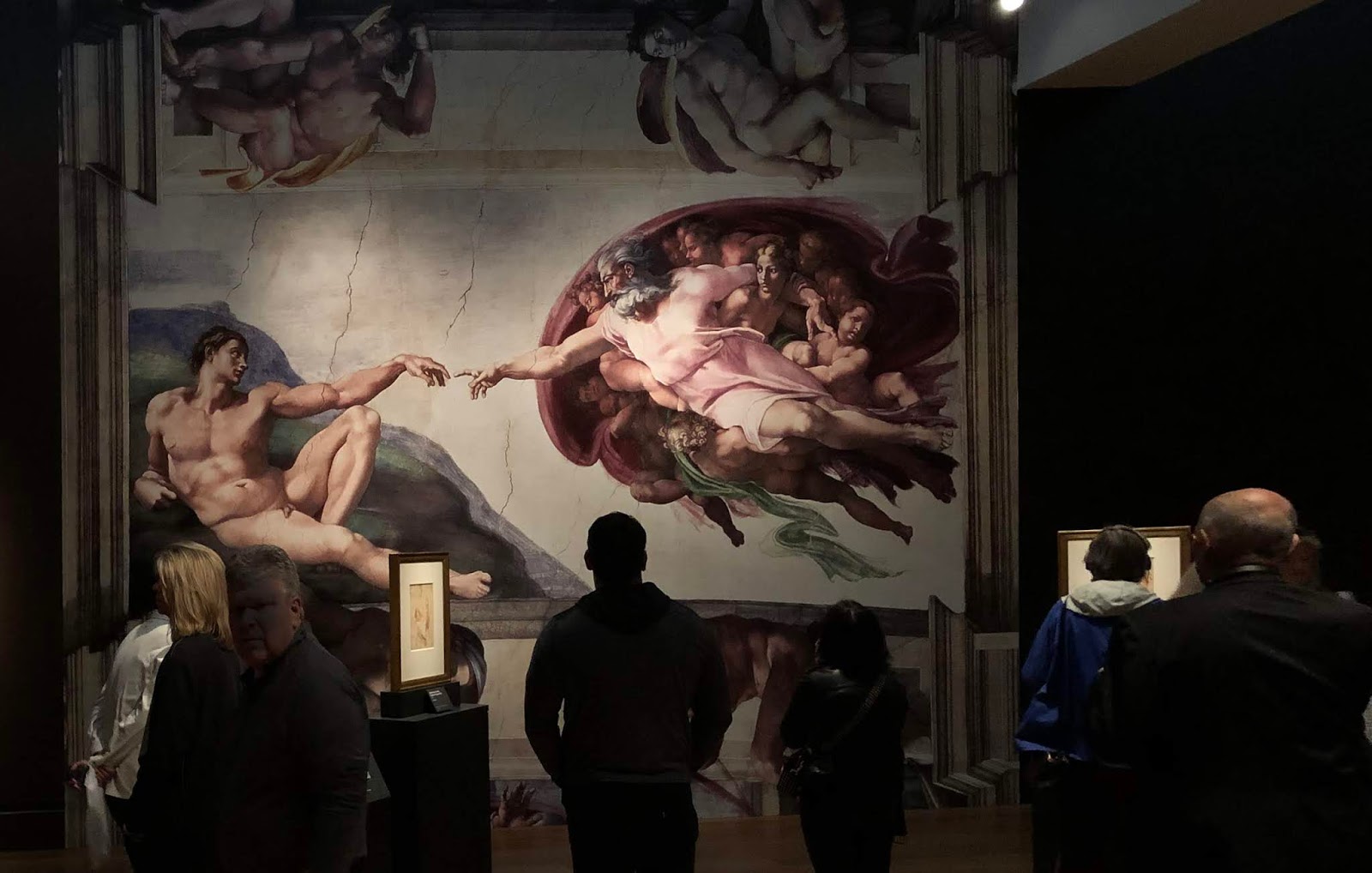 P.S. It's the 500th anniversary of the birth of Michelangelo's arch-rival Raphael. This is being commemorated around the globe, including at the Norton Simon Museum, the only local institution to have a Raphael painting. The Getty has installed its three or four Raphael drawings in a one-room, off-menu/website celebration. How many museums have a Michelangelo and a Raphael drawing show (kind of) at the same time? 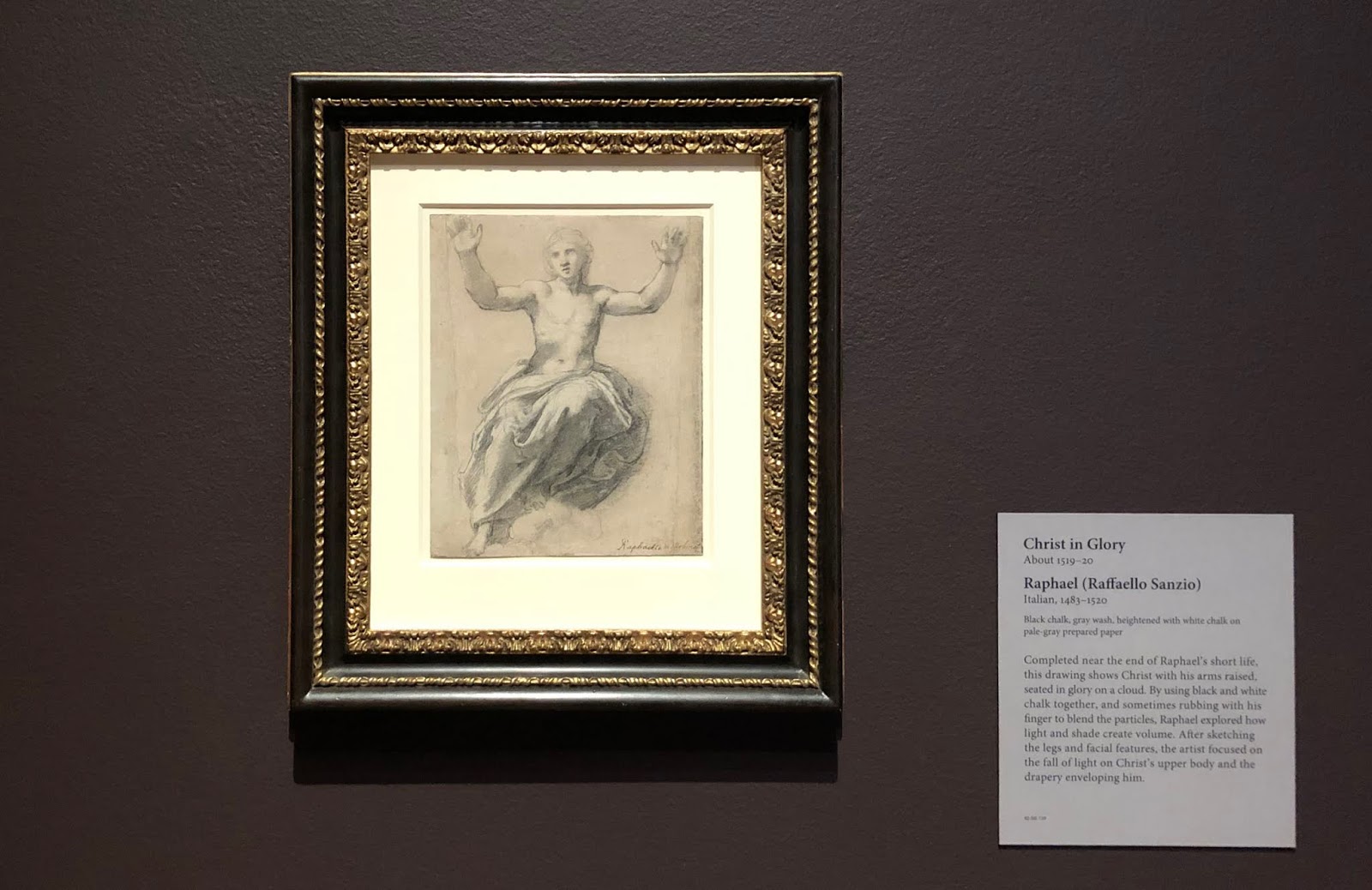 I'm still annoyed that the Hammer/UCLA sold its da Vinci Codex Leicester several years ago. Although that was more of a working document than an artistic one, when big names like Michelangelo and Leonardo da Vinci are up for grabs, you'd still don't take such things lightly. Or claim, as a local museum director did recently, that the word "masterpiece" doesn't necessarily apply to artworks in today's world.
March 2, 2020 at 9:13 AM