Paolo Veneziano (c. 1295 to c. 1362) is getting his first single-artist show at age c. 726. The Getty Center's "Paolo Veneziano: Art and Devotion in 14th-Century Venice," through Oct. 3, 2021, is one room with ten paintings plus a few comparative works. That is is big enough to hint at how Paolo's color harmonies prefigured that of the Bellinis, Titian, and Veronese. It also provides an introduction to Paolo's innovative use of pattern. In The Birth and First Miracle of Saint Nicholas, Baby Claus delivers a sermon one hour after his birth, yet the eye is drawn to the jazzy, op-art stripes of the bed and the elegant pattern of the red pillow. 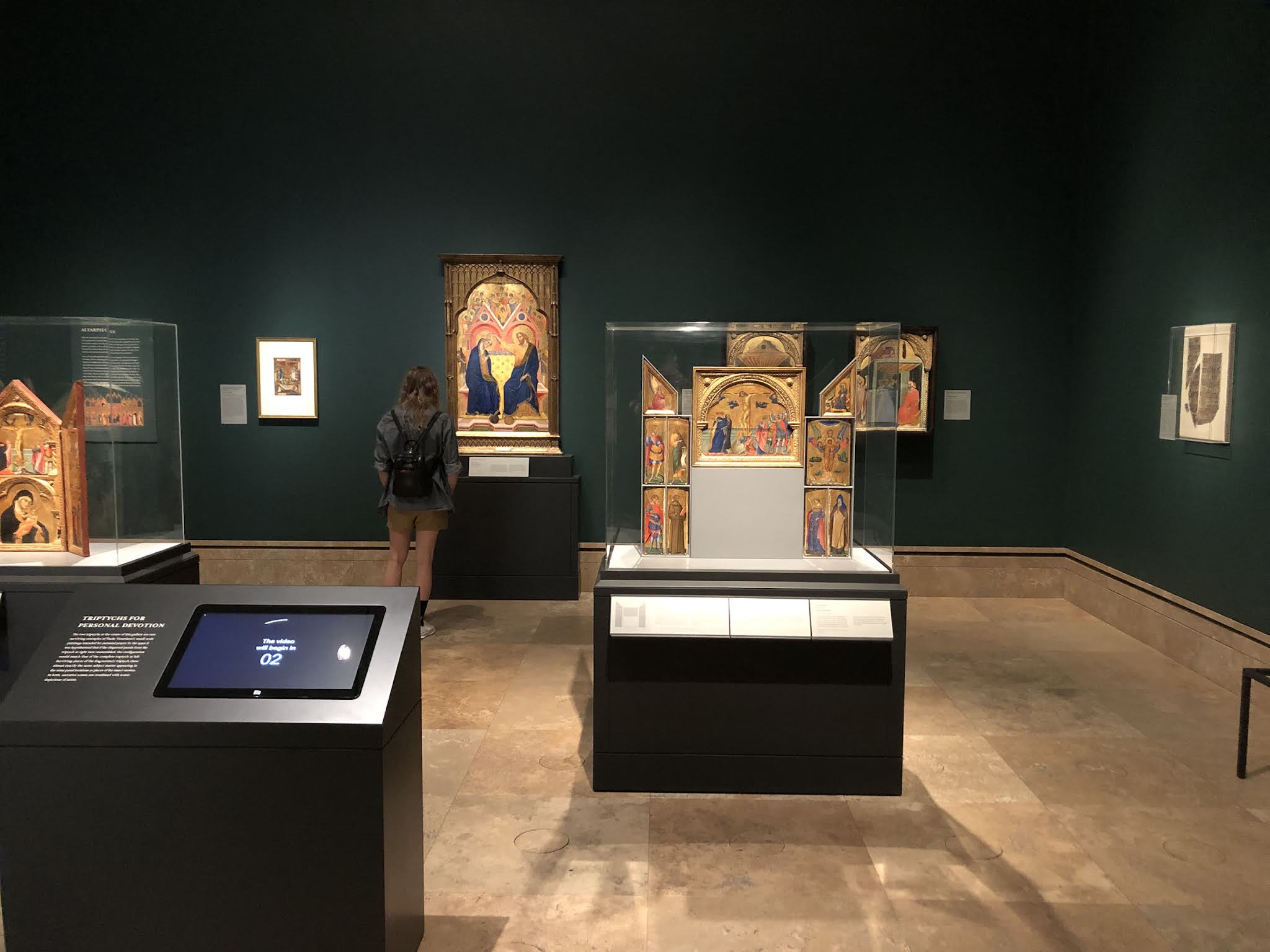 The show was prompted by two tiny panels of the Annunciation that the Getty bought in 1987. Less than 9 inches high, they are normally overlooked by most Getty visitors. They once formed part of a private altarpiece that was sliced and diced for the art market. Fragments of the so-called Worcester Triptych landed in museums in Worcester, Mass., Washington, D.C., and L.A. The show reuinites and reassembles the surviving panels. Missing is a Madonna that once anchored the piece. A Louvre Madonna and Child, also on view, had been proposed as the missing image, but the show's organizers learned it's too big to fit into the space.
The Getty's Annunciation is a creation of some long-ago dealer. Originally the two sides were right triangles. The inner corners were chopped off to allow them to be joined into a mini-diptych.
A 14th-century Persian textile is contemporary with those that Paolo must have known in Venice, a nexus of East-West trade. It was woven from cultural appropriation no less than silk. The birds mimic Chinese phoenixes; the bilateral symmetry is ancient Near Eastern; the five-lobed grape leaves are an Italian thing.

The patterns of Paolo's painted fabrics do not conform to the folds of the painted fabric but exist in their own otherworldly plane. This rejection of incipient 3D naturalism in favor of a pattern-dense uncanny valley became an element of the evolving International Gothic Style.

A particularly choice example is the 1358 Coronation of the Virgin, created in collaboration with son Giovanni and considered to be Paolo's last painting. It's a rare loan from the Frick Collection, which conceived the show in collaboration with the Getty but had to drop out as a second venue because of pandemic scheduling.