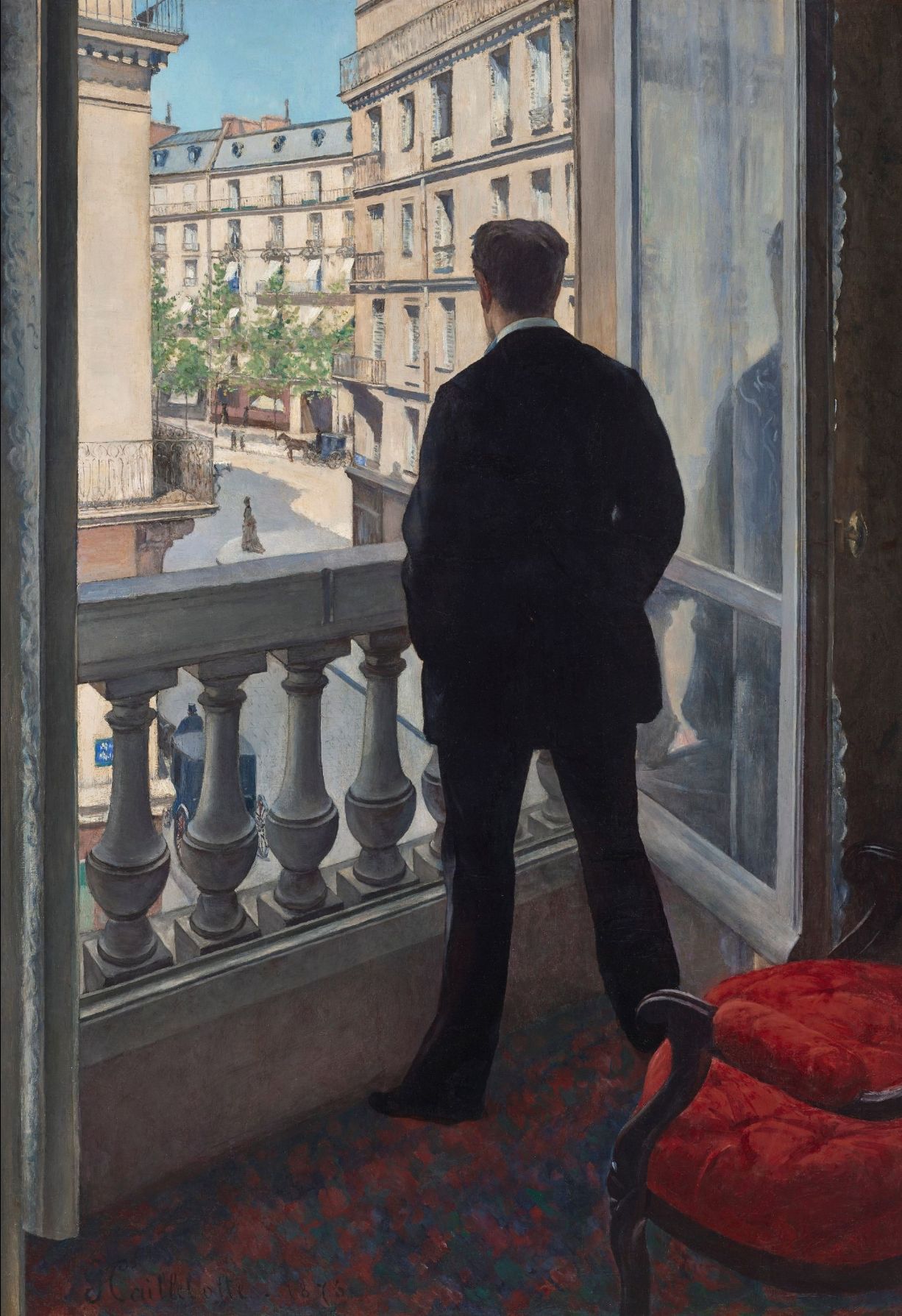 The Getty Museum was successful bidder for Gustave Caillebotte's Young Man at His Window (1876) at Christie's New York. Sold from the collection of Texas oil man Edwin Lochridge Cox, is went for a record $53 million.
Caillebotte is admired for his cinematic views of urban life. The motif of a figure looking out a window has its roots in Caspar David Friedrich, but Caillebotte's landscape is modern Paris. The subject (the artist's younger brother René) is apparently transfixed by an elegantly dressed woman on the street below. Shown at the second Impressionist exhibition, Young Man at His Window has been widely exhibited and published. Measuring about 46 by 32 inches, it becomes the Getty's first Caillebotte and will add another star picture to the group of Impressionist paintings. Of the few Caillebotte works in U.S. museums, only the Chicago Art Institute's great Paris Street; Rainy Day (1877) rivals it.
Claude Monet had hoped that Young Man at His Window would be included in Caillebotte's bequest of Impressionist paintings to the French state, but it was owned by Albert Courtier, a friend of the artist. Later acquired by Wildenstein & Co. and then Cox, the painting became one of the last pivotal Caillebottes to remain in private hands.
The Getty's 19th-century galleries are currently undergoing renovation. Young Man at His Window is to go on view in 2022.
Also at Christies, UCLA sold a 1930 Picasso, Profil, it had owned since 1959 but rarely if ever displayed. It went for $7.3 million, in line with estimates. The money will be used for acquisitions of historic and contemporary works on paper. The UCLA Hammer Museum is to open a new space for the Grunwald Center early next year.
UPDATE (Dec. 16, 2021): The Caillebotte Young Man at His Window is now on view in "Getty Highlights" in the Exhibition Pavilion.
Email Post
Labels: Getty Museum Gustave Caillebotte Picasso UCLA UCLA Hammer Museum

Anonymous said…
As iconic as Manet’s Spring, A+. But that means some lesser though good impressionist paintings will likely go to storage. Nonetheless, so exciting.
November 11, 2021 at 6:40 PM

Apparently, LACMA has been promised a Caillebotte from the Perenchio collection. Not sure if they’ve already received it though.
November 11, 2021 at 6:42 PM

Anonymous said…
What a difference 21+ years makes. Another Caillebotte painting of a man at a balcony sold at auction in 2000 for $14.3 million. (The Getty could have saved a lot of money.)

In the lot essay for the other painting (L’Homme au balcon, boulevard Haussmann), Christie's claims that the Getty painting was not as groundbreaking as the other painting. Basically, it comes down to this: In the "boulevard Haussmann" painting, the painting frames the space, hence it’s a more abstract representation of space. In the Getty painting, the space still frames the painting, hence it is still quite representational.

William Poundstone said…
Auction houses are pretty good at coming up with superlatives for whatever they're selling at the time!

Both paintings are fantastic. By 1880 Caillebotte was moving towards the painterly flatness of Monet. But the 1876 painting—and Floor Scrapers, and Paris Street; Rainy Day—showcase Caillebotte's most original contribution, the urban view with unusual perspective and pointed lack of narrative or moral. From today's vantage point, that seems to anticipate 20th-century photography and film, and it's this that distinguishes Caillebotte from his colleagues.
November 12, 2021 at 9:57 AM

Ted Gallagher NYC said…
Yowzah! That's a monster of a price. Getty is lucky it's rich.
Love, love, love Caillebotte.
My local Met has nothing of his like this. Although it does have his mesmerizing "Chrysanthemums in the Garden at Petit-Gennevilliers", of 1893...A veritable 10,000 Fourths of July, on steroids.
November 12, 2021 at 11:18 AM

Anonymous said…
A really exciting acquisition for the Getty. Don’t know what’s going to be bigger event: to see this or the monumental Bassano painting.
November 12, 2021 at 6:15 PM

Anonymous said…
The Getty has been killing it with these acquisitions! I’ve always been slightly underwhelmed when visiting the Getty’s art collections. It always seems to be overshadowed by its magnificent buildings and gardens. It looks like The Getty is trying to correct that. I wonder if the Getty will expand their galleries soon since they’ve been purchasing so much art lately?
November 12, 2021 at 6:36 PM

Anonymous said…
^ Word on the street is the Getty's director wants to tear down Meier's buildings and replace them with a cantilevered one-story structure. Someone said it will have even less exhibit space than what's currently there.

The director supposedly also wants to have the museum's budget re-directed to contemporary works that appeal to hipsters and other Hollywood types. But it's only a rumor.

Fortunately, the LA area already has a few other semi-general-interest, older-history-oriented art museums. So if the Getty is dismantled it won't leave too much of a gap.

Thank God for the Huntington and Norton Simon. Although the Pasadena area is kind of a schlepp from points west.

Incidentally, a weakened stock market in the future probably won't hurt the Getty's or other museum's budgets, as what occurred over 10 years ago. So a lot of red ink shouldn't be too much of a problem if the Getty is demolished and re-built.
November 13, 2021 at 5:27 PM

Anonymous said…
Along with the Manet’s Rue Mosnier, the Getty has the foundation of an exhibit looking at how impressionists depicted Paris. Pair that with Renoir’s Pont des Arts from Norton Simon and the Hammer’s Pissarro Boulevard Montmartre, Mardi Gras, there’s a nice exhibition core. The Caillebotte ads another dimension to the collection. I agree with the comments on gallery space. It’s been years since I last saw Manet’s Rue Mosnier in the west pavilion, there simply isn’t enough space for it all. That Bassano will permanently displace 1/4 of the Venetian renaissance gallery. Anyone know whether the renovations to the 19th century galleries will add any wall space?
November 13, 2021 at 5:34 PM

Yes, it’s true that auction houses hype what they are selling. That goes without saying.

But if that is equally true about both lot essays why is it that only the lot essay for the painting "L’Homme au balcon, boulevard Haussmann" dares to say that it represents “a considerable leap forward”? And, it’s not just a leap forward in general; it’s a leap forward from the Getty painting.

... That’s not to say the Getty painting is a bad painting. It’s the archetype for all Caillebotte's paintings with a man in black silhouette. Together with all such paintings, it may be the precursor in art history for male subjects framed in silhouette from the back. I am thinking here of Magritte’s man in a bowler hat and also Matt Saunder’s portraits of Thomas Mann and Cary Grant. (Saunders is a contemporary artist represented by Marian Goodman and Blum & Poe.)

mughound said…
You could chalk it up to different writers. Even if given a theoretical choice between Man at the Window and Man on a Balcony, I’d personally prefer the Getty keep the one it's got. Not to say I have any idea which is the better painting between the two. But this is a better fit for the Getty which doesn’t have many works with the psychological nuances Window has. No doubt for that reason, this is more of a crowd-pleaser than the Balcony painting. It’s hard to compare as both are very different. Stylistically, Balcony is closer to his impressionist tendancies with Window leaning towards realism.

But from comparing Christie’s lot essays for both, the Getty painting has been exhibited and in literature significantly more times than the Balcony painting, so it’s likely the more famous and recognizable work for what it’s worth. The Getty website says it's regarded as his most important painting in private hands (Balcony is also still in private hands). And from what I surmise from other sources, I’d bet more on the Getty painting despite Balcony’s more enthusiastic lot essay.

Seems we have good examples of his work in museums spread across the country despite the rarity here. In addition to all the others mentioned, Kimbell has a fantastic one that's closer in style to Rainy Day. Christie’s sold an oil sketch of the Kimbell painting for $8M in 2018. They also referred to Kimbell’s original as “monumental” and “iconic” in the lot essay. So yeah, Christie’s is very liberal with the superlatives.
November 13, 2021 at 10:59 PM

mughound said…
With regards to the space issue at the Getty, I don’t see that being a problem any time soon. The rooms at the Getty still feels sparse, too meticulous, almost minimalist. Compared to other major museums, the Getty is very generous with how it spaces paintings. It’s possible that’s a reason why the collection feels underwhelming to a lot of people. It might be visually more stimulating if they crowded their walls a bit more.

And they could always resort to installing a wall in the middle of the room if they really do run out of space. I can see that working as a dramatic presentation for something as large as the Bassano painting.
November 13, 2021 at 11:28 PM