Pashgian's "Primavera" Is a Sculpture That Can't Be Photographed

Commissioned for last year's opening of Pomona College's Benton Museum of Art, Helen Pashgian's Primavera defies being captured in a photograph (or words). At top is a professional press photograph from the Benton website. It looks like a snow-blind Ganzfeld effect, or maybe an Uta Barth photograph, or even a radial gradient in Photoshop, from absinthe green to greige. Nothing of the work's size, shape, or medium is evident.
Spoiler alert: Below is the most revealing of several grainy iPhone shots I took. The central object of Primavera is a ghostly translucent disk, supported by a transparent stem from the floor. The disk's illumination, from lights on either side of a white-cube proscenium, cycles between very dark and less dark. Before my eyes adjusted to the lighting, the room appeared to be empty (I wondered whether the work had been taken off view). At the peak of the short illumination cycle, the disk casts two clear shadows. The green disk blends seamlessly into the wall. An afterimage effect lends a subtle rose hue to the wall. The green-pink contrast, existing in the viewer's mind, is a Matissean accent that can't be captured in a photograph at all. I would further warn that the photo strikes me as entirely unlike the remembered experience. You really have to be there.

Pashgian is rethinking Robert Irwin's disks of the late 1960s. Irwin's aluminum disks were illuminated by four spotlights arrayed in space, making the disk's circumference nearly imperceptible. Here Pashgian works with time: the Light and Space "slow time" is fast-forwarded. The artist's title conjoins Botticelli's eternal spring with a premonition of decay and a natural cycle out of balance. When the house lights come up, the green spring is a dandelion head gone to seed. 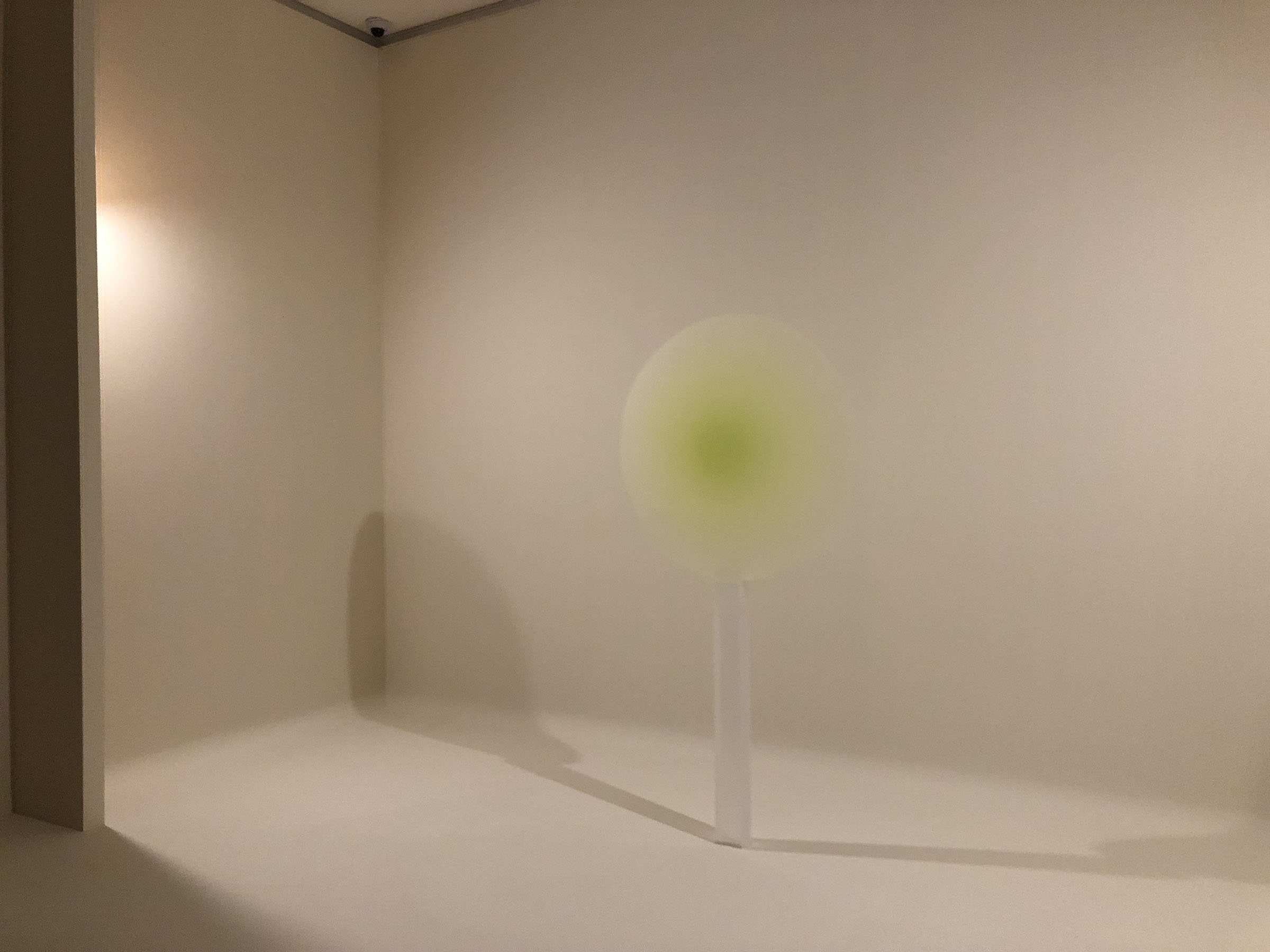 Ted Gallagher NYC said…
Fascinating.
On the museum website it says her art "contains" illumination.
I checked for her at the Met and MoMA. No joy. Sad.
So, I went to the New Museum. Evidently there's no search function for artists, or to its permanent collection...what slackers. I assume it has one. Tragic.
*
Following is further text from Benton's web site:

Helen Pashgian is a pioneer of the 1960s Light and Space movement in Southern California. Over the course of her career, Pashgian has produced a significant series of sculptures comprised of vibrantly colored columns, discs, and spheres that often feature an isolated element appearing suspended, embedded, or encased within. Using an innovative application of industrial epoxies, plastics, and resins, Pashgian’s works are characterized by their semi-translucent surfaces that appear to filter and somehow contain illumination. For Pashgian, she thinks of her works as “presences” in space—presences that do not reveal everything at once.

Trained as an art historian with a focus on seventeenth-century Dutch art, Pashgian’s reverence for painter Johannes Vermeer has been fundamental to her longstanding interest in the effects and perception of light. While she has gravitated towards experimenting with non-traditional materials, her primary concern has always been to maintain light as the object and subject of her work. For the artist, light is not simply a metaphor, symbol, or allegory; light itself is both the medium and the message.
May 2, 2022 at 9:01 AM