Australian Desert “Icons” at the Fowler 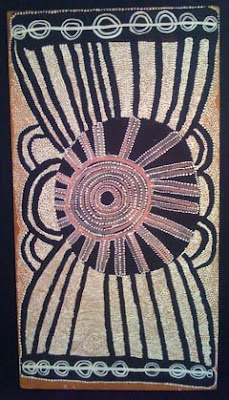 The UCLA Fowler Museum has a pair of Australian painting shows: "Icons of the Desert," a traveling exhibition organized by Cornell's Herbert F. Johnson Museum; and "Innovations in Western Desert Painting." Both are single-collector shows, "Icons" drawn from the collection of New Yorkers John and Barbara Wilkerson and "Innovations" from the Santa Monica-based Kelton Foundation. All the usual reservations about single-collector shows apply. It's especially disconcerting to have two juxtaposed shows with overlapping time frames. That said, the work is fantastic. An ideal survey, drawing from any and all lenders, would necessarily include many of the pieces here, such as Johnny Warangkula Tjupurrula's Water Dreaming at Kalipinypa, a Mona Lisa of Australia's acrylic-on-masonite renaissance. (I would have posted a .jpg but the one on the exhibition website doesn't do it justice. I'll settle for this cellphone photo of The Trial, by Charlie Tarawa Tjungurrayi).
Not that there's much wrong with the generally superb exhibition website. It even offers a Google v. Papunya-school smackdown. Aboriginal paintings are understood as schematic maps or aerial views of sacred sites. Check out the exhibition site's Google Maps view of Papunya and then compare the palette and "found" abstraction to the paintings. A recent New York Times piece presents Google as the Mr. Spock of web design. Every aesthetic decision, like the width of a five-pixel line, is user-tested. Is that the polar opposite of the Papunya painters, or simply an alternate form of divine madness? It is said that many of the Australians, on first contact with paintbrushes and acrylics, confidently began painting works now rated art-historic masterpieces. 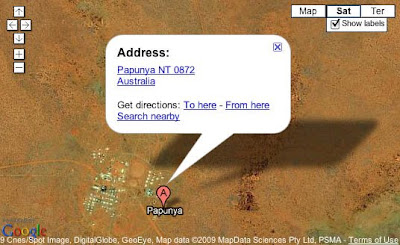 The European renaissance also played with bird's-eye-view maps and pictures that were maps (such as Taddeo di Bartolo's fresco Map of Rome, ripped off by the Limbourg brothers in their Très Riches Heures). The Google map, with its trompe l'oeil drop shadow behind a flat "cartoon balloon" recapitulates issues the Australians tackled head-on in the 1970s outback.
Email Post
Labels: Charlie Tarawa Tjungurrayi Fowler Museum Google Maps Johnny Warangkula Tjupurrula