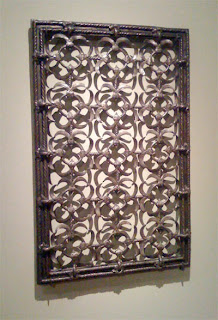 The New York-based American Decorative Art 1900 Foundation has given LACMA a bowl by Marie Zimmermann and has promised to donate the metalwork screen by Samuel Yellin (pictured) that has been on view since the new American galleries opened. The ADA 1900 was founded by Bruce Barnes, a collector and scholar. Barnes' intentions for his 300-piece collection, spanning Arts and Crafts and early modernism, have sparked speculation in the museum world. The foundation website says it works closely “with curators at more than twenty museums on scholarship, exhibitions, and object research, conservation and installation.” ADA-1900 has donated some works to institutions from coast to coast and has helped organize such shows as LACMA’s “Arts and Crafts in Europe” and an upcoming survey of Charles Rohlfs’ furniture, to be shown at the Huntington.
Samuel Yellin’s grilles, in the most modern pseudo-Gothic styles, grace many stately East Coast buildings. The LACMA piece is to be a gift in honor of Max Palevsky and Jodie Evans.
Email Post
Labels: American Decorative Art 1900 Foundation Bruce Barnes LACMA Marie Zimmermann Samuel Yellin